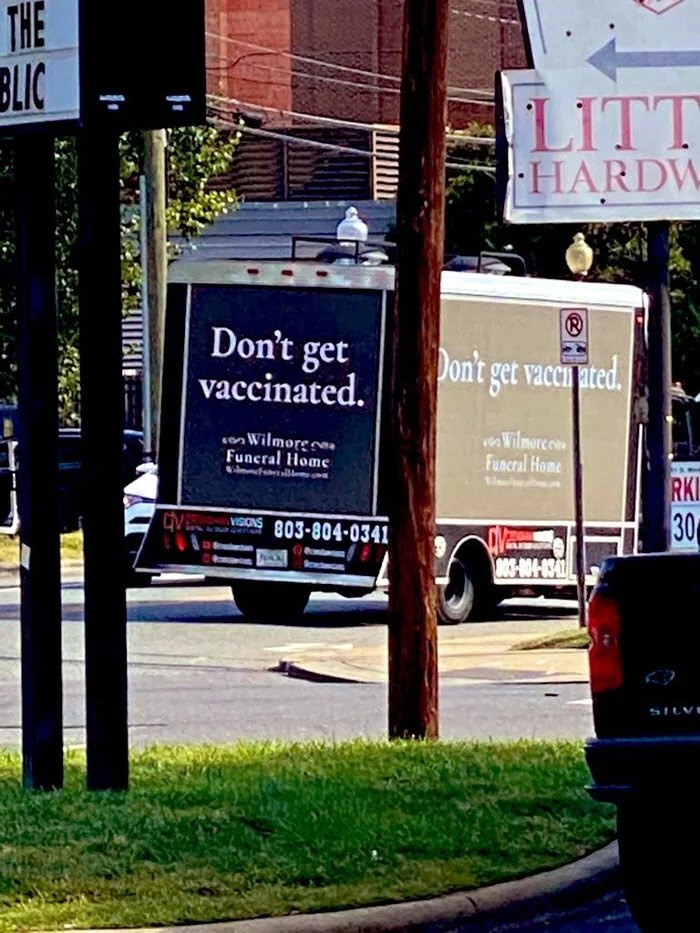 On social networking services (SNS) such as Twitter on the 21st, photos of an advertisement vehicle under the name of a funeral director with the phrase “Do not get vaccinated” that appeared in Charlotte, North Carolina are spreading. Twitter @MeidasTouch

In the southern United States, where Corona 19 is re-spreading, a ‘anti-war advertisement’ has appeared to encourage vaccinations under the guise of a funeral director.

According to the local media Charlotte Observer on the 20th (local time), an advertisement car with the phrase “Do not get vaccinated” appeared near the Bank of America Stadium in Charlotte, North Carolina the day before.

The reversal was the advertising subject written under the phrase. The car was engraved with the name ‘Wilmore Undertaker’ and the address of the undertaker’s website.

On the funeral home’s website written in the advertisement, “Get vaccinated now. Otherwise, you will come (here),” along with a link to the COVID-19 vaccination reservation and information page of Star Med Hospital, a local medical institution, was posted.

It was reported that many spectators witnessed the advertisement during a game between the local team, the Carolina Panthers and the New Orleans Saints, at the Bank of America Stadium that day.

Southern states, including North Carolina, have low coverage due to strong anti-vaccine sentiment. According to the North Carolina Department of Health, the statewide vaccination rate was 46.1 percent, the 11th lowest among the 50 states.

In Mcklenburg County, where the ad was posted, 35 people died from COVID-19 last week, bringing the total to 1,126.