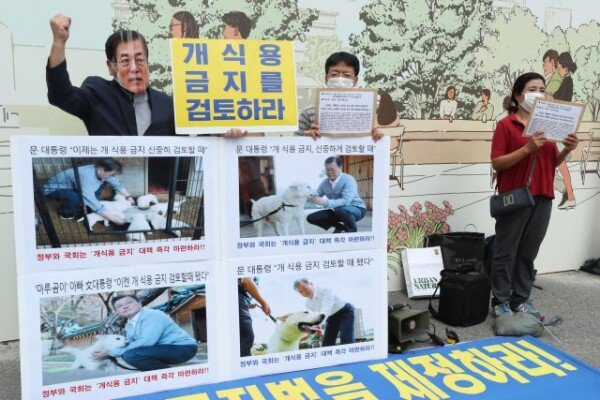 Representatives of 45 animal-related organizations, including the Korea Animal Protection Association, held a press conference at Sejong-ro 4-geori, Jongno-gu, Seoul on the 28th, wearing a mask and calling for measures to ban dog meat, wearing the mask of President Moon Jae-in, who had ordered the previous day to “review the ban on dog meat.”

It was a question I was often asked a few years ago. The question was whether they eat dog meat, but it also meant that we wanted to go eat together. Of course, before that, there were people who just took them to the Bosintang restaurant without asking.

I haven’t heard that question very often lately. This is probably because fewer people eat dog meat, and there are more cases of eating dog meat secretly. One of my friends sometimes eats bosintang, but he says he goes to eat alone without even knowing his family. Some people are cautiously guessing that eating dog meat is already a culture that has virtually disappeared from Korea.

The issue of dog meat has been a hot topic since the 1980s. Because Bridge Bardot, once the best French actress and animal rights activist, criticized Korea’s dog meat culture intensively, saying, “Koreans are savages.” In response, the counterarguments explained with the concept of ‘cultural relativity’, saying, “France also abuses geese to eat foie gras,” “a nation that eats even snails,” gained persuasive power. However, animal lovers argue that for Korea to be recognized as a truly advanced country, a ban on dog meat needs to be enacted. It is the ‘entrance fee’ to enter a truly advanced country. It is the logic that in order to maintain the globalization of the Korean Wave, a cultural export product, it is necessary to get rid of things that seem barbaric in the eyes of the West. The reason why Western animal rights groups do not criticize China for ‘eats everything with four legs except for a chair’ is not because China is afraid, but because it is not yet recognized as an advanced civilization. It was just before the 1988 Seoul Olympics when Bridge Bardot suddenly criticized Korea’s dog meat culture. They criticized it because it was a member of an advanced civilization that hosts the Olympics. If you look at it backwards, it may be a counter-proof that the West began to accept Korea as a member of a civilized country from 1988. 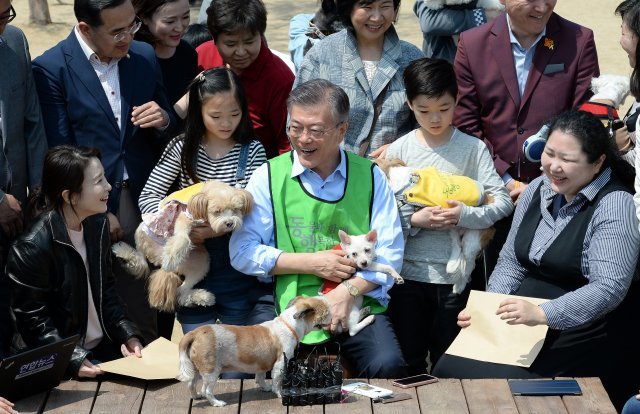 As of last year, it is estimated that there were over 5 million dog households. The dog population will be around 10 million, and there will be 70 to 8 million voters. For this reason, even politicians have to be concerned about voters who have pets. I remember that pets first appeared in the election campaign in the 2017 presidential election. At that time, candidates Moon Jae-in and Ahn Cheol-soo held an event to meet dogs and announced their commitment to companion animal policy. Among the presidential candidates this time, candidate Yoon Seok-yeol became a hot topic when he published photos taken with the puppies he was raising on social media.

It is known that President Moon received a report on how to improve the management system for abandoned companion animals at a weekly meeting with Prime Minister Kim Bu-gyeom on the 27th and said, “Isn’t it time to carefully consider the ban on eating dogs?” I wondered why he suddenly said that. As for my ‘brain-fiction’, when President Moon participated in the G7 summit as the leader of the host country, someone from a foreign country asked, “Does Korea still eat dogs?” Let’s make a guess.