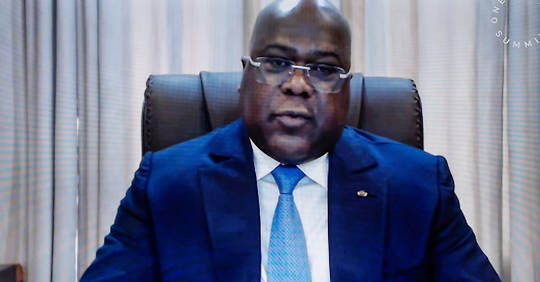 DDisavowed by the Assembly, the Prime Minister of the Democratic Republic of the Congo, Sylvestre Ilunga Ilunkamba, on Friday, January 29, submitted his resignation to President Félix Tshisekedi, who now has a free hand to appoint his own head of government supported by his new parliamentary majority. Unimaginable two years ago. The coming to power of Felix Tshisekedi was far from unanimous, nor the conditions of his election, especially since his governance was expected to be very difficult. But, in the space of two months, the current head of state, more than ever supported by the Americans and the European Union, finally succeeded in isolating his all-powerful predecessor, Joseph Kabila, who thus hoped to return in business in the next election in 2023.

Used to political violence since independence in 1960, the DRC is experiencing a peaceful and constitutional revolution, which the Congolese follow with passion, going about their daily lives normally.

On the way to the sacred union

The president must now apply the promises he made to some 85 million Congolese by announcing the end of his coalition with Joseph Kabila on December 6: fight against corruption and misery which affects two thirds of the population, bring back the peace in the east of the country, bloodied by the violence of armed groups. The Prime Minister, 73, “declared to have drawn the consequences of the evolution of the current political situation”, indicated the presidency on his Twitter account.

The situation is now more than favorable to the former opponent Félix Tshisekedi, a civilian who lived between the Congo and Belgium, facing his predecessor, Joseph Kabila, a soldier by training. At 57, he can now govern alone, without the constraints of the coalition agreement he concluded with ex-President Kabila and his parliamentary majority just before his inauguration on January 24, 2019.

The son of the historic opponent Étienne Tshisekedi will start by appointing the Prime Minister and the government of his choice. To do this, he has a large majority of 391 deputies out of 500 in the National Assembly, according to the score of the official (an “informant” in Congolese law) that he had appointed to identify his own “ majority of sacred union of the nation ”. Waving a threat of dissolution, the president rallied to his cause 24 political “groups”, some of which yesterday were affiliated to the Common Front for the Congo (FCC), the political war machine that Joseph Kabila had set up to leave power. without losing its political influence. In this country where politics and business are common cause, FCC deputies have given in to the lure of profit, persistent rumors report. Félix Tshisekedi also rallied to his cause two powerful opponents, the wealthy Katangese businessman Moïse Katumbi, from the east, and the former warlord Jean-Pierre Bemba, popular in Kinshasa and in the west of the country.

The parliamentary group Mouvement de liberation du Congo (MLC, Mr. Bemba’s party) “has officially joined the sacred union of the nation,” said one of its executives, Mohamed Bule. “Our two leaders, Moïse Katumbi and Jean-Pierre Bemba, have decided to work in synergy,” he added. Félix Tshisekedi will now have to manage the appetites of the two opponents, who will demand positions and responsibilities in the government and in the National Assembly. The test will take place next week, during the election of the new Bureau of the Assembly.

Read also DRC: who, Tshisekedi or Kabila, really holds the reins of power?

Silence on Kabila’s side

The coalition, the pro-Kabila majority in the Assembly, the Prime Minister and his bloated government of 65 ministers, two-thirds of whom were members of the pro-Kabila FCC: “Concrete” Tshisekedi (one of his nicknames) shot dead one by one all the walls that protected Joseph Kabila. Now isolated and withdrawn in his stronghold of Katanga, in Lubumbashi, with a few faithful, Joseph Kabila, 49, still remains silent.

Before launching his offensive, Felix Tshisekedi, who is described as a man of compromise, had ensured the loyalty of the army staff, all of whose high ranking officers had been appointed during Joseph’s reign. Kabila, who had been propelled to the head of the DRC after the assassination, in January 2001, of his father, Laurent-Désiré Kabila. The army has so far respected its republican pact by remaining loyal to its commander-in-chief, the President of the Republic.

Read also DR Congo: why the governance of Félix Tshisekedi promises to be very difficult