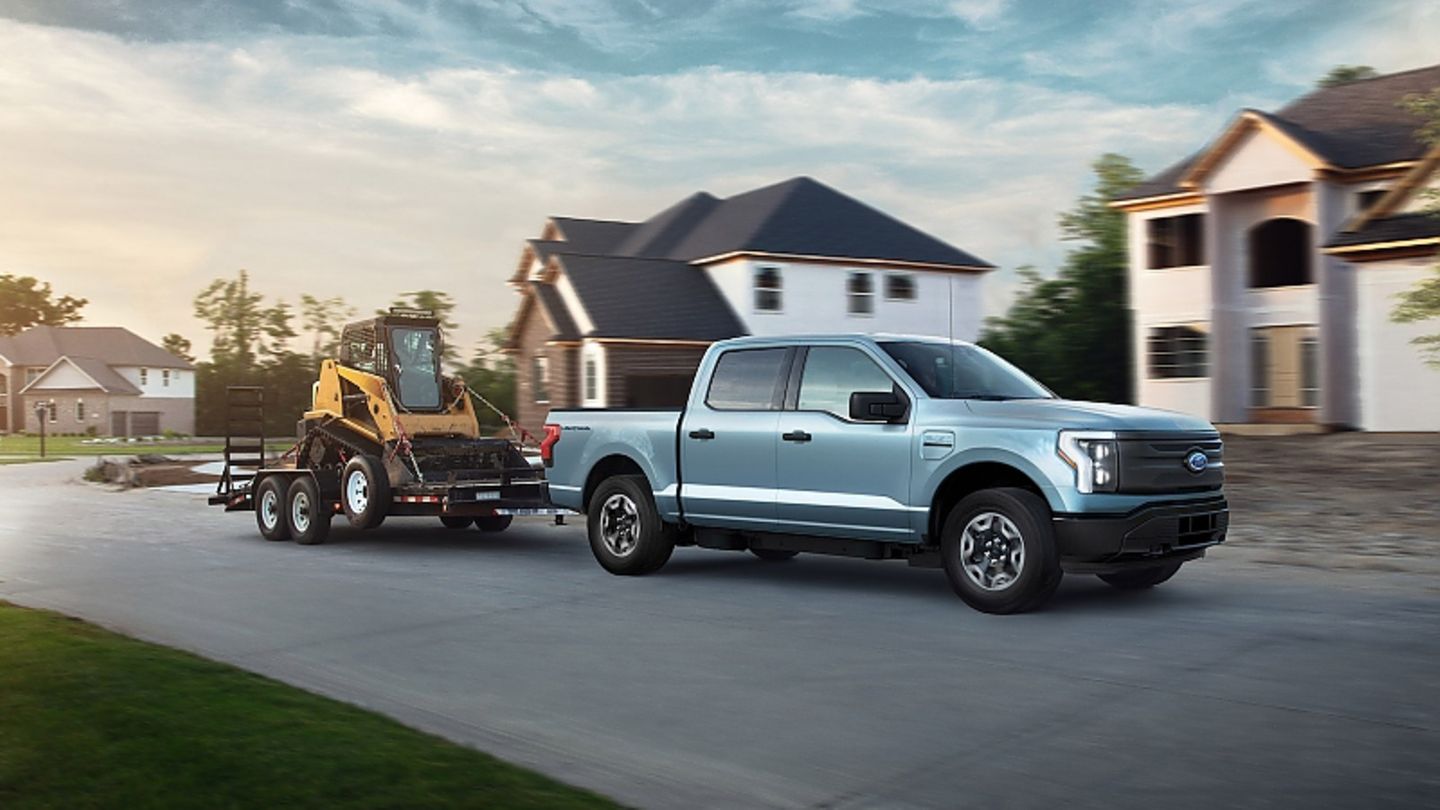 At the beginning of next year, Ford wants to present its F-150 as an electric model under the name Lightning. After Tesla started the electric trend in the US, the electrified F-150 could actually turn the US market upside down. That should also have an impact on Europe.

For more than four decades, Ford’s F-series models, especially the F-150, have been the undisputed bestsellers on the North American car market. At the beginning of 2022, the mass-produced F-150 model in the USA will now also hit the US streets as an electric model and dealers can hardly save themselves from pre-ordering. “Even here in Colorado, the demand is much greater than we would have expected,” said one of the major Ford dealerships in the Denver area, “otherwise the electric cars are more difficult here than in other regions because we have a long and hard drive Have winter with a lot of snow. ” Here you can place your order for an F-150 Lightning for the obligatory 100 US dollars, but many of the Ford dealerships in California are currently no longer accepting pre-orders because they see no chance of a real delivery date. It all sounds a little like Tesla when Elon Musk turned the American car world upside down with his Model S almost ten years ago.

A head start over the Tesla Pick Up

Musk himself is currently not keeping up with the Tesla Pick Up, which has been announced for a long time. It was presented at the end of 2019 and should reach the first customers this year. It won’t do anything with that. Most recently, Elon Musk had to admit that the electric pick-up, with its design based on a set square, was noticeably delayed. Before the end of 2022, hardly any model is likely to be buzzing on the streets and after the numerous delays of the other Tesla models, some fear that it will be 2023 before the electric pick-up rolls in significant numbers to customers, who also sell it for 100 US dollars – Can pre-order dollars. All of this is noted with great satisfaction at the Ford headquarters in Dearborne, the F-150 Lightning is in the starting blocks at the turn of the year 2021/2022 despite the ongoing semiconductor crisis. The Blue Oval already reported more than 130,000 pre-orders at the beginning of September. How quickly production can be ramped up in the face of semiconductor problems is another issue. Mass production is unlikely to take place before 2022 at the earliest and, according to the Ford dealer, many customers will probably not get their F-150 Lightning from the Colorado Auto Mile until 2023.

Car import from the USA

Dream car from America – this is how it works

“Work horse” for tough use

The F-150 has been selling so successfully for four decades, not least because it appeals not only to private customers, but also to business people. It is therefore no surprise that the F-150 Lightning is also offered as a so-called “work horse” under the name Lightning Pro. The base price for the Ford F-150 Lightning Pro with standard battery, electric four-wheel drive, 426 hp and a maximum range of 370 kilometers on one charge is just under 40,000 US dollars. For an additional $ 10,000 there is 563 hp, a range of 480 kilometers and improved equipment.

The electric F-150 Lightning is a power plant for on the go, both for private customers and in the commercial Pro version with external power plugs for camping or crafts. In the basic version, the power plugs offer 2.3 kilowatts, and in the top models Lariat and Platinum 9.6 kilowatts for the supply of tools, cooling units or the caravan. It is important to Ford that the rustic pick-up retains its well-known robustness and off-road mobility despite its electric drive, which has made it so popular with customers all over the world and especially in the USA for decades. As with the normal F-150, there is an aluminum body and independent wheel suspension as well as the four driving programs normal, sport, off-road and towing mode, with the special underrun protection securing the powerful battery pack.

Most of the pre-orders were received across states for the normal F-150 Lightning versions, which also start at 426 hp. However, many customers are currently interested in the more powerful 563 hp variant with 1,050 Nm torque, which can cover up to 500 kilometers without reloading. In order for this tremendous performance to get underground, the Ford F-150 is required to be on the road with an all-wheel drive and can pull trailers weighing more than 4.5 tons. Well-stocked consumer models cost less than $ 53,000 as the F-150 XLT. In addition to the large loading area, the electric Ford F-150 has for the first time under the front hood a loading space of 400 liters for luggage because there is no combustion engine. At the home charging station, the F-150 charges for almost 50 kilometers in one hour; A full battery charge takes up to eight hours at home to fully refuel. It is significantly faster at a 150 kW fast charging station, at which the US pick-up can be strengthened for almost 100 kilometers in ten minutes or reaches up to 80 percent of its battery level in 40 minutes.

“Ford is on an ambitious path to leading the electrification revolution – from being the only American automaker to side with California to tighten greenhouse gas emissions to electrifying our most iconic and popular vehicles, like the F- 150 Lightning, the Mustang Mach-E and the E-Transit, “says Ford CEO Jim Farley,” Customer demand has exceeded our expectations. We therefore assume that we are well positioned to receive 40 to 50 percent of ours by 2030 US sales to focus on all-electric vehicles. “