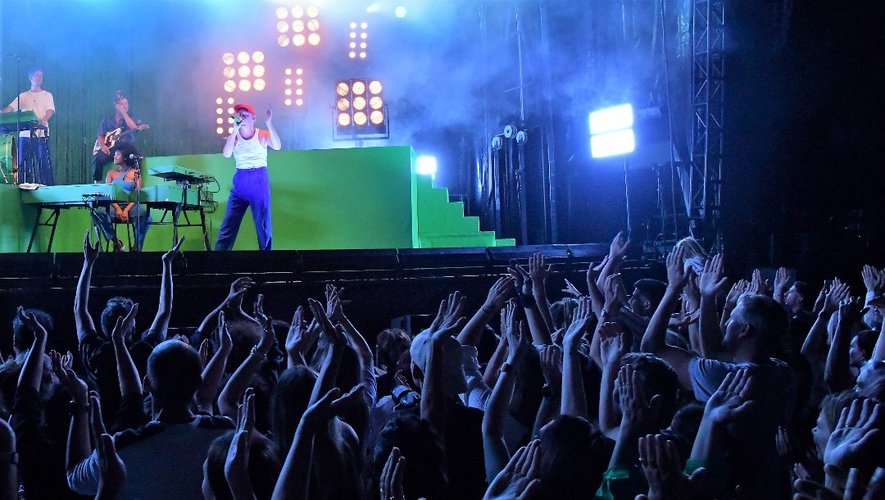 Eddy de Pretto was on the bill for the concert event of the summer, this Thursday evening on Place Capdevielle in Lourdes. The artist provided a total show to the delight of his fans.

It was around 9:40 p.m. on Thursday evening when, guided by dazzling luminous halos, the first notes of guitar and piano sounded on Place Capdevielle. Accompanied by his four musicians, Eddy de Pretto, looking as creative as ever with his red cap, blue pants and white tank top, appeared on stage. He opens the ball with the title “Freaks”, one of the flagship singles of his second and last album “To all the bastards”, released in September 2021. “To all the weird, the strange, the bastards… To all the monsters, those who disturb, those who are put aside”. At the rhythm of the song’s pre-chorus, we immediately see the social struggle in which the Ile-de-France artist is involved. Eddy de Pretto is one of a kind. Propelled to the front of the stage in 2017 with the phenomenon “Kid”, the one who, for years, made his bubbling “groove” resonate in the small Parisian scenes and in the river boats, arrived in the professional environment with the ambition to break codes. What he calls “male toxicity”, already. A frail, ginger-haired young man, Eddy de Pretto seeks to stem what society has always wanted to impose on men. Muscles, strength, superiority, machismo, football… In short, virility. If he launched into music to heal his youthful wounds, the 29-year-old artist also seeks to bring a message full of hope to those who, like him, have sometimes felt sidelined. And it is a dialogue that brings people together.

“Lourdes I will come back… to confess!”

This Thursday, all generations had mixed to dance over the different songs played by the artist-performer: “Freaks” and “Kid”, but also “À quoi bon”, “Désolé Caroline”, “La Fronde” , “Random” and “Flying Boats”. If the place was not completely full, the singer’s fans, who came from all over the department, were inflamed by his performance: “I love the way he moves on stage, he has this energy that makes you overflow with joy, judge Marine, who came specially from Tarbes. He delivers a real moral to all of us in his words, and that changes from many artists who are headlining today.” Eddy de Pretto is committed, whatever the cost. And is sometimes confronted with a certain animosity: in March, the native of Créteil was the victim of a wave of cyber-harassment. Death threats and homophobic insults had led to seventeen arrests. In Lourdes, fortunately, the atmosphere was good-natured, the thousand spectators (and the few curious on the surrounding balconies) being in total communion with the UFO of French song. “Lourdes, I love you! I will come back… And no doubt I will confess,” concluded Eddy de Pretto with humor. This is a very successful evening in the Marian city.

the gameplay presented in detail in a 4K video

De Ligt’s revelations about his difficult time in Turin