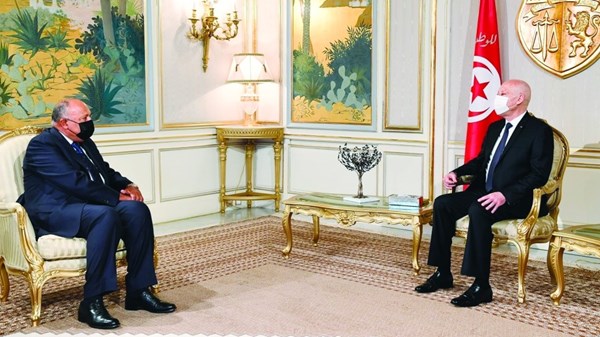 Yesterday, Tunisian President Kais Saied received Egyptian Foreign Minister Sameh Shoukry, who conveyed to him an oral message from Egyptian President Abdel Fattah El-Sisi supporting the measures taken by Said, according to a statement by the Tunisian presidency.
The presidency said, “Shoukry conveyed to the Tunisian president absolute support for the historic measures taken by the president of the republic to achieve the will of the people and ensure Tunisia’s stability.”
The statement quoted the Egyptian Foreign Minister as saying that “his country trusts Saeed’s ability to lead the right constitutional path at a steady pace.”
For his part, the Tunisian president affirmed his keenness to continue strengthening the existing coordination and cooperation relations between the two countries, stressing that Egypt’s security and stability is part of Tunisia’s security and stability. The statement also stated that Saeed reiterated his thanks to Egypt for standing by Tunisia in the face of the Corona virus pandemic.
In a previous statement by the Egyptian Foreign Ministry yesterday, Egypt called for the need to avoid escalation and refrain from violence against state institutions in Tunisia in a way that preserves the interests, security and capabilities of the Tunisian people.
Ambassador Ahmed Hafez, the official spokesman for the ministry, stated that Egypt is following with interest the developments of events in Tunisia, and expresses its full solidarity with the Tunisian people and their legitimate aspirations, and trusts the wisdom and ability of the Tunisian presidency to cross the country from this crisis.