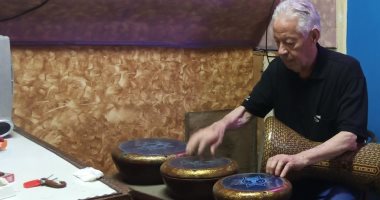 A large number of percussionists (tabla or darbuka) became famous for their great professionalism in playing and playing this instrument that no musical group abandoned. Among these, Hanoun Al-Arabi, the first to play three drums at the same time, and contemporary of the generation of fine art Ahmed Adawiya, Muhammad Rushdi and Samir Al-Iskandarani Hani Mhenni and Samir Sorour.

The 83-year-old Arab artist, affectionate percussionist, said that he has been working as a drummer for 63 years, and has been a drummer for 36 years in the Bahri district of Al-Gamrok district in Alexandria, where celebrations and weddings were always organized and the meeting place for art people of singing and acting.

Al-Arabi Hanoun added, in exclusive statements to “The Seventh Day”, that his professionalism in the drum since his inception in that field of 63 years with senior artists of the beautiful generation in art, and became the first drummer in Egypt to play 3 drums at one time, and continued his love Her until he became a teacher to many percussion artists who later worked with a large number of artists.

Al-Arabi Hanoun indicated that he worked with a whole generation of artists, including “Ahmed Adawiya, Najwa Fouad, Samir al-Iskandarani, Karem Mahmoud, Muhammad Rushdi, Fifi Abdo, Samir Sabry, Muharram Fouad”, and also musicians and composers Hassan Abu Al-Saud, Hani Mhenni and Majdi Al-Husseini. Samir Sorour, Fayed Muhammad Fayed, and Artist Saeed, explaining that he traveled with them to a number of countries such as London, Lebanon, Syria and Sudan to perform concerts in those countries.

Al-Arabi Hanoun talked about the movie Sabaho Kadab starring the artist Ahmed Adam when he mentioned in the movie, “Ruh, O Ananana, bring the music equipment for the band from Al-Arabi Hanoun.” This caused the tax officials to come to him demanding taxes, and confirmed that the artist Ahmed Adam has had a strong relationship with him for years. long.

And Muhammad Al-Arabi, Hanoun’s son, explained that he worked from his father, Al-Tabla, and worked with him with a number of artists whose father participated in their concerts, until he was also able to work with the new generation, such as Hakim, Tamer Ashour, Mustafa Kamel, Rola Saad, the Wama team, and Miriam Fares, because my father was all artists come him in Alexandria.