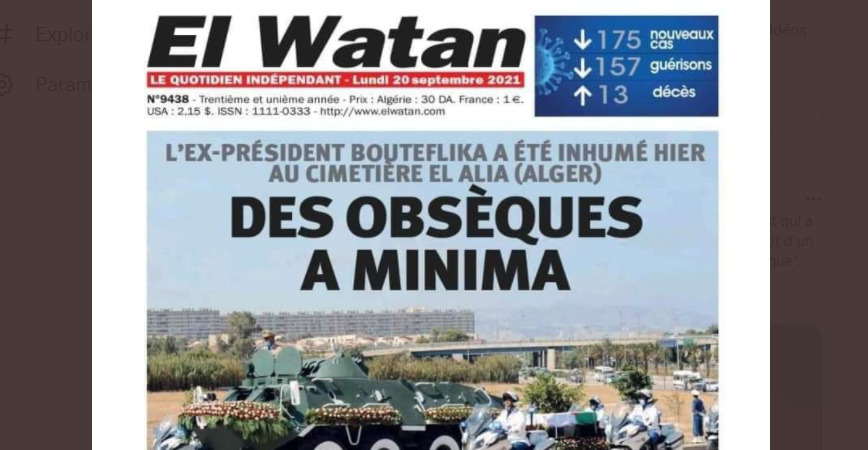 A French-speaking Algerian daily found itself under fire on Monday for having published a retouched photo obscuring the minaret of the Great Mosque of Algiers.

The photo, published by the newspaper El Watan, showed the passage of the funeral convoy of former president Abdelaziz Bouteflika, buried on Sunday, but the imposing minaret of the Great Mosque of Algiers in the background had been removed, sparking lively criticisms of outraged Internet users on social networks.

Faced with this outcry, the French-language daily apologized on its site, citing an “unfortunate technical treatment at the level of the DTP (computer-assisted publication) service of the newspaper”.

He assured that it was “a purely technical incident (which) has nothing to do with any ideological calculation how the circles tried to distill it known for their hostility to El Watan”.

The Ministry of Communication denounced “strange and unjustified behavior” and a “flagrant violation of the laws” governing the Great Mosque of Algiers, condemning “firmly and clearly” the removal of the minaret.

The Ministry of Religious Affairs, for its part, estimated in a statement that the publication of this photo constituted “a violation which should give rise to administrative measures and legal proceedings”.

The president of the Mouvement de la société pour la paix (MSP), the main Islamist party in Algeria, Abderrezak Makri, for his part denounced on his Facebook page a “hatred towards the symbols of the Muslim religion”.

The minaret of the Great Mosque of Algiers is the tallest in the world. It overlooks the bay of Algiers and rises to 267 meters, or 43 floors served by panoramic elevators.

Iconic mega-project of Bouteflika, ousted from power in 2019, the Great Mosque has aroused a lively controversy in Algeria due in particular to its cost (more than 750 million euros), considered exorbitant.