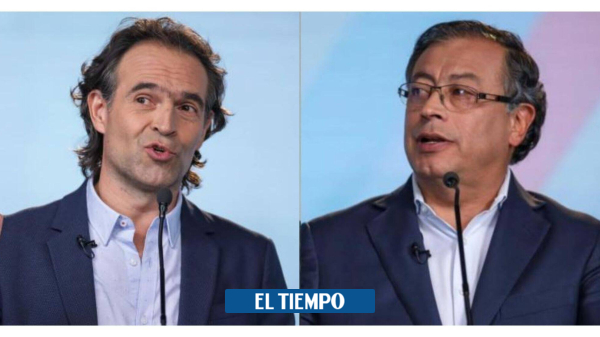 less than two weeks to the presidential first roundthe undecided began to gain a key role in the electoral preferences of citizens.

This was evidenced by a voting intention survey carried out by the firm T&SE Technology & Electoral Services, which collected data between April 23 and May 8 in different parts of the country.

(In other news: Fico says that ‘it will open the door to dialogue with the ELN’)

One of the singularities of the sample was that it was carried out on 8,000 people, which gave a margin of error “less” than 2.7 percent and a “confidence level” of 97.3 percent, according to the file. measurement technique.

According to the figures, the candidate of the Historical Pact, Gustavo Petro, obtains 36.64 percent of the intention to vote. after him is Federico Gutiérrez, Team for Colombia, with 21.40 percent. If this result occurs in the first round, which will take place on May 29, these two presidential candidates would be in a second vote.

After them come the undecided, who scored, according to the survey, 14.39 percent and ranked third in the presidential vote intention.

Behind the undecided are the remaining five presidential candidates

The presence of this group of undecided in third place in the survey shows that there is a percentage of citizens -14.39 percent- who have not decided their vote in the competition for the head of state, which could have different explanations.

For Alfonso Portelaa partner in the company T&SE Tecnología & Servicios Electorales and an expert in public opinion issues, the undecided “play an important role” in an election and it can be said that “many of them are the ones who play the ‘winning horse’”.

Portela stated that “the same campaigns have taken care” that there is a high number of citizens who have not yet opted for any presidential candidate.

“Many people see that in this electoral process some campaigns were dedicated more to the garroteras and not to the proposals and people are saturated with this. There comes a time when it is said ‘there is no one to vote for’ or ‘let’s wait and see what happens to decide’”, said the expert.

Many people see that in this electoral process some campaigns were dedicated more to the garroteras and not to the proposals and people are saturated with this.

And he added that this situation is not focused on a single place in the country, but rather that in several departments and cities there is a strong presence of citizens who have not yet decided which is the candidate of their choice.

Precisely one of the places where the presence of undecideds is higher is Bogotá, where they rank second in the order of the survey. In the capital of the country, Petro obtains 37.82 percent of the voting intention and later this strip is found with 18.49 percent. Later is Fico with 15.62 percent.

And the same situation occurs in Cauca, where the undecided are second with 18.76 percent in the measurement.

The high number of undecideds can also be an opportunity to some presidential campaigns that they would still have a margin to grow in the current competition for the head of state and stay with part of that 14.39 percent of citizens who still do not know who their candidate will be to occupy the House of Nariño.

(Do not miss: Fajardo once again rejects the invitation from the Ministry of the Interior to the Electoral Commission)

Libya: fighting after the announcement of the parallel government of its entry into Tripoli