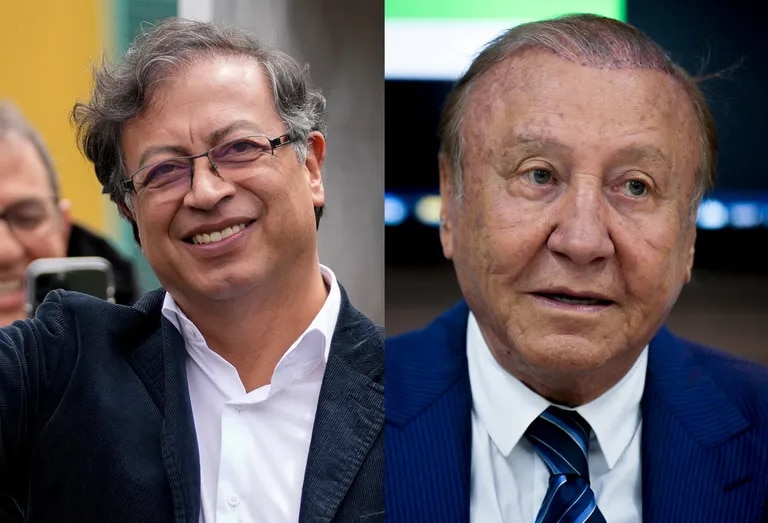 A man who had been a table authority was assassinated and an Army officer was injured in an attack in Vista Hermosa, Meta, mwhile transporting electoral material after the polls closedreported Defense Minister Diego Molano Aponte.

According to the minister, the attack was perpetrated by FARC dissidents.

Hope Center candidate, Sergio Fajardospoke after the electoral results in the first round of Colombia after adding barely 4.20% of the votes, a result for which “we don’t have to be sad,” he said.

Fajardo expressed that both Gustavo Petro and Rodolfo Hernández “have a very great responsibility in this unique event in our history” on June 19, in which they will compete for the presidency of Colombia, a country that he considered “sad and suffering.”

Through a live transmission from his home, the candidate Rodolfo Hernandez, former mayor of Bucaramanga, celebrated his second place in the first electoral round this Sunday that it catapulted him to the ballottage on June 19 against Gustavo Petro for the presidency of Colombia. He stated this afternoon that “We are already in the second half; today lost corruption.

“Today won the country that does not want to continue one more day with the same men and women that have led us to the painful situation we are in today. Today a firm citizen will won to end corruption as a system of government. Today the country lost to politicking and corruption”, Hernandez launched.

“My commitment today is always to make Colombia a country with opportunities,” said the 77-year-old engineer, who accumulated 28.19% of the votes. “Thank you Colombian men and women, I am counting on you to win in the second round and thus complete this great path that we have begun today.”

Hernández highlighted his intention to “unite Colombia”, which was quickly interpreted as a decision to go out and seek the votes of those who followed him, especially those of the right-wing candidate Federico “Fico” Gutiérrez.

With 96.19% of the polling stations counted, the left-wing candidate Gustavo Petro is the winner of this first electoral round with 40.34% of the votes and will face Rodolfo Hernández, who accumulates 28.08%, in the second electoral round for the presidency of Colombia.

While the third place is occupied by the rightist Federico “Fico” Gutiérrez with 23.93%. Behind was Sergio Fajardo, from the Esperanza Center, with 4.22% of the votes, John Milton Rodríguez (1.29%), and Enrique Gómez Martínez (0.23%).

According to the results obtained by the National Registry of Civil Status of Colombia, the elections of Colombians residing in Argentina marked the leftist Gustavo Petro as the winner.

The candidate of the Historical Pact obtained the 63,62% of the votes. Federico “Fico” Gutiérrez remained in second place with 15.88% while outsider Rodolfo Hernández ranked third with 12.16%. The same thing happened in Brazil, Chile and Uruguay.

With 67.48% of the tables counted, the formula of the coalition of the Historical Pact, Gustavo Petro and Francia Márquez Mina are in the lead with 40.65% of the votes.

Second is found Rodolfo Hernandezwith 28.09% of the votes, which widens the distance with the rightist Federico “Fico” Gutierrrez, which currently accumulates 23.87%.

The scrutiny of the elections in Colombia reached 25.89% of the count and the leftist Gustavo Petro continues in the lead with 41.04%. Now, the second place wins it Rodolfo Hernandezthe candidate of the League of Anticorruption Governors, who advances with 28.56%, and surpasses the right-wing candidate Federico “Fico” Gutierrezwhich at the moment obtains 23.25%.

The latest polls catapulted Hernández to the top to dispute a possible second place with Fico Gutiérrez, which reinforced the uncertainty in these historic elections that could displace the right from power after more than two decades in the Colombian government.

With the 5.10% of the polled tablesthe first results of the elections in Colombia They mark Gustavo Petro at the head of the presidential elections.

The leftist candidate of the Historical Pact coalition maintains the lead with a 41,15% of the votes, followed by the right-wing coalition team for Colombia, Federico “Fico” Gutiérrez, with 28.86% of the votes. Rodolfo Hernandez and its Anti-Corruption Governors League ranks third, with a 22,28% of the votes.

Colombia’s electoral authorities closed and The preliminary vote count begins in a presidential election marked by polarization and growing discontent over inflation and inequality.

The Registry will announce the preliminary results of the election with constant updates from 17 (19 in Argentina) and conclusive numbers are expected around 20 (22 in Argentina).

The final results of the scrutiny -in which they verify the voting and give them legal validity- will be declared days later.

In regions of the country impacted by floods caused by the rains, the police helped transport voters in boats to polling stations that were installed on makeshift wooden platforms.

The Colombian Police released images of the elections in Sucre, where it can be seen how the water produced by the floods exceeds the ankles of the police officers, who help people to access the platforms to cast their vote.

The Minister of the Interior, Daniel Palaces, He said that election day took place without significant disturbances of public order and that no polling station had to move for that reason. However, he indicated that through the Immediate Reception Unit for Electoral Transparency (Uriel) they have received 584 complaints of possible electoral irregularities or electoral crimes.

Of these complaints, added the minister, 98 were for constraint on the voter, 81 for intervention in the politics of public servants, 50 for the surveillance of the electoral process, and 49 for corruption of the voter. All the complaints have already been brought to the attention of the Prosecutor’s Office, the Attorney General’s Office and other authorities for the corresponding actions.

The last commander of the dissolved FARC and current leader of the Comunes party, Rodrigo Londoño, alias Timochenko, called today to vote for the leftist candidate Gustavo Petro in the presidential elections in Colombia.

“I invite you to vote for Gustavo Petro and (his running mate) Francia Márquez”, The president of Comunes wrote on his Twitter account, after writing: “I have exercised my right to vote and I have done it so that Colombia has a government of peace, justice and well-being for the majority.”

“We are representing the will for change (…) I trust that this desire for change is the majority”, he expressed Petro after voting in a popular neighborhood of Bogotá accompanied by his wife, Verónica Alcocer García, his daughters and his granddaughter.

For its part, “Fico” Gutierrez He voted at a school in the northern city of Medellin, where he attended with his wife and one of his children and was greeted by supporters who hugged him and took selfies with him. “I invite all Colombians to vote in conscience and for democracy”, he declared to the press after casting his vote at the school, where he graduated 60 years ago as a high school graduate, local media reported.

The electoral day began at 8 in the morning (10 Argentine time) and around 39 million Colombians are voluntarily called to the polls until 16 (18 in Argentina). It is expected that the first results will be known at 5:00 p.m. and that around 8:00 p.m. -or before- it will be known with certainty who the winners are.

The results will be published by the National Registry of Civil Status.

Senator and ex-guerrilla Gustavo Petro, 62, dominates the voting intention, but everything indicates that he will not have enough margin to avoid the ballot on June 19. With him, the left is expected to achieve its best electoral result in this country historically governed by elites, with the largest cocaine production in the world and rising violence, despite the 2016 peace agreement that disarmed the FARC guerrillas. .

Federico Gutierrez (47) y Rodolfo Hernandez (77), the first candidate for a right-wing coalition and related to the ruling party, the second a outsider millionaire, are emerging as their likely rivals in the second round, according to surveys.

The rain it overshadowed the start of the day in Bogotá and the voters arrived by drops to the posts heavily guarded by the military. Abstention, which is around 50% in this country of 50 million inhabitants, could increase because it is feriade bridge.

To win today, a candidate -in this case, who has the best chance is Petro- must meet the 50% of the votes plus one. If no one succeeds, a second round on June 19 between the two most voted.

With an eventual victory for Petro, Colombia would join countries in the region that recently elected leftist politicians, such as Pedro Castillo, in Peru; Gabriel Boricin Chile, and Xiomara Castro, in Honduras. From Brazil, the now candidate Luiz Inacio Lula da Silva has expressed his public support for Petro, assuring that if both become president they would unite to “build a strong South America.”

A Gallup poll this month showed that 75% of Colombians believe the country is headed in the wrong direction and just 27% support Duque. A Gallup poll last year found that 60% of those interviewed had trouble making ends meet.

Anti-poverty efforts in the country have been pushed back by at least a decade due to the coronavirus pandemic. Official figures showed that 39% of Colombia’s 51.6 million people lived on less than $89 a month last year, a slight improvement from 42.5% in 2020.

Meanwhile, inflation hit its two-decade high last month. The Duque government has said that the 9.2% rate in April is part of a global inflationary phenomenon, but the argument has not quelled discontent over rising food prices.

If you want to take a loan without a guarantor.. we will give you the conditions of the National Bank of Egypt