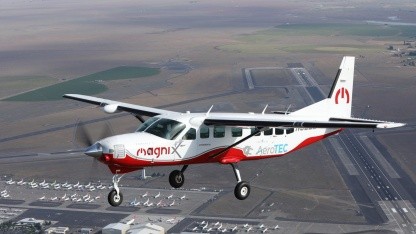 The electric Cessna can fly: The US company MagniX has flown for the first time with a Cessna 208 Grand Caravan that is equipped with an electric drive. The flight to Moses Lake in the US state of Washington was successful.

The Cessna 208 Grand Caravan is a feeder aircraft with a length of almost 13 meters and a wingspan of almost 16 meters. The machine’s propeller, which can accommodate a pilot and 14 travelers, is typically powered by a Pratt & Whitney internal combustion engine. MagniX has replaced it with its Magni500 electric motor.

The aggregate, which weighs around 135 kilograms, has an output of 560 kilowatts. The power supply is provided by lithium-ion batteries, which weigh around one ton. According to MagniX, the electric aircraft will fly with four to five passengers on board. The Cessna is said to cover distances of up to 160 kilometers. There is also a safety reserve.

The loading time should correspond approximately to the flight time. Only fully charged batteries are flown. MagniX plans to have its system certified by the end of next year and then use it commercially.

But not with this machine: The cabin was completely crammed with the battery and the cooling system. There was hardly any space for the passengers. However, no attempt was even made to store the batteries elsewhere, MagniX boss Roei Ganzarski told the US daily Seattle Times. The machine is a flying test bench to show that an aircraft of this size can fly electrically powered. The flight went smoothly.

In front of the Cessna, MagniX has already converted a De Havilland DHC-2 Beaver into an electric aircraft. The Harbor Air Seaplanes plane flew for the first time in December 2019. The Canadian regional airline announced last spring that it would convert its entire aircraft fleet to electric drive.

See Also:  Determined to succeed in its takeover bid for Suez, Veolia refuses to negotiate with Ardian