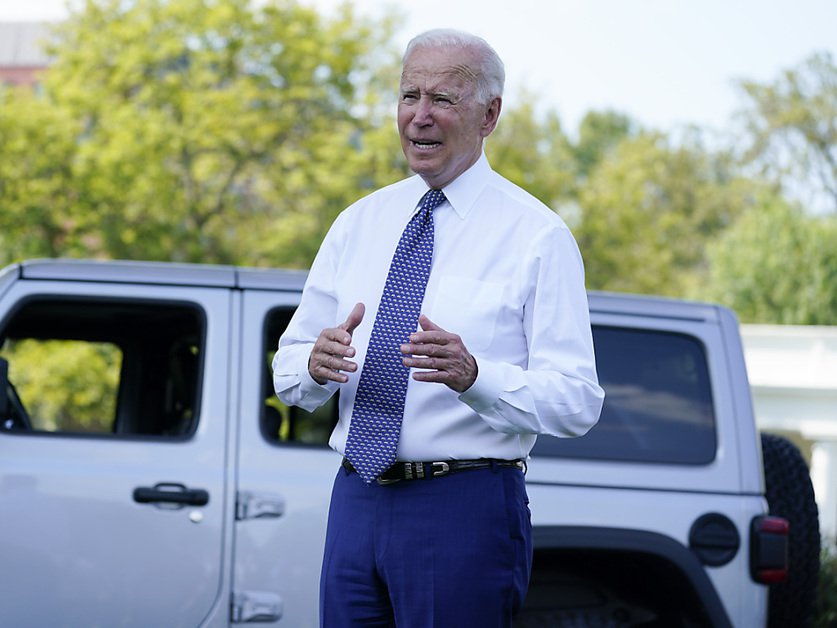 He wants to take the wheel: Joe Biden unveiled on Thursday big ambitions to green the American auto industry, lagging behind aggressive Chinese and European competitors.

The initiative is hailed as an “important signal” by environmental organizations even though some are concerned about how it will be implemented.

The Democratic president, who likes to present himself as “a guy who likes cars”, had lined up at the back of the White House a few models of electric cars. And he got behind the wheel of one of them, a plug-in hybrid Jeep, to do a little circuit.

Joe Biden came shortly before signing, under the sun, a decree setting the goal that by 2030 half of the cars sold in the United States are emission-free, that is to say electric, plug-in hybrids or hydrogen.

The step is high. According to the International Energy Agency, in 2020 electric vehicles represented only 2% of new car sales in the United States – against 10% in Europe.

“The question is whether we are going to take the lead or be relegated to the back,” Joe Biden said in a speech, as “China is leading the race.”

In front of him, the big names of the American automobile. The boss of GM, the boss of Ford, the head of Stellantis – owner of the historic Chrysler brand – in North America, affirmed in a press release their “common ambition to reach 40 to 50%” of vehicles in 2030. this type sold annually in the United States.

But no trace of Elon Musk, boss of the American manufacturer Tesla, perhaps the most famous electric car brand in the world. The whimsical businessman was offended: “Yeah, it seems weird that Tesla was not invited,” he quipped on Twitter.

The manufacturers represented Thursday “are the three main actors of the UAW”, the powerful American automobile union, simply explained Jen Psaki, the spokesperson for the White House. Where Elon Musk is very opposed to any unionization.

In fact, the Democratic president had also put representatives of the UAW in the forefront Thursday. “We will not leave anyone by the side of the road” in this shift towards the electric car, he promised, adding: “When people talk to me about the climate, I mean jobs, jobs”.

The traditional manufacturers like the American motorists were slow to convert, compared to the Chinese or the Europeans. Even late, however, GM, Ford and Stellantis have already focused on electrics in recent months, promising green versions of popular models like Ford’s F150 pickup.

The next step is now to build a solid network of charging stations, the funding of which depends largely on the infrastructure plan under discussion in Parliament, said Jessica Caldwell of the Edmunds cabinet. And “the biggest obstacle” is probably convincing Americans to go electric, she adds.

For the Sierra Club organization, the president’s initiative remains “an important signal”. But a target should be set at 60% of electric vehicles sold by 2030.

Joe Biden also promises to strengthen again the regulations on fuel consumption, largely lightened under Donald Trump. Current emissions regulations require manufacturers to improve the energy performance of their models by 1.5% per year, i.e. the distance traveled with a unit of fuel, between the years 2021 and 2026 – against 5% demanded by the Obama administration. The Biden administration did not immediately unveil a new quantified objective.

For the environmental NGO NRDC, which welcomes the initiative, it is crucial to see the promises quickly transform into concrete and binding standards.

The same mistrust of the Union of Concerned Scientists expert group, which fears that the announcement is “discreetly undermined by loopholes, credits and allowances”.