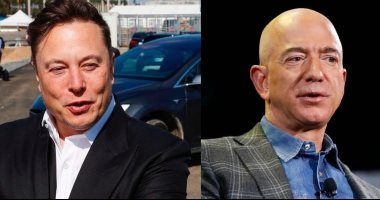 American billionaire, Elon Musk, mocked businessman Jeff Bezos, after the founder of a company expanded SpaceX The difference between his lead over the founder of “Amazon” in the race of the richest person in the world.

And Bezos, the founder of Amazon and Blue Origin, had published on his Twitter account, an article from an old newspaper that mocked the idea of ​​​​creating Amazon, and said that this was just one of the many opinions and stories that tell us all the ways we will fail, asking his followers to listen to all opinions, ” But don’t let anyone tell you who you are.”

He continued, “Amazon is today one of the most successful companies in the world and has revolutionized two completely different industries“.

But Elon Musk responded by placing a medal sign with the number 2 written on it, in a sign of second place, to remind him of his victory in the race for the richest man in the world..

The personal fortune of Tesla founder and SpaceX CEO Elon Musk is now $222 billion, making him the richest person in the world according to Bloomberg. ?

According to the report, Elon Musk’s personal wealth rose by an additional $10.6 billion, after a secondary sale of shares by investors announced last week. billion dollars.

According to the agency, Elon Musk was able to accumulate his enormous wealth thanks to his stake in Tesla and the company SpaceX, of which he is CEO..