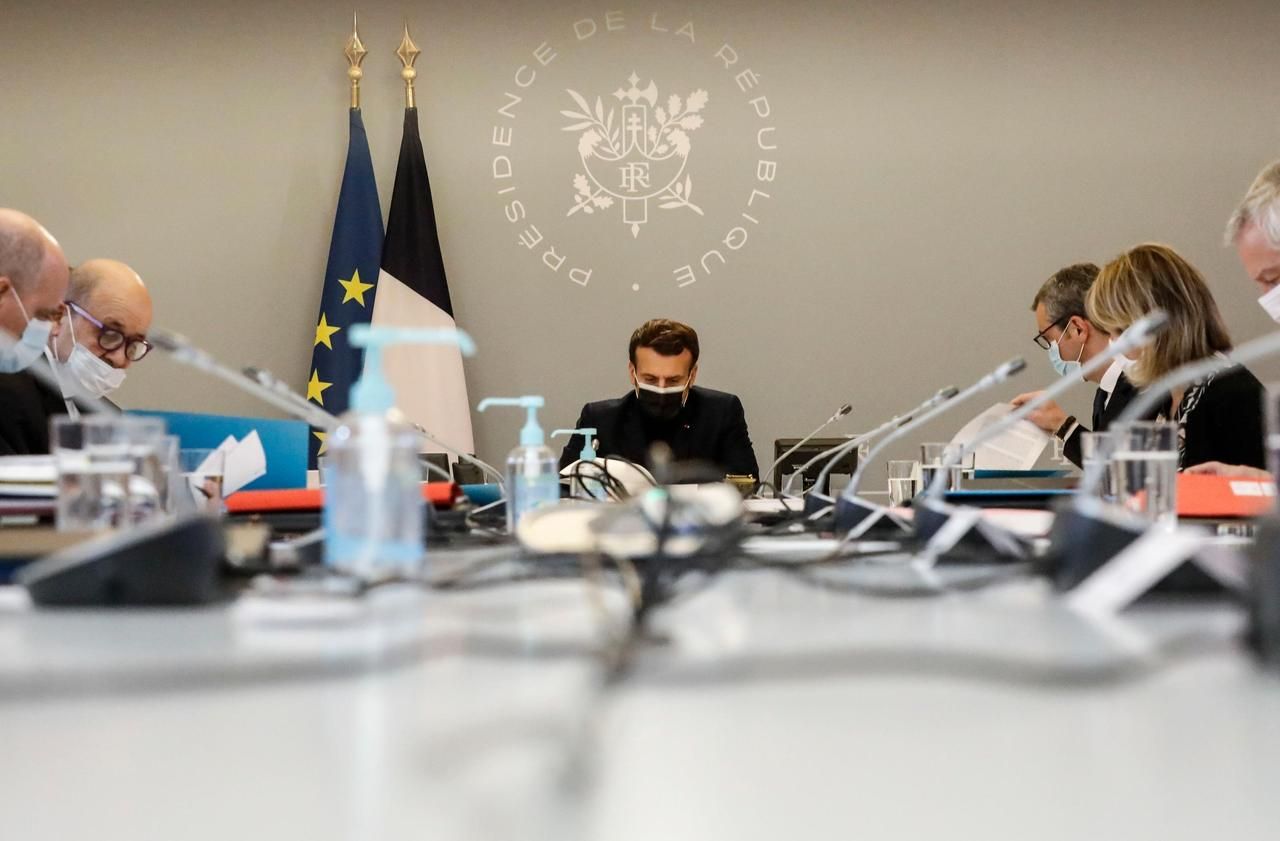 Participants were hastily warned, but the dice are already cast when Emmanuel Macron starts the health defense council. Friday evening at the Murat living room table, the president dressed in a turtleneck sets out his arguments after having left Olivier Véran, then the Director General of Health Jérôme Salomon, present the latest epidemiological data. Around him, Jean Castex, a handful of ministers to whom he briefly gives the floor. The executive faces a dilemma.

“People tell us: We have the ass of your confinements. Do you want to decree a new one as a preventive measure? Without us! But if the epidemic flares up in the coming weeks, the same people will tell us that we are jerks off! “, Sums up one of the stakeholders. Macron decides: “We can still give ourselves a chance” he asks. The idea of ​​closing the country is rejected. The Prime Minister will announce it to the French in the wake of the Elysee. The two men agreed just before, during a one-to-one meeting.

The rumor of an imminent putting under the bell of the country had been buzzing for a few days, however, until the assumption of “a very tight confinement” by the voice of the spokesperson Gabriel Attal on Wednesday. “His decision on Friday is to recall three strong messages: who is Raoul, that he remains the master of the clocks, that it is he who imposes the timing and no one else” sums up one of his friends.

“Never forget that at the end of the day, it’s always the chef who decides. It is impermeable to external pressures. He always wants to surprise, never give in to the obvious. He takes all the blows, but on him the arrows slip, ”engages with a touch of emphasis one of his supporters, for whom the last days mark a change of tone. “The message he sends to the French is clear: I am not abandoning you. Together, we will have tried everything. Politically, it’s super clever. “And Macron even hit the nail on the head this Saturday, with a tweet where he wrote” have confidence in us “and recalled that” the hours we live are crucial “.

I trust us. The hours we live in are crucial. Let’s do everything to curb the epidemic together.

To say that this crisis will have upset Emmanuel Macron’s relationship to power is an understatement. In ten months, he had to review his way of understanding the virus, but also his mode of governance, his relationship to public speaking. Him, this president already scarified by the Benalla affair, the yellow vests crisis, the revolt against the pension reform and many others.

Our analyzes and indiscretions on power

Who could have foreseen such a disaster scenario? Nobody. Not even him. A year ago, on January 24, 2020, as much to say an eternity, the Macron couple went to the Folies Bergères to attend the show of the comedian Alex Lutz. In a corridor, before taking his seat, the president is greeted by his friend, the producer Jean-Marc Dumontet. The two men chat for a few minutes, then the host of the Elysée Palace tells him about information he saw in the newspapers. “It’s weird this thing. There are three sick patients in France, he slips pouting. It’s something to follow… ”

“The eyes were permanently riveted on the morbid figures”

The slap came a few weeks later, on March 25, during a trip to Mulhouse at the bedside of nursing staff. “There, he fully measures the human ravages of the wave that is happening. It happens, there is a military hospital in a parking lot and hundreds and hundreds of dead, ”says a relative. A few days earlier, on March 17, he announced the containment of the country. In a speech weighed with the trebuchet and this famous formula which will make date: “We are at war”. Macron takes it in the face.

At the presidential palace, the atmosphere is not the same either. The walls are emptying. The Head of State discovers the management of power at a distance, digitized by endless videoconferences. “He was isolated. Where a president’s agenda is full and rhythmic, there was only a kind of storm outside and, de facto, like calm weather inside. Our eyes were permanently riveted on the morbid figures, ”recalls a faithful.

PODCAST. Emmanuel Macron and the coronavirus crisis: inside the president’s head (episode 1)

With sometimes funny scenes. As on the occasion of one of the very first health defense councils where bottles of hydroalcoholic gel are placed on the table. Except that the bottles actually contain … soap. The good students of the government, who rushed on it, find themselves sticky hands. Chuckles, even if the period is gravity.

“He pecks and makes the decision later”

In front of his peers, in meetings, the president is often silent. He listens a lot, but speaks little. “He pecks and makes the decision later”, summarizes a framework of the majority. All are especially struck by his repeated annoyances on the famous weight of the technostructure, the State apparatus, not to mention the slowness of the health administration. These pitfalls which have often made the effectiveness of political decision hardly noticeable on the ground. When she hasn’t revealed her inconsistencies. With its share of hiccups and delays in the management of masks, tests, and of course the vaccination campaign.

PODCAST. Emmanuel Macron and the coronavirus crisis: inside the president’s head (episode 2)

Last May 5, for example, for his first trip as a masked president, Macron went to a school in Poissy (Yvelines), to reassure the French. But Karl Olive, the mayor LR with whom he is nevertheless on good terms, welcomes him with a little cold shower: “Mr. President, if I had had to respect your stupid sanitary protocol, that is – say a directory, we would never have to reopen our schools, ”planted the elected official. Answer: “Well I know, you’re right …”

“It annoys him to see things coming and to see that it does not follow behind,” concedes a minister. Like this August 11, while France still wants to believe in “happy days”, the Head of State calls from Brégançon a defense council by videoconference. “We were ordered to go to the sub-prefecture closest to our resort to connect. I had the feeling that the crisis was over. But that day he gave us a big booster shot by pushing a bawl on the tests, ”recalls one participant.

“If we do nothing, if we do not prioritize, we will take a tide in September with hours and hours of waiting. I ask you to put in place prioritization criteria, ”he urges. Three weeks later, at the start of the school year, nothing is ready … and the controversy is racing. Same thing at the end of the year, with this premonitory warning on December 16: “I see coming a very strong risk of delay with Germany on vaccination. Everything must be done to ensure that it is as small as possible, ”he warns in the midst of the defense council. At the beginning of January, the dreaded forecast turns into a prophecy: France has vaccinated only a few hundred people, when they are already several tens of thousands in neighboring countries … From his office at the Elysee, Macron sees red.

Maximum pressure on its teams

So recently, he puts maximum pressure on his teams. Particularly in the Council of Ministers which now begins with a summary of the points on which they had requested answers during the previous days. “Then at the end of the meeting, he makes a list of goals for the next board. History make it clear to everyone. A permanent power-up, ”says a government heavyweight.

As for the criticisms of the opposition, the questions of the scientific community, can annoy it, or almost. “When the first wave arrives, it’s such a shock that scientific knowledge is the only benchmark for him, as for everyone else, explains an intimate. Except that in ten months of crisis, he also acquired his bearings. Taking into account the economic and now psychological impacts for society have now become equally important factors for him ”.

“He does not come out of centrality”

Others criticize him for not having been able to rely sufficiently on the expertise of local elected officials. Like Gérard Larcher, who hoped that in the course of the crises he went through, this so “Jacobin” president would have gradually given way to decentralization, to more extensive cooperation with the “territories”. . In vain. “It does not come out of centrality. I thought he was like Paul on the road to Damascus, a little converted. But it is not ”, laments the President of the Senate, for whom“ the quintessence of centrality is the defense council ”.

There remains the gaze of the French, of this versatile opinion with regard to a power which sails on sight in front of a virus which continues to surprise today. Far from the challenges of the next presidential election, Emmanuel Macron wants for the moment to stay away from the political consequences of the coronavirus, even if the polls predict him to be neck and neck with his main rival, Marine Le Pen.

“He promised us that we would see what we were going to see with his army of scholars and experts, we saw the result. The management of this crisis is a dreadful fiasco, ”scribes the boss of the RN. And this very close to Macron to fear the 450 days that separate them from May 2022: “If we have not managed to get out by then, of course that will weigh heavily. We have seen how this crisis had an impact on the results in the United States. If Trump had managed better, if he had had the vaccine, he surely would have won. “