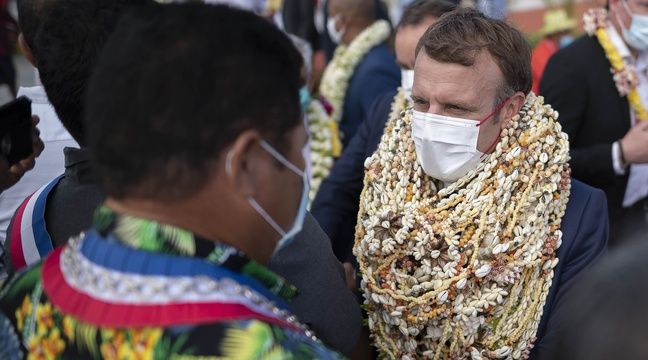 The head of state was expected on the issue. And it is in an informal way that Emmanuel Macron initially chose to talk about nuclear tests in the Pacific. He indeed stopped Monday by the roadside to discuss with activists of the anti-nuclear association 193, committing to transparency on nuclear tests and assuring that he had “heard” them during his visit. in French Polynesia.

“I can’t ask you to trust me after you’ve been lied to for so long by not sharing information, it’s true, and so I think trust is built by saying everything, by sharing the totality, being much more transparent and it is true that we have not done the job so far, ”he declared in front of a group of about fifty demonstrators on the island of Moorea, among which floated independence flags.

“You will excuse me, but we cannot help thinking that you are at the end of your term of office, so words are one thing, but afterwards, concretely? There are urgent demands, people who are suffering. We ask you to assume what the State has done to these Polynesian people, a forgiveness and really a support ”, retorted Léna Lenormand, vice-president of association 193, which refers to the number of tests. French nuclear power plants carried out in Polynesia. “I know that for a very long time there was silence and a refusal to even share information, to take responsibility, to be transparent. (…) I will speak this evening, but I heard you, and I heard what you were asking me, and you will see my answer, ”replied the Head of State.

“I pledge that things will change in terms of compensation procedures because it is true that the 2010 law today leaves people in distress, with procedures that are too long,” continued Emmanuel Macron. On the other hand, national solidarity and the responsibility of the State, “it is not the same thing”, he affirmed.

For the president, “it is normal, and it is a duty of the nation, to support all Polynesians and Polynesians who today are stricken by new forms of cancer. And there must be a supply of care, doctors and researchers, given the dual insularity in which you are ”. “Another thing is to say that all the people who have new forms of cancer, how much even they have nothing to do with the trials, should be taken care of under the trials. It’s not the same thing, ”he said. The Polynesians are therefore now awaiting the official speech on Monday evening.