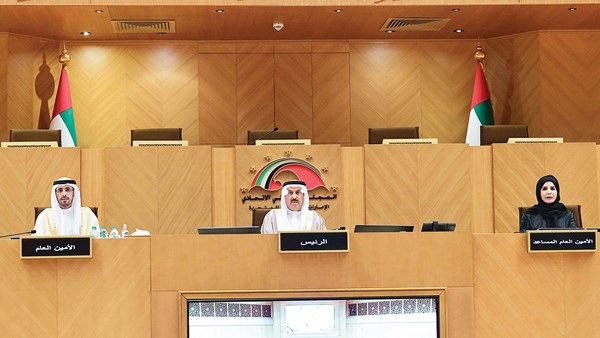 The Ministry of Health and Community Protection confirmed that all examinations for people infected with “Covid-19” and those in contact with them are free, and that examinations are free for all members of society within the facilities affiliated with the ministry, stressing that the government bears the costs of treating people with “Covid 19” in full, whether for citizens or residents. .
The ministry revealed that the federal health insurance system is under implementation during the current period in cooperation with the Ministry of Finance, while work is underway to complete and finalize the health insurance bill in the near future.
It came during the 13th session of the second session of the Federal National Council, which was held by the Council at its headquarters in Abu Dhabi yesterday, headed by His Excellency Saqr Ghobash, Chairman of the Council, and in the presence of His Excellency Abdul Rahman bin Muhammad Al Owais, Minister of Health and Community Protection, in addition to the members of the Council.
During the session, the Council approved a draft federal law on mental health, which includes 61 articles and regulates preventive, curative and rehabilitative mental health, and works to provide the necessary health care for the mentally ill according to the best applicable standards.

Post-Covid-19 era
For his part, His Excellency Abdul Rahman bin Muhammad Al Owais, during his response to a proposal from Naama Al Sharhan, Second Vice-President of the Federal National Council, on establishing mini-clinics in commercial centers to deal with emergency cases, said that commercial centers are not subject to the Ministry’s competences, while the Ministry will work to deliver The proposal is for the concerned authorities, whether concerned with the economic or regulatory aspect, where work will be studied and discussed with the competent authorities.
His Excellency added: The post-Covid-19 phase differs from the phase before it, as the past period contributed to finding a number of positives, including rearranging priorities and paying attention to a number of services and opportunities available, and the importance of working to develop the work system, benefiting from the outputs of the period. previous.

In response to another question from Hamad Al-Rahoumi, First Vice-President of the Federal National Council, about the role of health insurance companies in covering the expenses of “Covid-19” examinations, His Excellency confirmed that the Ministry had taken an initiative from the beginning not to obtain fees for examinations that take place in the health facilities affiliated with the Ministry. With the exception of only two weeks during which examination fees were collected due to crowding during the initial vaccination phase, the examinations were directed free of charge to various members of society.
He pointed out that the ministry does not interfere in the examinations of other local authorities and the issue of collecting fees in them, explaining that with regard to contacts and people infected with the virus, all examinations for this category are free, and that the government undertakes the expenses of “Covid-19” treatment for those infected with it, whether citizens and residents.

Diversity of health services
On his part, Youssef Al-Sarkal, Director General of the Emirates Foundation for Health Services, explained, during his intervention during the question posed by Ahmed Abdullah Al-Shehhi, a member of the Council, about the development of Shaam Hospital, that all hospitals affiliated with the Emirates Foundation work within an integrated system that guarantees diversity in health services within hospitals according to To classify them, whether they are social, public, reference and specialized establishments.
He said: The Shaam Community Hospital operates within a system that includes 5 major hospitals in the Emirate of Ras Al Khaimah, where there is a development plan for Shaam Hospital within a comprehensive plan of the Emirates Foundation, where the old hospital was replaced in 2018 and the new hospital was opened, in which the number of accident and emergency beds was increased. With a capacity of up to 3 times the previous one, and the number of health services increased to 3 times the previous one, the hospital also obtained international health accreditation from the Joint International Commission, by obtaining 1,200 assessment points.

He added: Shaam Hospital obtained the “ISO”, and its services continued during the “pandemic” period, and the number of visits reached 43,000 during the past year. The percentage of customers’ happiness increased to 83%, and the percentage of observations decreased by 138% between 2018 and 2020, and work continues to develop the hospital’s services to add more medical services, as there is a development plan regarding the inclusion of obstetrics and gynecology services in the hospital and the modernization of the airstrip.

Rare medical specialties
During another intervention in response to the question of Obaid Khalfan Al-Ghoul Al-Salami, a member of the Council, about supporting the owners of rare medical specialties, Al-Sarkal explained that one of the most important priorities of the Ministry of Health and Community Protection and the Emirates Foundation is to employ the citizen medical staff in all medical fields and the sustainability of the health sector, as the number of doctors has been increased. Citizens in various specialties increased by 13% between 2017 and 2020. The ministry also adopted a scholarship program for national doctors inside and outside the country in cooperation with the Ministry of Education, where a group of doctors were sent during the last period.
He pointed out that the Arab Board was established, where the Ministry provided 1,185 seats for postgraduate medical studies within 43 training programs in rare specialties, and the percentage of those enrolled in the board increased by more than 450% during the period from 2017 to 2020, and the establishment of the National Institute for Health Specialties was started. Which aims to develop and raise the professional level of doctors, and to approve training programs based on health needs.
He pointed out that an initiative was developed in cooperation with the Federal Authority for Human Resources regarding incentives for the specialized medical staff, but due to the “pandemic” conditions, the implementation of the initiative was postponed, as the next stage will witness the activation of the re-initiative to study the general incentives for doctors working in health facilities.

Psychological health
The members of the Federal National Council approved the draft mental health law, which aims to regulate the relationship between the psychiatric patient and the various parties that deal with him, protect and preserve the rights and dignity of the psychiatric patient, reduce the negative effects of mental disorders for individuals and the family, in addition to promoting the integration of the psychiatric patient into society, and providing health care. necessary for him.
According to the draft law, mental health services may not be provided without obtaining a license from the health authority, and the mental health facility must maintain a special register for the registration of mental patients, and the executive regulations specify the data that must be included in the register and the duration of its retention, in addition to the formation of a monitoring and review committee. By a decision from the head of the health authority in each emirate in which mental health services are provided, and the decision determines its work system.
According to the draft law, the functions of the Monitoring and Review Committee include following up on reports received from mental health facilities related to cases of compulsory admission, issuing the necessary approvals for the treatment of psychiatric patients who refuse treatment in cases of compulsory treatment at the request of the health facility, and monitoring mental health facilities and ensuring their compliance and employees. It involves applying the standards and procedures stipulated in the law and its executive regulations, reviewing reports received from the Patients’ Rights Care Committee regarding complaints and making recommendations regarding them to the health authority if necessary.

The draft law defines the rights of the psychiatric patient, including receiving a full explanation in a manner that understands all his rights after entering the mental health facility directly, including his right to complain or to his representative in case the psychiatric patient is unable to understand them, and not to impose restrictions on his work or employment due to his psychological disorder Or terminate his work except on the basis of a report from a competent medical committee, and to preserve his privacy and personal belongings in his place of residence in the health facility or others, in addition to receiving visitors or refusing to receive them in accordance with the visitation system in the mental health facility and protecting the confidentiality of his information in accordance with the legislation in force in this matter.
The draft law stipulates the rights associated with health care for the mental patient, including access to psychological treatment and psychiatric medications in accordance with the recognized medical principles, knowledge of the diagnosis that was given to him, receiving full information about the treatment plan and its progress, the extent of response to it and any change in it, the treatment methods and the desired benefits from it. And the risks and possible side effects and possible treatment alternatives before agreeing to the treatment, and informing him of the reasons for his transfer inside or outside the facility.
According to the draft law, the minor psychiatric patient is surrounded by special health guarantees that take into account his age group, psychological condition and best interests, including the right to provide education, oblige the representative of the minor psychiatric patient to follow the treatment plan, and precede any preparation procedure by a social or psychological specialist, and allocate places upon entry. Compulsory and separate them from the premises of adults and provide separate facilities for him.
The draft law clarified that the entry of a psychiatric patient or person to a mental health facility for evaluation or treatment is voluntary, mandatory, emergency, or deposit. It is not permissible to enter compulsory admission to private mental health facilities, and entry to a mental health facility for treatment is voluntary under the written consent of the psychiatric patient. Or his representative, and he may exit from it at his request or his representative, even if he has not completed the treatment.