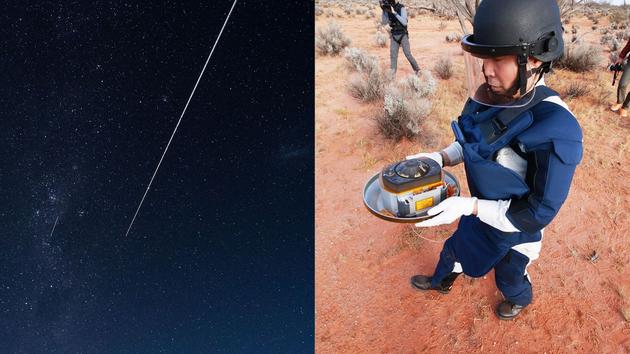 IN PICTURES – The Japanese probe, which passed close to Earth on Saturday, successfully delivered a small cosmic package containing asteroid dust in the Australian desert of Woomera.

In southern Australia, an endless shooting star crossed the sky right through the night from Saturday to Sunday (around 6.30 p.m. French time).

This unusual spectacle is that of the re-entry into the atmosphere of a small capsule dropped a few hours earlier not the Japanese probe Hayabusa-2 crossing near the Earth. Inside the small package, a precious treasure: a pinch of dust collected on the asteroid Ryugu last year.

On board the International Space Station, the Japanese Soichi Noguchi was able to attend the show, unfortunately not bright enough to be photographed from space …

At about 10 km altitude, the small 40 cm diameter package deployed its parachute to land smoothly in the Woomera desert. It emitted small radio beeps which were immediately spotted by the antennas of the recovery teams, on site for several weeks. They went to the exact site by helicopter to pick up their cosmic delivery in the early morning.

“After six years of space travel, we were able to bring back a treasure box this morning,” project manager Yuichi Tsuda told a press conference after the operations. This will only be opened in facilities provided for this purpose in Japan. Researchers do not yet know how much grain was harvested. The goal was to bring back at least 100 mg (a tenth of a gram) but they hope to have captured a little more (maybe several grams). The mission having cost more than 200 million euros, this makes it probably the most valuable material in the world!

They were picked up in 2019 on Ryugu, a sort of tetrahedral mountain 900m high, blacker than carbon, rich in organic molecules (molecules whose spine is made up of carbon atoms). The collection operations there were particularly perilous because of its rugged profile (see below).

Remember that apart from the Moon, scientists have almost no sample of matter taken elsewhere than on Earth. Only a few dust collected from the hair of a comet (by the StarDust mission) and micrometric grains – invisible to the naked eye – from the asteroid Itokawa have come back to us to this day …

With Ryugu, this is the first time that researchers will be able to analyze on Earth material taken from a so-called “primitive” asteroid formed at the beginning of the Solar System. As its size is relatively small, gravity and pressure did not play a large geological role there, unlike bodies like the Moon or the Earth. The researchers thus think of opening a window on the infancy of the Solar system.

The Hayabusa-2 probe has not completed its mission. After having dropped her package, she indeed proceeded to an avoidance maneuver in order to continue her route around the Sun. It will pass near a new target in 2026: a small asteroid that it will only fly over briefly. Its next real target is a super rotator just a few tens of meters, an asteroid circling around in less than 10 minutes. Scientists have no idea what such an object might look like … But that’s another story.