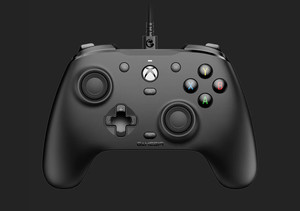 GameSir G7 is an official Xbox licensed product from Microsoft, and can be used in the Xbox One, Xbox Series X|S, and Windows 10 / 11 PC environments. Two interchangeable front plates are provided, allowing users to change between black and white.

The XYAB button has a 5-layer structure and is durable enough to withstand 5 million presses. The internal switch is only 0.6mm away, and the soft rubber pad acts as a shock absorber, so you can press the button quickly and safely in succession.

In addition, the polling rate (the number of times data can be sent per second) is 256Hz and the input delay time is less than 0.004 seconds, making it suitable for pleasantly enjoying games that decide the winner in an instant.

On the front of the GameSir G7, press and hold the M button above the GAMESIR logo and the left and right trigger buttons at the same time to switch to ‘Hair Trigger’ mode. In hair trigger mode, it responds immediately even if you press the trigger button more shallowly than usual, making it easier to press the button continuously. This is a useful feature when playing FPS and action games.

Two back buttons are provided on the rear side, which is convenient because the user can designate the necessary functions without using separate software.

“3 days of big discounts” starts in Dubai on Friday.. Learn about the participating centers