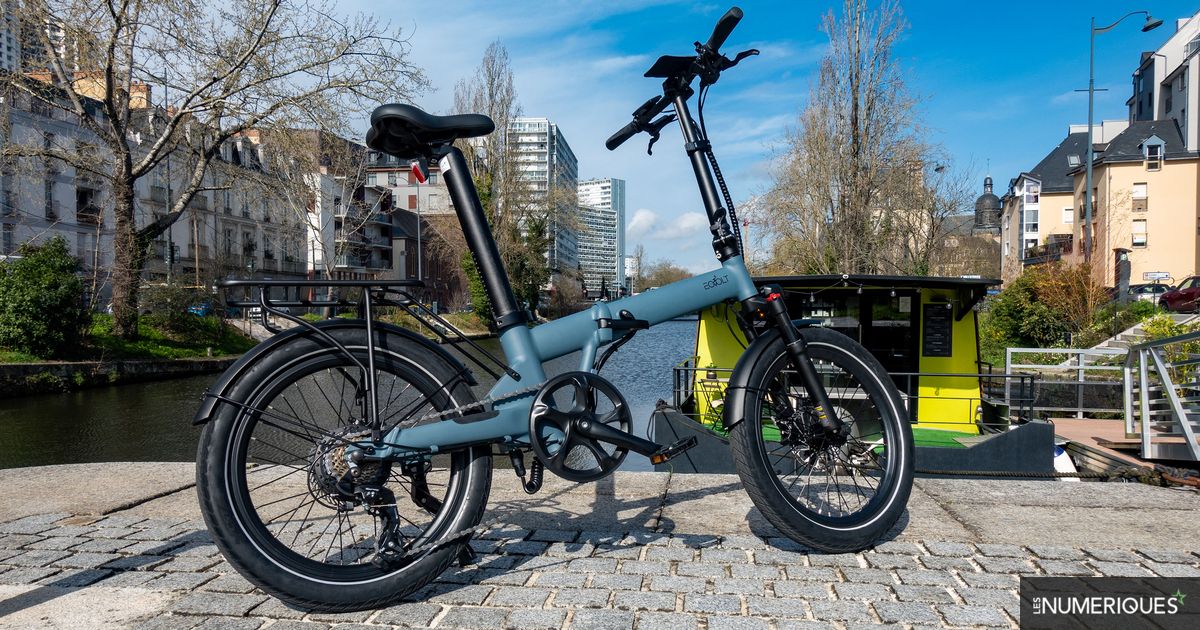 The Eovolt Afternoon falls into the category of fat folding bikes. Always transportable, of course, we will not carry it around everywhere. Indeed, its dimensions of 85 x 73 x 46 cm do not allow it to fit anywhere. It thus occupies a volume greater than that of a large suitcase and therefore takes up space in a trunk or in the luggage spaces of a train, for example.

Although its manufacturer intends it for intermodal use, you have to be aware of its size, not to mention its weight! The Eovolt Afternoon indeed weighs as much as a classic electrically assisted bicycle. With its 23 kg on the scale, we will think twice before carrying it up the stairs.

It can nevertheless be rolled when it is folded, by pushing it by its saddle which you will have previously raised. You should still not hope to travel more than a few meters in this way, it simply avoids lifting it to move it to a cycle path or on public transport, for example.

This certain size is in favor of a pleasant driving position, including for large sizes who will not feel too cramped on their handlebars. The amplitude of the height adjustments of the saddle and the handlebars allow you to find yourself at ease quite easily.

The saddle itself is also quite soft, while our hands are welcomed by ergonomic handles.

Comfort is also felt when driving. With its wide 20-inch wheels with a 2.4″ section that filter vibrations well, the Eovolt Afternoon is not too affected by the irregularities of the road and can even accommodate a few paths. So much so that the ‘we come to wonder if its suspension fork would not be superfluous.

Not very reactive, it only serves to absorb the big shocks that occur when the wheel stumbles on a sidewalk or sinks into a pothole, for example. Although it is adjustable, this fork did not in any case seem to change the situation and unfortunately contributes to making the bike even heavier.

The Afternoon also comes fully equipped, with nicely integrated aluminum fenders. That of the front wheel, however, could have gone down a little more to better protect the shoes from splashes.

No miracle in terms of the lighting system, the front headlight does just what it takes to be seen and drive at night with public lighting, but is too weak to drive serenely outside built-up areas. We also regret that the rear lighting is not connected to the battery. You have to remember to turn it on manually.

When it comes to folding, the Eovolt Afternoon only requires three main operations that take less than a minute. Simply unlock its central handle to fold it in half, the front wheel then snapping onto the rear wheel axle. A second handle at the base of the stem allows it to be folded against the front wheel. All that remains is to lower the seatpost until its base touches the ground, thus ensuring the stability of the bike.

This seatpost can also be removed from the bike, and for good reason, it contains the battery which can be transported more easily to go and recharge it at home or at the office, without having to move the entire bike. Practical, but we still regret that the connection to the bike is made from below, because the connector gets dirty quickly and handling it can be messy.

Although it is not as nimble as a small-wheeled collapsible like the Eovolt Morning or formerly the City, the Eovolt Afternoon nevertheless proves capable of sneaking through the urban jungle without difficulty. Its large size and wide wheels, on the other hand, ensure good stability and we can easily let go of our hands from the handlebars without making it wobble.

Very rolling, it also benefits from a 7-speed Shimano Tourney transmission ensuring a good range of development. The largest gear thus makes it possible to exceed 30 km/h without an infernal pedaling rate, while the smallest relieves enough in the ribs. Compared to a folding single-speed, this flexibility is significant, because the engine is not everything.

Housed in the hub of the rear wheel, the latter is nevertheless powerful enough to propel the Afternoon without necessarily having to press hard on the pedals. The first 3 levels of assistance are sufficient to face most situations, but the last two are not too much to climb the steepest slopes taking advantage of the motor’s maximum torque of 40 Nm.

We appreciate the flexibility of the assistance, despite the absence of a torque sensor which would have made it proportional to the force exerted on the pedals. However, it is enough to limit yourself to the first assistance modes to maintain the feeling of really riding a bike, although it is always possible to move forward by turning the pedals without forcing (with a small gear ratio, for example).

When it’s time to stop, you can rely on Nutt hydraulic brakes with 160 mm discs, providing progressive braking and efficient enough to stop in about 3 m during emergency braking (80 cyclist kg), well helped by the good grip of the wide tires.

Even more delicate than for classic electric bikes, the evaluation of the autonomy of a folding VAE depends a lot on external parameters, in particular the number of stops in the city center and of course the difference in altitude. We nevertheless tested the autonomy of the Afternoon according to our usual method, maximum assistance on a route mainly on the road with an elevation gain of around 500 m. In these conditions, with a load of 82 kg (cyclist equipped plus a lock), we were just able to reach 50 km before the assistance cut off.

In normal use, we should be able to count on at least 60 to 70 km of autonomy if we do not abuse the electric assistance and that we press a little on the pedals to relieve the engine. Eovolt promises for its part up to 100 km of autonomy, in ideal conditions and with a minimum assistance however.

Recharging turns out to be quite long. It takes about 7 hours to recharge the battery with the modest 2 A charger provided.

In which US states is there a death penalty and what crimes are punishable?

The July full moon will be out of the ordinary