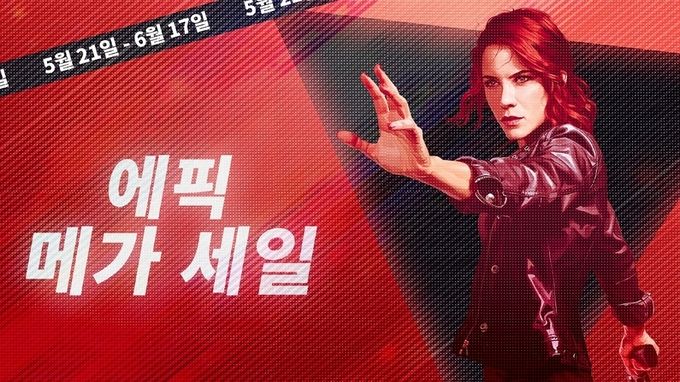 [FETV=김창수 기자] Epic Games Korea, the Korean subsidiary of Epic Games, announced on the 11th that ‘Control’ was selected as a free masterpiece game this week and will be provided free of charge until the 17th.

As part of the Epic Mega Sale, the Epic Games Store is offering a selection of classic games for free every week. As the first protagonist, ‘NBA 2K21’ was provided free of charge, followed by the PC versions ‘Irmon Earth’ and ‘Frostpunk’.

Control, which was selected as the fourth free masterpiece game, is a third-person supernatural action-adventure game by Remedi Entertainment, famous for its Max Payne series and ‘Alan Wake’.

It follows new director Jesse Faden’s quest to regain control after a New York secret agency is invaded by a different world. Fight in a profound and unpredictable world, taking control of superpowers, transformable weapons, and responsive environments.

Users can receive the main game of Control for free, and can purchase two expansion packs ‘Foundation’ and ‘AWE’ at a 50% discount on new story content, side missions, as well as new weapons and mods.

In addition to the basic discount, you can use unlimited Epic gift certificates that can be used for games with a discount price of 1 min and 5,000 won or more to receive an additional discount of 11,000 won. You can also get the Fortnite ‘Street Shadow Challenge Pack’ for free.

Meanwhile, in the general app category of the store, Discord, a messenger service that allows you to talk comfortably with the community or friends through voice, chat, and video calls, has been newly launched. To commemorate this launch, if you download Discord from the Epic Games store, you will receive a 3-month subscription to Discord Nitro, a premium service that provides privileges such as emoticon upgrades and large file uploads. The voucher code will be sent to the email registered in your Epic Games account.

Park Seong-cheol, CEO of Epic Games Korea, said, “With ‘Control’, which has been well-received by critics and gamers alike, this Epic Mega Sale free-of-charge masterpiece game series has come to a close.” We hope that you can download it for free and enjoy various games that you have never played before by purchasing them at a discounted price through the Epic Mega Sale for a week. Also, please pay a lot of attention to Discord, where you can get a 3-month free subscription to the premium service Nitro.”