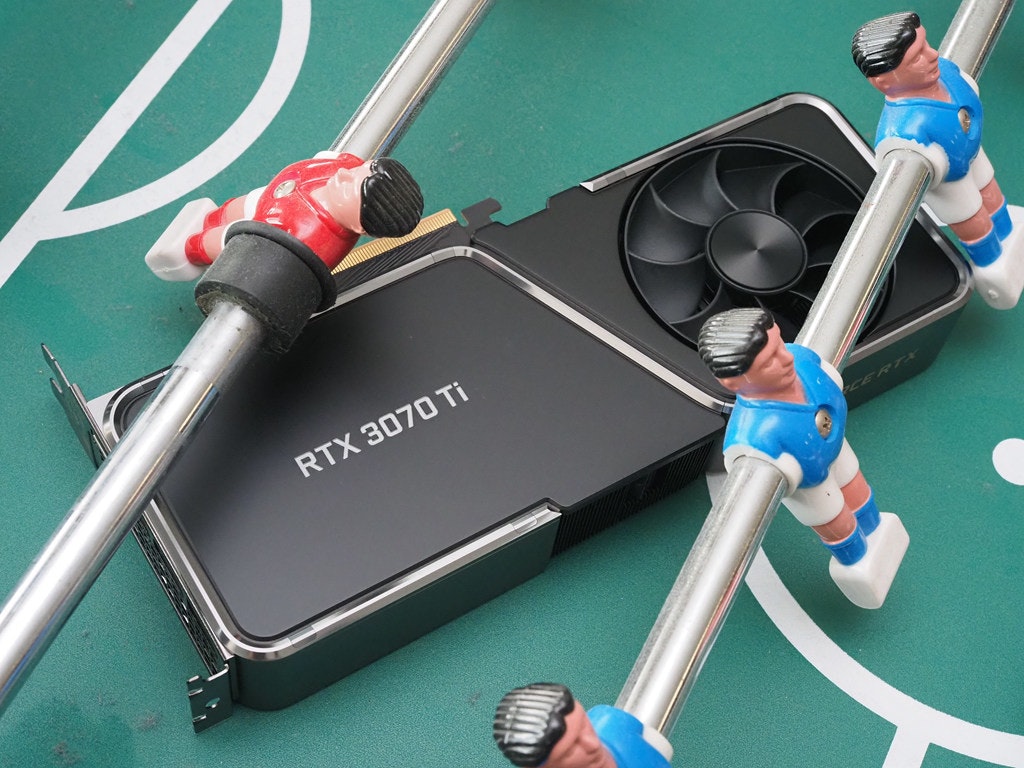 RTX 3070 can be said to be a very popular product in the RTX 30 series on the eve of the shortage of cards, because it has the strength to compete with the previous generation of card king RTX 2080 Ti, but it only requires less power supply and a price starting at 499 US dollars. At the same time, Founder Edition also demonstrated that the RTX 3070 can provide sufficient performance with a compact heat dissipation structure; and this year NVIDIA will bring an upgraded version of the RTX 3070 Ti, with a price difference of $100 in exchange for the improvement of the structure and GDDR6X memory. This time I also borrowed the official version of NVIDIA RTX 3070 Ti Founders Edition for testing.

▲The heat dissipation design and structure of the RTX 3070 Ti below is similar to the RTX 3080, which is significantly different from the RTX 3070 with the fan on the same side (photos are not scaled to scale)

▲Although the design of the fan is similar to RTX 3080, except that it is slightly shorter, the frame does not form an 8 character but an S character

Compared with the RTX 3070, it has more cores and higher clock settings. In addition to affecting the operation, the official power has been increased from 220W to 290W in one fell swoop. The official power system recommended by NVIDIA has also been increased from 650W to 750W, which is in line with RTX 3080. , But presumably some of the card manufacturers’ self-made cards will further improve the clock in exchange for performance, but this is not within the scope of this discussion.

▲The back panel design echoes the front S-shape

▲When the special effects are fully turned on, 4K resolution but no DLSS

▲The performance has been significantly improved after DLSS is turned on

▲Tomb Raider: The test performance of Shadow, using DX12 and turning on and off DLSS

▲Tom Clancy: Hunting in the Line of Fire-Wild

From the test data, it can be seen that thanks to more cores, higher Boost clock and higher speed GDDR6X (and of course more power), the performance of RTX 3070 Ti has been improved to a considerable extent. Under the fan design of Edition, 20 rounds of Time Spy and Fire Strike tests were conducted with 3DMark. The CPU temperature in an open space environment is about 78 degrees Celsius. If it is installed, the air circulation in the chassis must be considered. The Founders Edition’s radiator cover design, the heat of the GPU is mainly discharged from the fan on the side of the backboard, and the heat of the rear fan that diverts upward is relatively small.

▲The situation after 20 rounds

▲The bare test temperature is controlled within 80 degrees

▲After the FireStrike Ultra 20 round, the temperature is also controlled within 80 degrees

Compared with the RTX 3080, the RTX 3070 Ti has a slightly higher clock frequency, but the total number of cores is still much smaller, and the memory of the RTX 3080 is still 2GB different in size. I believe that if you are pursuing a 4K gaming experience with all special effects, RTX 3080 will still have advantages over RTX 3070 Ti; but if it is based on the requirement of 2K resolution, the performance of RTX 3070 Ti is already quite abundant, and with more and more content that supports DLSS technology, it can go further. Improve the FPS of the game.

▲Performance is higher than RTX 3070, but keep a proper distance from RTX 3080

In addition, the RTX 3070 Ti and the RTX 3080 Ti that were sold earlier are LHR’s mining performance limiting chips. Although the current graphics card market due to mining demand caused new cards to be launched, they still cannot be bought immediately as last year. However, with the subsequent LHR strategy of consumer products and the shipment of special mining card products, coupled with the obvious fluctuations in the current digital currency market, it may be difficult for the price to return to the end of last year after a while, but one card is hard to find The situation should gradually improve.

▲The overall performance is not inferior, but it has a significant improvement over RTX 3070

From the results, although the RTX 3070 Ti did not have nearly the following performances, it also moderately made up a gap between the RTX 3070 and RTX 3080, and it did indeed bring moderate performance from the performance. Growth, but will not affect the RTX 3080. For gaming and entertainment with QHD or mid-to-high-end 4K resolution, the RTX 3070 Ti will be a very suitable choice in terms of performance and price.