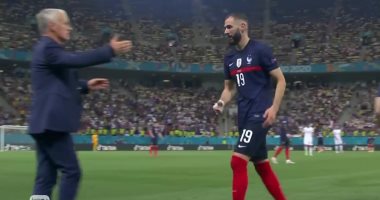 French star Karim Benzema was injured during the France national team match against his Swiss counterpart in the first extra half of the match that the two teams are currently meeting at the Arena Nacional in the round of 16 of the European Nations Cup “Euro 2020”, which is currently being held with the participation of 24 teams in 11 A different city and will continue until the eleventh of next July.

The injury came in the first overtime period of the match, which resulted in a 3-3 draw, as the player felt some discomfort to ask for a change and was replaced by Olivier Giroud.

Benzema scored the first and second goals of the French national team in the 57th and 59th minutes.

France qualified for the round of 16 after leading the standings of Group F with 5 points, as it beat Germany 1-0 in the first round, before drawing with Hungary with a goal for both in the second match, and with two goals against Portugal in the top of the confrontations in the final round..

Switzerland qualified for the round of 16 by occupying third place in Group A with 4 points, after drawing with Wales 1-1, losing to Italy by three, and beating Turkey 3-1..

France and Switzerland have historically met in 38 matches in all competitions, France won 16 matches and lost 12 matches to the Swiss team, and 10 matches ended in a tie.

The winner of that match will meet Spain in the quarter-finals, after El Matador won a marathon victory over Croatia 5-3 today..