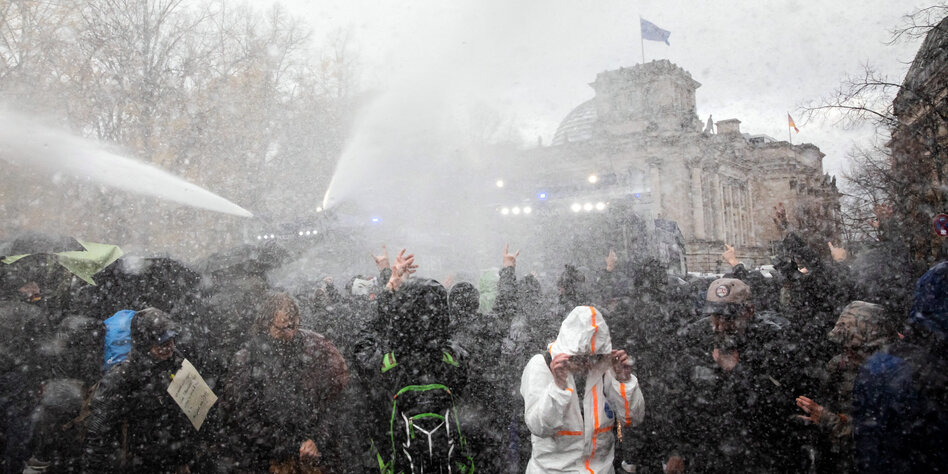 Confusion and disinformation only serves tyrants. A passionate plea in defense of Europe’s humanistic values.

Demonstration against the Corona restrictions in front of Parliament on November 18. in Berlin Photo: Christoph Soeder / dpa

During the Corona curfew, my father hovered between life and death in the hospital in Paris. I experienced roadblocks, shielded hospitals, the cruel loneliness of the patient in the hands of the overburdened staff. I learned about the fear of relatives, who begged doctors to visit their loved ones and begged police officers to allow them to cross the deserted city.

I felt this feeling of heaviness: to be at the mercy of the humanity of others.

That’s what the crisis taught me. Each of us depends on the ability of others to be human at some point in our lives. The tide can turn quickly. Those who demonstrate today against the regulations to protect against the spread of Corona may tomorrow be the first to beg for solidarity.

They seem to me the expression of a triumphant individualism. An idea that everyone has the right to defend their little comfort, their wishes and opinions without limit. Social networks have given this development the means to succeed. A phenomenon that at first glance seems to serve democracy, but in reality threatens it with its maddening excesses.

Because if everyone absolutely expects that every wish will be implemented by politicians, a joint decision is no longer possible. A collective project cannot result from the uncompromising juxtaposition of a multitude of different and sometimes antagonistic feelings.

Democracy depends on the ability of its citizens to understand the rules of the game. To respect you. The dialogue, the consensus, the compromises. And that means accepting that your own will cannot always be absolutely satisfied.

Rather, democracy is in danger if the principle of representation is slandered, members of the Bundestag are insulted and parliament is attacked. It is in danger if the legitimacy of experts and scientists is flatly rejected and empirically ascertainable facts are discredited. If you always think your own opinion is knowledge.

The past teaches us that a certain amount of confusion can lead to a lunatic representation of the world and can lead to murderous actions. In 1944, Theodor W. Adorno and Max Horkheimer describe such a development in the “Dialectic of Enlightenment”. Where one refuses to confront the opinion with that of others, to check it, it becomes a simple conviction, a simple explanation of the world that does not require your own reflection.

One takes refuge in the stubborn rejection of arguments, of factual evidence that contradicts one’s own convictions. A belief that often consists of a mixture of rumors, conspiracy theories and emotions. It leads to paranoia, in which every contradiction is perceived as a personal attack. One small step only to the insane deed.

Pandemics are just one of the many challenges that await us in the 21st century. In order to master them, humanistic values ​​as enshrined in the European constitutions will be of decisive importance. We must oppose those who try to discredit them as weak, naive, or deceptive. The common humanistic values ​​are the prerequisite for our survival.

The 20th century has shown us what man is capable of when he loses his humanity. It destroys itself. Today we are again confronted with world views that see people as a means and not an end. Which make it an instrument of a state apparatus, an ideology, an economic system or technological experiments.

Lies are systematically spread by authoritarian regimes in order to be able to better instrumentalize the population. Where freedom is restricted and repressive powers rule, people submit more willingly to serve as cogs in the machinery.

But even in the democracies of Europe there is a risk of losing sight of the lessons of history. It is not uncommon for me to meet people, also in my circle of friends, who openly admire China’s economic success or that of a world power like Vladimir Putin’s Russia. Even human rights crimes, such as Beijing’s genocide of the Uyghurs, pale beyond the fascination for the law of profit or the virile self-portrayal of power.

Some don’t necessarily vote for populist parties. They see themselves as tolerant and democratic. But they use populist rhetoric. Resentment and frustration are reinterpreted as “resistance” to “political correctness”. The more superficial the knowledge, the more provocative the defamatory slogans are.

It is believed that there is no consequence in spreading such an attitude and carelessly invoking the relativism of moral values. You think words don’t kill. And so you gradually forget to be the person you once were. And busy digging at the grave for freedom and democracy, in the name of a dehumanized system.

Certainly democracy thrives on strife, debate and diversity of opinion. An open society has to constantly rework its borders. That is precisely what gives her legitimation. Concerns about the health policy of the authorities, the weaknesses of democracy, should be articulated without moral censorship. But having only one opinion that is self-founded is a dangerous shortcoming.

It would be a fundamental misunderstanding to confuse violence with strength, ruthlessness with courage, money with success, quantity with quality, opinions with facts.

Such confusions show how much words can be robbed of their meaning. When language is contaminated in this way, there can be no more argumentative exchange, no real argument, no knowledge and no truth that we share with one another. A people that is no longer capable of judgment in this sense can be manipulated infinitely, Hannah Arendt once stated.

It is up to each of us in Germany and Europe to resist the disorientation that a minority is trying to promote effectively. Confusion and disinformation only serves tyrants. Our community of values, on the other hand, needs a clear orientation. Europe must give the words democracy, justice, courage and freedom themselves their meaning by living these humanistic values ​​unequivocally and conveying them to its citizens through education.

In Europe, human intellectual development must be the measure of progress, and not just economic performance or technological inventions. Otherwise “the fascination for large numbers” threatens to undermine our ability to appreciate what is difficult to measure in numbers: justice, truth, morality, freedom, the creative – man himself and the blurring of the human condition.

Humans cannot be reduced to statistics, algorithms, data. It is both rational and irrational. If the irrational dimension of man is denied, then demagogues use this blank space for their political purposes, to appeal to the lowest instincts of man and to satisfy their vulnerability to myths and conspiracy theories.

Humanistic values ​​are not a moral accessory that makes us look pretty. They help us to overcome challenges, to shape the future together and to recognize the dangers. They help us to live more consciously.

The more consistently Europe follows this path, the stronger its normative influence will be. The more credible his endeavor to serve the demands of man, to overcome his fear, his prejudices and his basic instincts – to transform his suffering into freedom and to rise to creative reason.