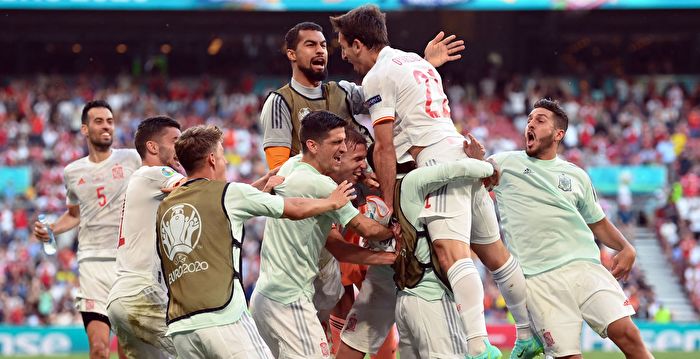 As a traditional strong team in the world, Spain in 2008European CupAfter winning the championship, it started a heyday and achieved three consecutive world championships; however, due to the talent gap in the “Matador Corps” in recent years, it has gradually fallen from the top.In this European Cup, Spain stumbled in the group stage, one win and two draws. They failed to secure the top spot in Group E and had toKnockoutFacing the last World Cup runner-up Croatia.

Only 20 minutes into the game, Pedri returned a pass, Spain goalkeeper Simon stopped the ball and the ball rolled directly into the gate. This incredible goal was the ninth “own goal” in this game. Afterwards, the passive “matador” made a big effort, and Saravia, Aspilicueta and Ferran Torres each scored a goal to overtake 3:1.

At this time, there were only 15 minutes left in the game, but Croatia persisted in suspense. In the 7 minutes after the 85th minute, they scored two goals and tied with 3:3. In overtime, Olmo, who came off the bench, made two passes, assists Morata and Ojazabal, and made the “Matador” the last laugh at 5:3. This is the first time they have played in an international competition in nine years. Win in the knockout rounds.

With the halo of the World Cup champion, the French beat Germany and Portugal from the “death group” to advance to the top spot. The “Gaul Rooster” naturally does not put the Swiss in his eyes. In the first half, Seferovic scored a header and gave Switzerland a 1-0 lead. Soon after the change, Switzerland won another penalty shot. Unfortunately, Rodriguez took the penalty and was saved by goalkeeper Lori, allowing the Frenchman to escape.

Missing the opportunity to expand the score, the Swiss was immediately punished. Benzema then kicked his head and scored two goals in three minutes, giving France a 2:1 lead. In the 75th minute, Pogba shot a “world wave” from a long distance, and then went on to another victory. The score of 3:1 made the French seem quite safe. Coach Deschamps retreated at this time, ready to defend the last 15 minutes. This gave the Swiss the last chance to give it a go.

In the 81st minute, Seferovic scored a header in front of the goal and got the Swiss team back. In the 90th minute, Zhaka made a straight kick and penetrated the French team’s defense line. Gavlanovic shot in the middle. Scored the goal and helped Switzerland equalize the score 3:3.

In overtime, both teams failed to score goals, the game entered a penalty shootout, and the winner was decided. In the first four rounds of the penalty shoot-out, players from both teams scored smoothly. In the fifth round, Mehmedi of Switzerland lied to Lori to make a hit; the pressure came to the French, and the French team sent the star Mbappé. As a result, the 22-year-old played a smashed shot and the shot was shot by Swiss goalkeeper Sommer, and the “Gaul Rooster” had to go home in advance.

If you don’t count the penalty shootout, France has been unbeaten against Switzerland for 29 consecutive years, with a record of 3 wins and 5 draws; this time the Swiss became the final winner-the first quarter-finals of the World Series after 67 years.