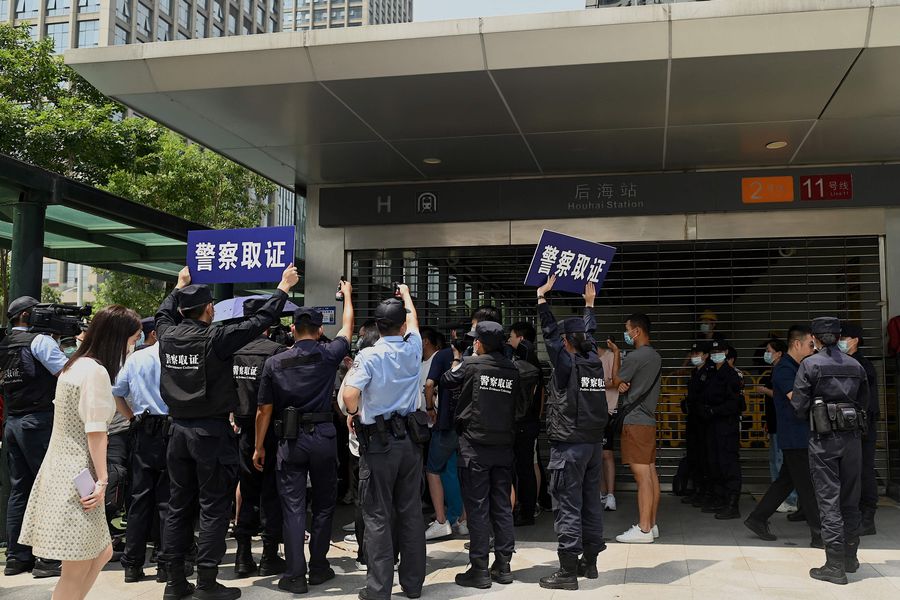 Based on a business with “more than 1,300 projects in more than 280 cities in China”, which would benefit “more than 12 million owners”, on the page of the real estate giant Evergrande you can still read the slogan of its founder , Xu Jiayin, who states that the firm “persists in the concept of developing the welfare of the people and the prosperity of the nation, so that we make unremitting efforts to improve people’s living standards.”

The bombastic words of its president, who in August resigned the leadership of the company’s real estate branch, contrast with the drama that the firm is putting through to Chinese families, who this week demonstrated in the headquearters of the city of Shenzhen of the company, which has acknowledged that it faces “unprecedented difficulties”, although it denies that it is about to collapse.

“Do you think it is easy for us ordinary people to earn money? We sold everything we had, so that we could buy a property with Evergrande, because supposedly you were one of the top 500 companies in the world. If they don’t give me my money back, I’m going to jump off a building. They cheated us with all our money, “said a Chinese protester, according to statements collected by the South China Morning Post.

But the company, ranked 122nd in the most recent Fortune 500 count, not only failed the people, it would also be about to fail the nation. Although the senior authorities in Beijing have opted for silence, a spokesman for the National Bureau of Statistics acknowledged that “the situation is under surveillance.”

The real estate sector, which according to the latest available data represented 7% of China’s GDP in 2019 and 17.2% if it is added to the other industries that cross it, has been generating noise for quite some time, so much so that the Xi Jinping’s own government has tried to take steps to cool it down, given the associated systemic risks. In fact, the company’s crisis has already begun to affect Chile, being one of the elements that explains the recent declines in the price of copper, including today’s 1.02% drop, according to analysts.

In this way, Evergrande – the second largest real estate developer in Chinese sales – is the best exponent of both the growth of the sector, and its problems. Its assets totaling 2.3 trillion yuan (US $ 356.6 billion) and an annual sales volume of more than 700 billion yuan show how colossal the company is, while its liabilities of US $ 305 billion la make it the most indebted real estate company in the world.

With the extension of loans with banks in the middle of this year, it lost its most important source of financing, being already vetoed to seek resources through commercial letters or bond markets, where it qualifies as the largest issuer of junk bonds. from Asia. In this context, the company already has some of its assets frozen and has stopped some of its projects.

But the situation is going from bad to worse for the firm, which has seen an 82.3% drop in its shares over the course of 2021. According to a Bloomberg report, this week the Ministry of Housing and Urban-Rural Development reported in a meeting with different banks that Evergrande will not pay the interest on a loan that is due as soon as this September 20, increasing fears about a major disaster.

This is how communist China may be facing a dilemma not unlike the one faced by the capitalist United States for the financial crisis. “What we see with the potential collapse of Evergrande is the question faced by political officials as to whether it is a company.”too big to fail“(Too big to fall), if it is the equivalent of our AIG,” indicates the analysis of William Lee, chief economist of the California think tank, Milken Institute, in reference to the large insurer that rescued the US government in 2008.

Fitch, which lowered the rating of the troubled giant on September 7 for considering a default “probable”, also alarmed about the systemic problem to which its fall may drag. “We believe that a default would reinforce credit polarization among homebuilders and could result in headwinds for some smaller banks,” he said in a report released Wednesday.

Although the agency qualifies the tone, underlining that “the overall impact on the banking sector would be manageable,” it explains that “growing investor concern about Evergrande’s creditworthiness has already exacerbated credit polarization among developers, leaving to those with weaker credit metrics struggling to take advantage of debt markets at sustainable interest rates, they increase the risk of refinancing ”.

In this framework, Lee states that “what we will see is that Beijing is potentially going to intervene, if not directly it will certainly do so indirectly by taking part of the debt and thus ensuring that the property of the people in China is protected, which is really “critical to driving consumer demand that is languishing according to the latest data.”

This vision is shared by Fitch, which postulates that “the government’s priority in a default scenario is the completion of the projects sold” of the firm. That, considering that “a breach of Evergrande could damage consumer confidence if it affected the deposits of households for houses that have not yet been completed.” Under this analysis, the agency assumes “that the government would act to protect the interests of households.”

Goldman Sachs also argues that systemic risks go along these lines. In a report released Thursday, it states that “more interruptions in the company’s real estate development operations can be very negative for confidence among buyers and investors of national properties and, potentially, have an impact on the real estate sector in general.” In this context, it indicates that if it manages that “the operations of the property on land can be maintained as a business in operation, that could have less possibilities of impact of contagion”.

The bank also reports that “Evergrande announced that they have hired financial advisers to assess the capital structure of the company and find solutions for all stakeholders.” Meanwhile, the aforementioned Bloomberg report states that the Chinese authorities would already be working on a restructuring of the company’s debt, for which they would be relying on legal and accounting experts who delve into the group’s finances.