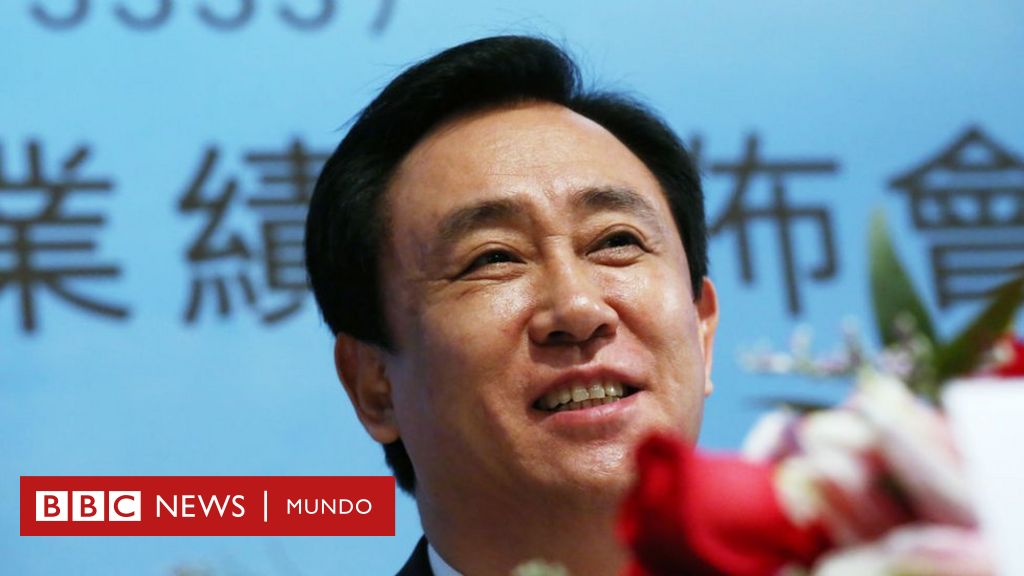 “I firmly believe that with the efforts and hard work of all of you Evergrande will emerge from its darkest moment,” Xu Jiayin, president of the real estate giant, wrote in a letter to his employees this week.

The optimism expressed by Xu in the letter is far from the vision that international creditors and analysts have about the crisis he faces. the world’s most indebted real estate company.

A giant on the brink of collapse that has shaken the stock markets and has raised alarms about a possible “contagion effect” of the crisis to the rest of the Chinese economy and the international financial system.

Evergrande, which manages 1,300 real estate developments in 280 cities in the country, has its creditors -in and outside of China-, its suppliers, its employees and the thousands of families who invested their savings in the purchase of houses and now they fear being ruined.

With a debt estimated at about US $ 300,000 million, equivalent to 2% of the country’s GDP, investors wonder if the Xi Jinping government will implement a rescue, drop it, or design some formula for some of those affected to receive part of the money invested in the firm.

The most dramatic have described the eventual collapse of the firm as the “China’s Lehman Brothers moment”, referring to the precipitous collapse of the US bank that triggered the 2008 financial crisis, although the consensus among many experts is that there would be an “orderly” bankruptcy.

“Chinese government officials have been busy intervening and actively working on a feasible restructuring plan,” Zhiwu Chen, director of the Asia Global Institute (AGI) and senior lecturer at the University of Hong Kong, tells BBC Mundo.

The visible face of the debacle is Xu Jiayin, also known as Hui Ka Yan in Cantonese.

What is the story of the president of Evergrande and what does he represent in the context of the expanding Chinese economy and the debt boom?

Xu Jiayin, “the king of debts”

The so-called “king of debts”, who became one of the richest men in China, fits perfectly in one of those stories of self-improvement, promoted by the government, much like that of other billionaires such as, for example, the founder of Alibaba, Jack Ma (who suddenly fell from grace late last year).

And Xu’s loyalty to the government has been untouchable. Before reaching the current critical situation, the billionaire used to attribute his success to education and the Communist Party.

“Without the resumption of the national university entrance exam, I would remain in the field. Without a 14 yuan state scholarship, I would not be able to go to university. Without reform and opening up the country, Evergrande would not be what it is today.” said in a speech collected by the Agency France–Presse.

“Everything about Evergrande is given by the Party, the State and society.”

This 62-year-old man has been characterized by local media as a billionaire with a taste for luxury brands, yachts, expensive clothing and an excellent relationship with the Communist Party that would have allowed him to rise amid the real estate boom.

His links with the political and economic elite, which helped him build his empire, would now be hurting him under the restrictions that the Chinese government has imposed on big business and the gigantic fortunes of billionaires.

“While the Communist Party controls everything in China as required by the Constitution, trade agreements a practical level are made on the basis of connections or relationships, “explains Zhiwu Chen.

“Even strict regulations and rules can be overcome if you have the right connections. That is why Evergrande was able to borrow at such a gigantic level, despite all the strict regulations,” says the researcher.

From rural poverty to becoming a real estate mogul

Born into rural poverty and turned into a real estate mogul, Xu’s fortune has grown as fast as China’s economic expansion over the past two decades.

Originally from a town in the central province of Henan, his father was a warehouse worker and a veteran of the Chinese Civil War. His mother died when he was eight months old.

Raised by his grandparents, Xu recounted in a 2017 speech that during his childhood he mainly ate sweet potatoes and bread.

“At that time, my biggest wish was to get out of the field, find a job and be able to eat better, “said the businessman on that occasion.

In his youth, Xu worked for a steel company in southern China where he rose through the ranks and ended up as general manager of the plant.

In 1992 he left his job and moved to Shenzhen – the neighboring fishing village of Hong Kong that eventually became the so-called “Chinese Silicon Valley” – to try his luck as a salesman in a steel conglomerate and little by little he developed his career in a state company.

It was the same year that Deng Xiaoping (promoter of the pro-market reforms that earned him the nickname “Architect of Modern China”) visited Shenzhen, fostering the entrepreneurial spirit in what would be the first city with a special economic zone. from the country.

It was like that in 1996, Xu founded Evergrande in Shenzhen, a company dedicated to the massive construction of houses.

From then on the growth of his real estate seemed unstoppable.

Such was the success that in 2008, the firm was listed on the Hong Kong Stock Exchange and in 2017 the real estate mogul became the richest man in China, according to Forbes.

Along the way, Xu expanded his investments to very diverse sectors. He bought a soccer team (the Guangzhou Evergrande) and made investments in electric vehicles, tourism, bottled water and other industries.

Despite having amassed a fortune of more than $ 43 billion, his current wealth is around $ 10.7 billion according to Forbes estimates, although according to the Billionaires Index of Bloomberg, does not exceed US$7.300 millones (with figures updated to September 22).

Just as the country went from being a rural and impoverished society to being transformed into today’s gigantic economy, Xu went from humble beginnings to a position of success that allowed him to rise to the top, before he came out into the open. the insolvency of your firm.

According to Chang Che, a business writer for SupChina, a medium specialized in analyzing events in China for the West, the businessman led a rather exuberant lifestyle.

At the 2012 annual parliamentary session in China, known as the “two sessions,” Che writes, the businessman “wore a black suit with a belt with gold buckles from French luxury brand Hermès, the most expensive belt for the communist gathering. biggest in the world”.

With that appearance he earned the nickname of “hbrother of cinturon “.

At the time, Che explains, the tycoon “was the model for China’s crazy nouveau riche,” who flew their private jets or bought millions of dollars worth of yachts.

“If Xu’s rise from rural poverty to real estate mogul owes a lot to the Communist Party, then his downfall has its roots in the Party’s radical change: a rebuke to the capitalists, the wealthy class, and Party officials who helped prosper developers “, he points out in his analysis.

And “if the anti-corruption campaign attacked the unwritten rules of Chinese real estate, the incipient campaign of ‘common prosperity‘ de Xi Jinping aims to transform the country’s financial system, which facilitated the emergence of real estate moguls like Xu, “he says.

In his view, the businessman represents the excesses of an economic system that “worked for political and economic elites in the past” but has changed under Xi’s plans.

The debts of the giant were not a secret, although the magnitude they reached in recent months revealed the real possibility of its collapse.

Several years ago the company was known for issuing extremely profitable bonds with which it financed its explosive growth.

As early as 2017, she had earned the nickname of being the “world’s most indebted real estate agency” in investor circles.

Despite the high level of risk, the huge debt was not considered at that time a red light that could jeopardize its commercial viability.

However, things took a turn when in the middle of last year the Xi Jinping government announced measures to control the indebtedness of real estate.

Evergrande reacted by arguing that it had liquidity problems and could therefore have difficulties in meeting its commitments.

The frantic race to reduce debt

Thus, the real estate’s serious solvency problems were publicly exposed and a frantic race to reduce its indebtedness began.

The firm devised a plan to cut its debt in half by 2023. It listed deeply discounted properties for sale and divested parts of its auto and tech businesses.

The plan did not yield the expected results and the company kept falling into a hole ever deeper.

Like a snowball, the bad news affected investors’ expectations, the risk rating was falling lower and lower and appeared more and more creditors demanding their money.

Thus, in August of this year, the company reported a spectacular decrease in its net profits and warned that some of its real estate projects could be at risk.

In recent weeks the firm has warned that there are no guarantees that you can meet all your financial obligations in your current situation.

“A campaign to reduce financial risks”

Trey McArver, co-founder of the analysis firm Trivium China and editor of China Politics Weekly, argues that Xu Jiayin is a symbol of the new restrictions that the Chinese government has imposed on business giants in different economic sectors.

However, for the analyst, the Evergrande crisis “has not been caused by the ‘common prosperity’ initiative and, fundamentally, is not really related to it.”

The potential collapse of the real estate “is really the result of the financial risk reduction campaign broader that has been underway since 2017, “he tells BBC Mundo.

Regulators, he argues, may even end up “framing the problem as one of common prosperity,” but in practice, the backdrop is to reduce risks.

In this context, there may be “more pressure to sanction any shady dealings by Xu and other Evergrande executives,” says McArver.

For now, while the government determines who will “pay” the costs of the Evergrande crisis, he adds, it is more likely “that they will be wealthy shareholders“instead of people who bought homes.

Now you can receive notifications from BBC News Mundo. Download the new version of our app and activate them so you don’t miss out on our best content.