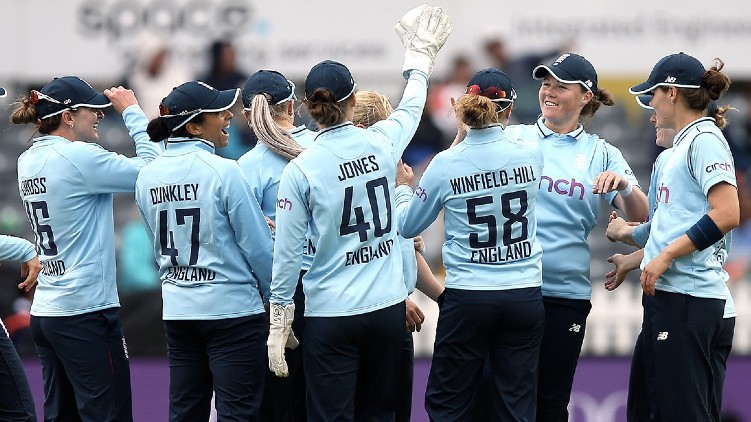 By : Basith 3 hours ago comments

India scored 201 runs for the loss of 8 wickets. After losing the toss and opting to bat, India lost debutant Shafali Verma in the fourth over. Shafali (15), who scored fast with three boundaries, was caught by Katherine Brunt and Anya Shrabzol. After the first wicket fell, India went to the defense. When Shafali was out, India’s total was 23. In the 10th over, Smriti Mandana was bowled clean by Shrabzol and India managed to add just four more runs to the total. Smriti was dismissed for 10 off 25 balls.

India’s most experienced batsmen Poonam Rawat and Mithali Raj added 56 runs for the third wicket. But it took India 15 overs to score these runs. Kate Cross smashed Poonam Rawat (32) in the 26th over to break the tie. Poonam, who faced 61 balls, was caught by Eccleston. Harmanpreet Kaur (1) returned quickly. Eccleston was the wicket-taker. Deepti Sharma joined Mithali for the fifth wicket. The duo combined for 65 runs. Deepti, who scored 30, was bowled out for a wicket by Shrabzol. Mithali (72) was also dismissed soon after. The Indian captain was bowled out by Ecclestone. Ecclestone completed the wicket chase by dismissing Pooja Vastraker (15). Tanya Bhatia (7) fell in front of Katherine Brunt. Shikha Pandey (3) and Jhulan Goswami (1) were not out.

In reply, England faced the Indian bowlers with ease. Goswami smashed Lauren Winfield-Hill (16) in the fifth over to give Tania Bhatia a breakthrough, but Tami hit the Indian bowlers in the middle of the innings. The batsman, who often maintained a strike rate above 100 in the innings, swung the bat with ease. Tami, who put on a 59-run stand with captain Heather Knight for the second wicket, found Heather (18) the best partner in the Natalie sever as Ekta Bisht bowled clean. The duo added an unbeaten 119 for the third wicket.

Flowers and Twentyfour News are teaming up for the Kovid fight
COVID WAR 24X7 Through the campaign. This is a war. The war we are waging together with the sole aim of victory.