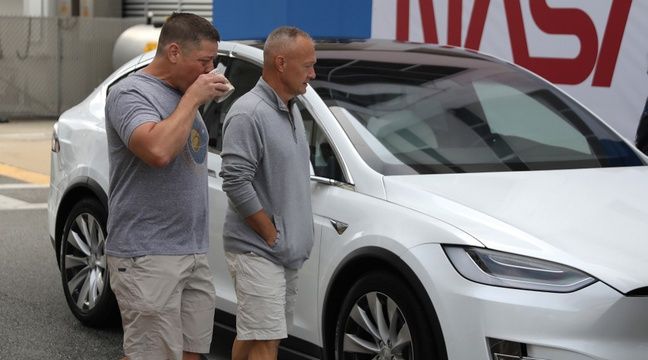 In their white and gray “Space Odyssey” jumpsuit, Bob Behnken and Doug Hurley are the first American astronauts
to leave for the ISS from the United States since 2011. A logical course for these two experienced pilots and astronauts, recruited at the
Nasa the same year, and married to astronauts.

Both have the traditional look of Nasa men: the military haircut, the short, precise verb, never in a hurry. Smiling, reasonable, competent, reliable: the hallmark of astronauts. They met in 2000 at the start of their space agency training, and have since become best friends, said Doug Hurley, 53.

I’ve often said that our astronauts are the best America has to offer. @AstroBehnken and @Astro_Doug are truly the best of us. Godspeed tomorrow. #LaunchAmerica pic.twitter.com/ebrIx440QK

They have already traveled in space

Like a long tradition of astronauts before them, they came from the Royal Way to be recruited by the space agency: to be a military test pilot. Behnken, 49, holds a doctorate in mechanical engineering from the California Institute of Technology, enrolled during his studies and finished at the legendary Air Force Test Pilot School at Edwards Air Force Base in California. Colonel, he flew on 25 different planes, including the F-22 fighter. Doug was also a colonel but as an aviator in the Marine Corps, an F-18 specialist pilot.

Between 2008 and 2011, they each traveled twice, separately, on space shuttles, the previous American means of space transportation. In 2015, NASA gave them their next mission: the first manned demonstration flight of the Crew Dragon capsule, built by a very young company called
SpaceX, California – a flight then planned around 2017. “As alumni of military test pilot schools, if we could have chosen a dream job one day, it would have been to board a new aircraft and lead a test mission, “said Bob Behnken on May 20, arriving at the Kennedy Space Center from Houston, Texas, the home of American astronauts.

It was in Houston that they founded their families, each with an astronaut: Bob is married to Megan McArthur, they have a six-year-old son, Theodore. Doug is married to Karen Nyberg, with whom he had Jack, 10. They each flew into space.

The bond of friendship that unites them is an obvious asset for such a risky mission, where they may have to take control of the aircraft, which is otherwise on autopilot. Doug Hurley is the more meticulous, even maniacal, of the two, according to Behnken. “If you need unnecessary information, Doug has it,” he quipped in a NASA video. Hurley himself admits to being the specialist in “obscure procedures”. As for Behnken, his friend says of him that he anticipates everything, “he always planned everything”. But his face is transparent: “He can’t bluff.”

On Monday, the boss of NASA checked one last time by text with his two astronauts: “Are you sure? “They both said they were ready for launch,” said Jim Bridenstine, insisting, “They are ready.” Patiently, Bob and Doug have been training for five years for this moment.