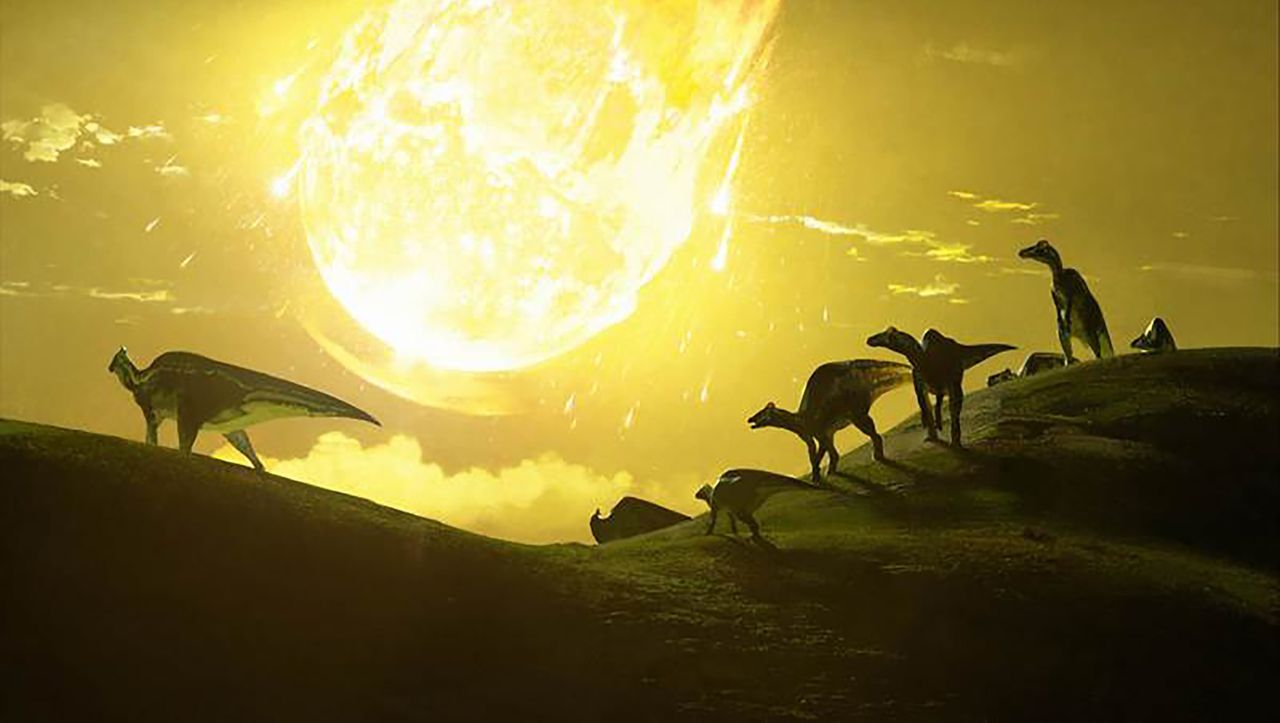 The fatal impact came from the northeast: 66 million years ago, a giant asteroid struck today’s Mexico and triggered a mass extinction on Earth. He left a crater with a diameter of 200 kilometers.

The rock from space was particularly devastating not only because of its size, but above all because of its angle of impact. This was around 60 degrees, which significantly increased the amount of gases that were thrown into the atmosphere and subsequently changed the global climate, according to a study published in the journal “Nature Communications”.

Such a corner is particularly deadly, explains study leader Gareth Collins from Imperial College in London. In particular, tiny sulfur particles blocked the sun’s rays, which led to a strong cooling of the earth and the extinction of the dinosaurs.

The research team from Great Britain, Germany and the USA examined the Chicxulub impact crater near Mexico and then simulated the impact. “Our simulations provide convincing evidence that the asteroid has hit a steep angle,” said study author Collins. The researchers coordinated their 3D simulations with the findings of an examination of the crater. To do this, they removed a core from a depth of more than 1,300 meters. The impact crater is now covered by one kilometer of sediment.

The research team simulated the impact at different angles (90, 60, 45 and 30 degrees) and examined the different impact speeds of the asteroid. By comparing them with measurement data for the Chicxulub crater, they determined the most likely process: Accordingly, the asteroid, which had a diameter of 17 kilometers, struck at an angle of about 60 degrees at a speed of 43,200 kilometers per hour. At a flatter angle of inclination than 45 degrees, the inner ring mountains in the crater could not have been created, the scientists write.

See Also:  what to know this Wednesday, June 24

The results fit the mass extinction at the end of the Cretaceous period – around 75 percent of all species then disappeared. “The worst-case scenario happened for the dinosaurs: the asteroid strike released an incredible amount of climate-changing gases into the atmosphere and triggered a series of events that led to the extinction of the dinosaurs,” says Collins.

Ulrich Riller from the University of Hamburg, who also belongs to the research group of the Chicxulub expedition, speaks of a “deadly corner”. “The fact that so-called evaporites, in particular gypsum, are missing in the drill cores is explained by the fact that the evaporation of such rocks is greatest at an angle of 60 degrees,” said Riller. This means that when the meteorite struck, huge amounts of toxic sulfate gases, water vapor and carbon dioxide were released into the atmosphere and darkened the sun for several years.

End of a long research puzzle

In a study from last year, researchers at the University of Texas (USA) had reconstructed what had happened in the first hours after the event by examining a drill core from the impact crater of the asteroid.

Just 24 hours later, a 130 meter layer of dust, earth and charcoal had piled up on the edge of the crater. In addition, a tsunami made its way towards the coast. The researchers believe that the megawave could have penetrated far into the interior of the surrounding continents. At the same time, huge fires spread. When the water withdrew, it took the charcoal caused by the fires with it and deposited it on the edge of the crater.

One detail in particular amazed the researchers even then: some of the rock in the core contained less than one percent sulfur, although the rock originally consisted of 50 percent of the material. The researchers’ explanation: Due to the impact, large amounts of sulfur compounds must have evaporated and released into the atmosphere.

This has now been confirmed by the investigations by the research team led by Gareth Collins. The researchers now believe that the final riddle of mass extinction has been resolved with the turning angle.