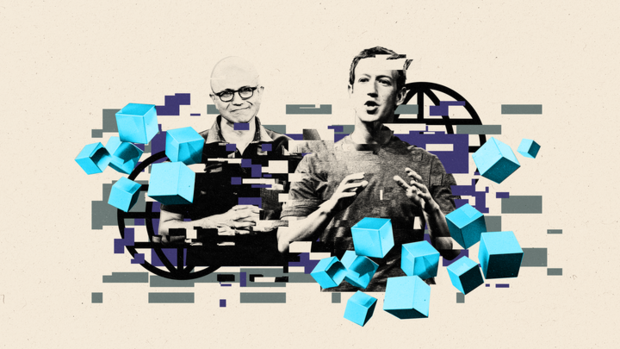 San Francisco If you believe leading tech bosses, it is no less than the future of the Internet: the metaverse. Mark Zuckerberg wants to turn Facebook into a “Metaversum company”. Microsoft boss Satya Nadella dreams of a “metaverse for companies”. And Nvidia boss Jensen Huang from a “metaverse for engineers”. Together, the companies of the top three managers are worth nearly four trillion dollars.

Outside of the tech world, however, many people are not yet aware of what the new concept is all about. One who can explain this well is Matthew Ball. He is considered to be the most important thought leader of the metaverse: Ex-Disney boss Bob Iger once said of the essays by the former head of strategy at Amazon Studios that he pays consultants tens of millions in order to get them what Ball writes for free on his site.

Ball describes the metaverse as “a network of three-dimensional, real-time generated, virtual worlds through which an individual with the same identity, the same objects, data and rights moves – and at the same time with an unlimited number of other individuals”. The metaverse is a further development of the mobile Internet – only made possible by the growing suitability of technologies such as virtual reality, 5G or blockchain.

So far, the metaverse has mainly been used in the world of computer games. Many parts of Balls Definition already fit on games or gaming platforms such as Fortnite or Roblox. There, players can meet in real time as comic-like, three-dimensional avatars.

The purpose for which Fortnite is played is becoming ever broader: If the game company Epic Games once developed the game world as a pure multiplayer shooter, today concerts by superstars such as Travis Scott or Ariana Grande are held there, game shows are held or new films are presented .

A player can not only watch the spectacle passively on the computer, but also take part in the surreal event with his avatar. At the concert on Ariana Grande’s Fortnite tour, you could ride a glittering llama or cross the stage with a paraglider.

Meanwhile, the avatar of the pop star flew in a spaceship towards the stage, shot at aliens and finally sang songs about a swing in a sky full of floating soap bubbles – all virtual, but certainly more varied than the laser or flame show of real concerts.

Ten dollars for a virtual t-shirt

The audience is part of the backdrop at Fortnite concerts. With the game currency V-Bucks, Fortnite players can buy “skins” that visually transform their characters into the superheroes Aquaman or Kylo Ren from Star Wars. For the concert, Epic Games introduced a glittering Ariana Grande skin that players could buy along with the paraglider and other objects for 1,500 V-Bucks (about ten dollars) – a lot of money for a virtual object, but cheaper than a real one Band shirt.

So far, the skins have primarily been the source of money for game operators such as Epic Games or Roblox. The idea of ​​permanent objects that players will one day be able to use across all virtual worlds is also a driver of the trade in Non Fungible Tokens (NFT).

These virtual objects are often created in the form of a digital video or image in JPG format. The storage on a blockchain is considered a kind of digital land register – and should guarantee the uniqueness. According to the Dapp Radar platform, the value of NFTs sold rose by a factor of 200 in the first half of 2021 compared to the same period of the previous year. The pixelated image of a blue head with an earring and a red cap (“Cryptopunk”) alone brought in 17.1 million dollars at a Sotheby’s auction.

The NFT boom is similar to the gold rush mood among URL dealers in the early days of the Internet – many want to secure a claim in the digital wild west without knowing exactly what it will be worth one day.

Emmett Shear is critical of all of this. The world’s largest live streaming platform Twitch, which Shear co-founded and is still running today, could one day become one of the portals in the Metaversum. Even today, 30 million people visit the Amazon platform every day, mostly to watch live streams of computer games and to chat with friends. Since the pandemic – similar to Fortnite – more and more live concerts, talk shows or commentary streams from live sporting events have taken place there.

“I divide the metaverse into two parts,” Shear said in an interview with the Handelsblatt. “On the one hand, there is this virtual world in which you can have incredible experiences – visit concerts that could never take place in the physical world. On the other hand, it stands for an artificial shortage of objects that the Internet has actually overcome. “

The price of an NFT, and even a ten dollar skin, is even less related to the cost of making it than a band shirt, Gucci handbag, or Van Gogh. An NFT can be generated for free, a Fortnite skin can be copied infinitely. “What they are selling is the feeling of holding Excalibur in your hand and making you feel like Arthur, king and future,” Shear scoffs. However, the Internet could be a “place of abundance” because virtual objects can be replicated free of charge.

Metaversum theorist Ball considers speculation with NFTs to be an “unfortunate but unavoidable side effect”. Because the blockchain is one of the basic technologies that make a connection between the virtual worlds of Fortnite and the worlds of other companies possible. “Blockchain technology is a good solution for the metaverse. It is based on the interoperability of currencies, data and valuables. “

Because like Epic Games with Fortnite, numerous technology companies are building their version of the metaverse. Facebook has just introduced Horizon Workrooms, an app for business meetings in virtual reality. For years, Zuckerberg has been betting that VR glasses will become the next internet platform. In 2014, Facebook bought the VR glasses developer Oculus for two billion dollars, and recently Facebook has also been considering entering the NFT market.

With the Hololens, Microsoft already offers a rival to Facebook’s Oculus Quest and, with AltSpace, a similar application for meetings in VR. The “Burning Man” festival was recently moved to AltSpace due to the corona pandemic. And the graphics and AI chip developer Nvidia has relocated an entire BMW plant to its “Omniverse”. In this digital twin of a future factory of the Munich car manufacturer, work processes are to be simulated in order to avoid planning errors in the real world.

Standards are a prerequisite

It is questionable whether there will ever be a singular metaverse: An Aquaman from Fortnite will probably not be walking through a virtualized BMW plant anytime soon. Nevertheless, it could make sense for the chip manufacturer Nvidia and Epic Games to agree on certain technical standards so that computers with Nvidia graphics cards display every Fortnite environment correctly.

The more companies build their virtual worlds on the same technical basis and protocols, and recognize currencies, objects and the identity of the avatars, the closer the metaverse is.

But there is a long way to go until then. Even today, interoperability is only partially realized on the Internet: You can navigate to most pages with the usual Internet browsers, but not the Darknet. A developer for Apple iOS operating systems cannot simply copy the code of their app into Google’s Play Store.

Fortnite is still a long way from the metaverse. The avatar and its purchased skins cannot even be transferred to other games, let alone to completely different worlds. Does Facebook have an interest in a user being able to wear his skin from the Ariana Grande concert in the Horizon Workroom? Couldn’t Facebook sell him the outfit again? “No single tech company wants to give up its sovereignty over it and share it with competitors,” says Ball.

If, on the other hand, the data about the appearance of the avatar, the credit in the game currency or items were on the blockchain instead of in an Apple or Facebook wallet, the power would also lie with the users. “The Metaverse is based on the assumption that we spend more and more time and work in the digital world. We therefore generate more data there, but also more valuable data. It is therefore attractive that users own their data themselves and decide to whom they provide which information, ”says Ball.

The decentralized structure of the metaverse is intended to avoid a dystopia in which the digital world takes up an ever larger part of life and the mega-tech corporations of today determine even more comprehensively what we see, hear and perceive. But that currently seems more like a pious wish, since with Facebook, Microsoft or Apple, which are also supposed to work on AR and VR hardware, these same corporations also want to dominate the metaverse.

Literary model of the metaverse

It is in such a dystopia that the term and concept metaverse also has its origin. The author Neil Stephenson introduced it in his cyberpunk novel “Snow Crash” in 1992: the protagonist “Hiro” escapes as a samurai sword-wielding avatar from his real life as a hacker and pizza delivery boy in a post-apocalyptic Los Angeles into the hyper-capitalist metaverse, that large corporations divide among themselves.

Wealthy people can access the virtual world with their VR glasses. Those who can only afford the public access terminals move through the metaverse as a pixelated black and white avatar that is visible to everyone.

“The metaverse is a dystopian nightmare. Let’s build a better reality, ”Niantic boss John Hanke recently headed a blog post. The San Francisco company has an interest in the physical world. As the developer of “Pokemon Go” and other games that combine augmented reality and public places, a completely immersive, digital world is more of a competitive event for Hanke.

But Hanke has a very simple reason for his doubts that right now many people want to plunge into ever more immersive worlds: “After eighteen months of Zoom, Netflix and Doordash, I definitely don’t feel like it.”