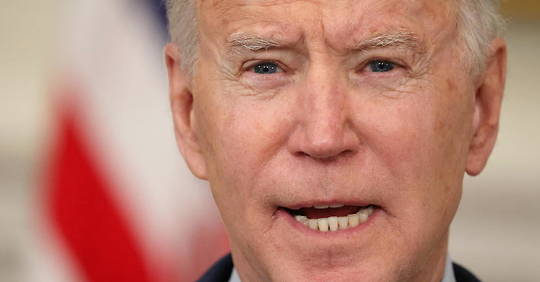 Un step forward and ten back. Joe Biden has taken drastic measures against Moscow, which should seriously complicate the holding of the summit which he himself proposed to Vladimir Putin. The US government announced Thursday April 15 a series of draconian financial sanctions against Russia and the expulsion of ten Russian diplomats. Since coming to power, the President of the United States has indicated that he is developing his response to a series of acts blamed on Moscow, including a giant cyberattack and further interference in last year’s US elections. . He promised to be much firmer than his predecessor Donald Trump, accused on all sides of complacency towards his counterpart in the Kremlin. The verdict is in, and it is harsh.

The 46e president of American history signed a decree followed by sanctions, which will allow Russia to be punished again, so as to engender “strategic and economic consequences”, “if it continues or promotes an escalation of its actions of international destabilization “, Warned the White House in a statement. A senior American official warned that part of the reprisals would remain “secret”, suggesting the possibility of a computer counterattack.

As part of this decree, the US Treasury banned US financial institutions from directly purchasing debt issued by Russia after June 14. It also sanctions six Russian tech companies accused of supporting Moscow’s cyber intelligence activities. It is a response to the gigantic cyberattack of 2020 which used as a vector SolarWinds, a US software publisher whose product was pirated to introduce a vulnerability among its users, including several US federal agencies. The Biden administration formally accuses Russia of being responsible for this attack, as it had already suggested.

See Also:  China indignant at US vote on Uyghur Muslims

In addition, the Treasury sanctions 32 entities and people accused of trying, on behalf of the Russian government, “to influence the 2020 presidential election in the United States,” according to the White House. And, in partnership with the European Union, Canada, the UK and Australia, the US government is also imposing sanctions on eight individuals and entities “associated with the continued occupation and repression in Crimea.” For its part, the US State Department expelled ten officials from the Russian embassy, ​​some accused of being members of the Moscow intelligence services.

All of these sanctions also aim to hold the Russian authorities “responsible” after accusations of bounties offered by Russia to the Taliban to attack American or foreign soldiers in Afghanistan. Donald Trump had procrastinated in the face of leaks on these accusations. It is therefore the first time that Washington has gone so far in accusing Moscow of having played a role. But the White House remains vague for the moment, saying only that this affair is “managed by diplomatic, military and intelligence channels”.

These sanctions come on top of a first series of punitive measures announced in March against seven senior Russian officials in response to the poisoning and incarceration of opponent Alexei Navalny. The NATO countries immediately expressed “their support and solidarity” to the United States “after the announcement of measures intended to respond to the destabilizing activities of Russia”.

It is one of the toughest offensives against Russia since the expulsion of many diplomats at the end of Barack Obama’s term. And the answer was not long in coming. “Such aggressive behavior will receive a strong rebuff. The response to the sanctions will be inevitable, ”warned Russian diplomacy spokeswoman Maria Zakharova. The American ambassador in Moscow was summoned by the authorities for “a difficult conversation”. “The United States is not ready to accept the objective reality of a multipolar world which excludes American hegemony and relies on the pressure of sanctions and interference in our internal affairs,” lamented the spokesperson.

Russia had already warned that the adoption of new sanctions “will not favor” the organization of a Biden-Putin summit supposed to initiate a stabilization in the deleterious relations between the two geopolitical rivals. The Kremlin thus seems to be disillusioned after having expressed its satisfaction on the possibility of such a summit, proposed by the new Democratic president in “a third country” and “in the coming months”. The offer was made during a telephone conversation this week between the two leaders, also marked by an American warning after the massive deployment of Russian troops at the Ukrainian borders.

The new Democratic president has maintained his proposal to hold this first meeting, made during a telephone conversation this week with his Russian counterpart. “The moment for de-escalation has come,” he said, urging in particular Vladimir Poutine to “refrain from any military action” against Ukraine, after the massive deployment of Russian troops on the Ukrainian borders. Joe Biden deemed necessary a bilateral summit “this summer in Europe” to “launch a strategic dialogue on stability” in the field of disarmament and security.

“It’s a storm in a glass of water”

The most spectacular measure announced Thursday, on the debt, is expected to have a limited effect, with Russia having only limited debt and reserves exceeding $ 180 billion, boosted by its hydrocarbon exports. However, it could be painful for the ruble, in fall Thursday, and already in difficulty since the first sanctions adopted in 2014.

“It’s a storm in a glass of water. For more than ten years, the policy of the Russian monetary authorities has aimed at keeping the budget deficit at a low level, “economist Sergei Khestanov told Agence France-Presse, who underlines that Moscow has been prepared for it” since. long time “. Since January and the coming to power of the new American president, relations between Moscow and Washington have deteriorated at high speed. The Russian ambassador to the United States was thus recalled after Joe Biden judged that his counterpart was a “killer”.