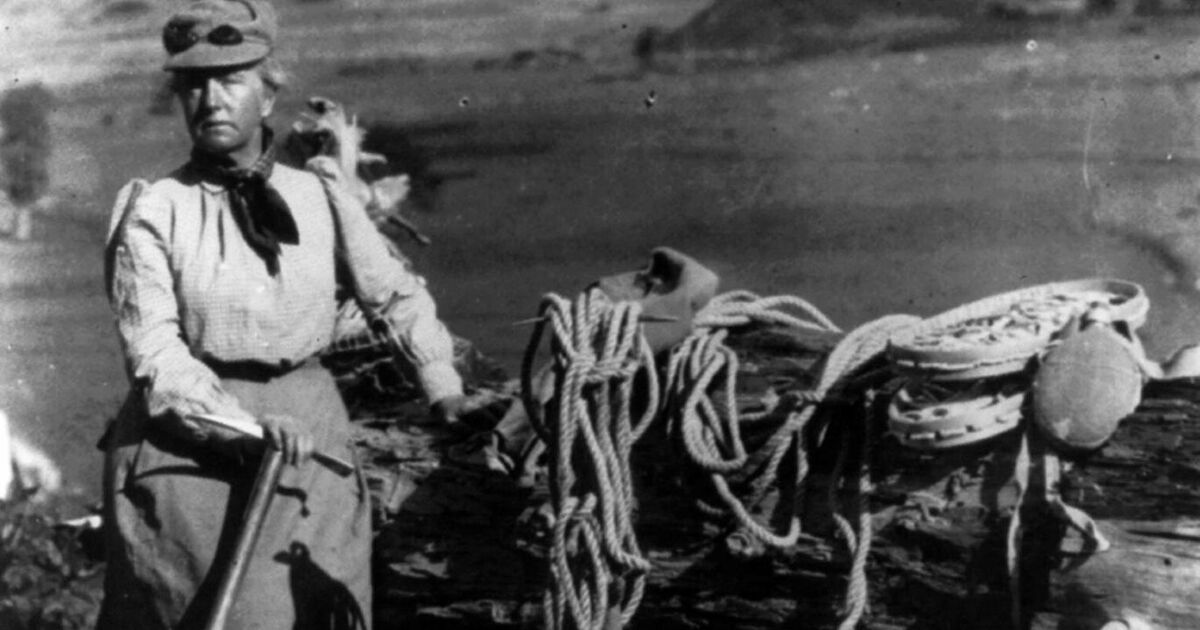 Every week with RetroNews, the BNF press website, back on a sports story as told by the press of the time.

The anecdote sums up the character of the lady. In 1906, the American Fanny Bullock Workman became the tallest woman in the world after her ascent of Pinnacle Peak, 6,930 meters in the Himalayas. She defends this record like a mother cat her babies. So when, in 1908, another American woman challenged her after having, she thought, exceeded 7,000 meters at the top of Mount Huascarán, in Peru, Fanny Bullock Workman paid a team from the geographical service of the French army to establish precisely the altitude of the Andean mountain. Measures taken, its competitor only climbed to some 6,700 meters. Fanny Bullock Workman stays on top.

The episode also says a lot about the means of the Bullock Workman couple. Wealth can encourage idleness. Or overactivity. Very clearly, rather than sleeping on it, Fanny Bullock and William Hunter preferred to spend their fortune to satisfy their appetites, which are more exotic and higher than their native Massachusetts. Both come from the same world. The wealthy and aristocratic families of the eastern United States. Among these people, young girls travel from an early age. “Fanny is staying in France and Germany. From childhood and adolescence, she developed a taste for adventure, as evidenced by certain short and new stories that she wrote. It features aristocratic heroines escaping their obligations and discovering the world. Already there is an attention to the status and rights of women, a thirst for travel and a certain attraction for the world of mountaineering “, writes the site History by women.

“Countries where no human being had ever entered”

Returning to the United States in 1879, she married William Hunter Workman three years later. It was he who introduced her to mountaineering in the White Mountains of New Hampshire. At the end of the XIXe century, American women, unlike their European counterparts, have a strong incentive to conquer the summits, and the mountaineering community is particularly progressive when it comes to women’s rights.

On the death of their respective fathers, and strong in their inheritance, Fanny and William settled in Germany in 1889. From there, at Fanny’s initiative, they embarked on more and more distant bicycle excursions (Switzerland, France, Italy, Spain, Algeria, India…) during which they continue to climb and nourish travel stories. Fanny Bullock Hunter will be one of the first women to climb Mont Blanc. She and her husband discovered the Himalayas at the turn of the century. Their notoriety reached the French press. “A woman, already famous for her explorations in the Himalayas, Mrs. Fanny Bullock Workman has just reached the hitherto unexplored summit of Koser-Gunge [Pakistan], 21,000 feet high, of which the enormous glacier, the Chogo-Lungmo, was considered impassable, relate the sling from 1is November 1902. The expedition had to suffer from terrible hurricanes, and with each step, it had to carve its way in the ice, several times the native kulis, carrying utensils and provisions, deserted, thus forcing tourists to descend to get other men. Nevertheless, the expedition was able to carry out its project. “ Relations with the natives will become a recurring problem during the couple’s expeditions.

“Fanny Bullock Workman has been a fervent campaigner for women’s suffrage, writes his biographer. She saw herself as a role model for other female travelers and mountaineers ”. If Bullock Workman was a forerunner in matters of female emancipation, this is far from being the case in his apprehension of the populations that the couple meets in their travels. In their travelogues, they talk about people “Exotic and singular, at worst primitive or even sub-human”. A vision quite in the western air of time at the beginning of the XXe century.

October 12, 1906, the truth relates through the menu a new expedition of the couple in the Himalayas. Where we learn that Fanny and William also work as geographers, correcting the data that others before them had established: “Part of the trip was made in areas where no human being had ever entered, and in several places travelers could see topographical errors appearing on existing maps.”

Stories of mountaineers in RétrosportsRoger Frison-Roche, writer and journalist of the summits; 1950: Annapurna, 8,091 meters of fame for Herzog and resentment for Lachenal; Jacques Balmat, Mr. Mont Blanc; Henriette d’Angeville, “the bride of Mont Blanc”

Between two expeditions, Fanny Bullock Workman gives conferences and the press does not have enough strong words to express all the admiration she arouses. Articles that also describe the life of the couple, who entrusted the education of their children to nurses. The French Republic of November 13, 1904: “Paris will receive today Sunday the visit of an explorer who is not cold in the eyes. It is an American, Mrs. Fanny Bullock Workman, well known in the New World, where her exploits caused a sensation. ” The morning, of November 22, 1904: “A valiant American explorer, Mrs. Fanny Bullock Workman, told herself, last night, in one of the amphitheatres of the Sorbonne, her ascents in the Himalayas. […] In the company of her husband because Mrs. Bullock-Workmann travels with her husband, a doctor of medicine who preferred to the practice of his art the fascinating chances of an explorer’s life, she went to the foot of the Himalayas and swore to herself to to be the first woman who would climb the icy slopes of the giant Gaorisankar. She came to us the other day, after spending two years on the border with Turkestan, scaled seven peaks, crossed four snow passes, explored the Karakorum glaciers and climbed to an altitude of 7,132 meters. ”

“An endurance that very few men would be capable of”

La Petite Gironde of November 17, 1909: “That our poor European Mont Blanc therefore seems small when we leave a conference of the famous American qui now holds the world record for women’s altitudes! What, indeed, count the 4,810 meters of the so-called giant of Europe and its hasty climbs, when for an hour and a half of clock this daring mountaineer described to you a long journey of exploration, starting at only 5,000? meters to rise to 7,100 meters, and makes pass before your eyes the most dazzling, the most prestigious photographic evocation of glaciers, seracs, snowfields, needles and peaks, many of which explored for the first time. ” Dawn of 14 May 1910: “Ms. Workman is known in the scientific world for her explorations in the Himalayas, the highest mountains in the world, which she has visited six times already. His great ascent was the summit of a virgin peak at 7,102 meters in the Nun Kun range. Following the desire expressed by some of her friends, Mrs. Workman, who is an officer of Public Instruction in France, booked the Femina Theater to give an illustrated lecture Tuesday afternoon, on Himalayanism – the latest in major sports. ”

The newspaper of December 5, 1913 also goes there in its eulogy: “The Geographical Society and the Alpine Club will welcome the most fervent, most intrepid woman mountaineer we know: Mrs. Fanny Bullock Workman, an American who, for seven years, has climbed with zeal, vigor, endurance, few men would be capable of the “vertiginous peaks” of the Himalayas. “ Daily life splits into an equally dizzying exercise in racist essentialization: “The constitution of the caravan is an infinitely delicate thing. It is impossible to have recourse only to the coolies. While the Kashmiris and Ladakhis are relatively courageous and loyal, nothing should be expected from the natives of Balistan. Do they perceive a plateau at the end of which rises a slope whose climbing does not tempt them, they throw themselves to the ground, uttering loud cries and making it understood that they would rather have their throats cut instead. than pushing forward. Prayers, threats, offers of money also remain in vain. So Mrs. Bullock Workman had to be accompanied, in her various ascents, by guides, whom she had recruited in the Alps and whose skill, courage, devotion were, on many occasions, a precious help to her. . “

The newspaper finally returns to the episode “the woman who wanted to be the tallest in the world instead of the tallest woman in the world”: “The intrepid traveler who deserves the honor of having visited regions where no one before her had ever set foot, rightly enjoys universal renown. Its successes have not been without arousing the jealousy of some of its rivals. One of them, Miss Annie Peck, did not claim to have climbed to the summit of Huascarán, in the Peruvian Andes, whose altitude is 7300 meters. Verification was needed. Mrs. Bullock Workman begged a Frenchman, Mr. de Larminat, whose knowledge was a sufficient guarantee, to go to the Andes mountain range. What he did. His calculations completed, he announced to the world that the peak reached by Mrs. Bullock Workman was 300 meters higher than that of Miss Annie Peck. Ms. Bullock Workman is therefore, scientifically, the mountaineering record holder. ”

To (re) readAll articles in the Retrosports section

The First World War marked the end of Fanny and William Bullock Workman’s travels. The one who has received numerous honorary distinctions from geographical societies or mountaineering, makes her celebrity fruitful through her conferences. Considered one of the most formidable climbers, men and women alike, of her time, she fell ill in 1917 and died in 1925 in Cannes at the age of 66. William survived him until 1937.

In Israel, legislative elections where Netanyahu plays against all the others

Russia: expulsion of diplomats from Germany, Poland and Sweden for supporting Navalny