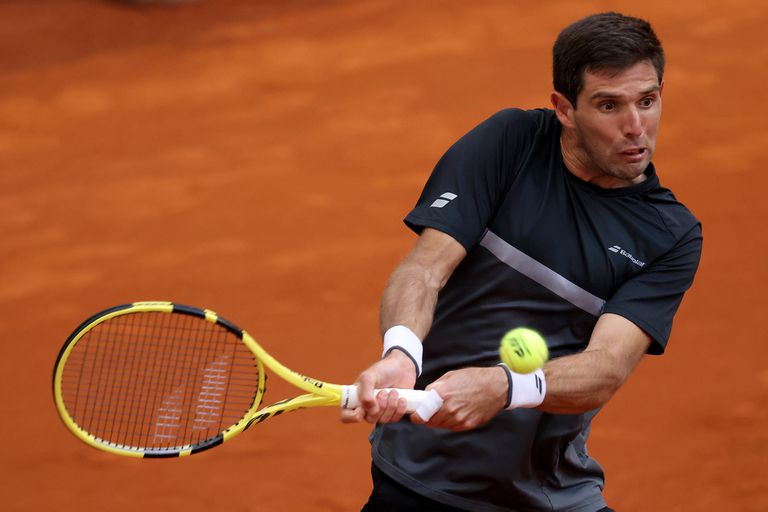 The Masters 1000 de Roma shows different faces to two of the heroes of the national title in the Davis Cup 2016: Federico Delbonis and Guido Pella. Since the circuit was resumed in August last year after five months of inactivity due to the pandemic, Pella (30 years old) has been finding it difficult to chain good news and feelings. Isolated by a (false) positive for Covid-19 from a member of his team, locked up for traveling on a flight carrying a person with the virus and weakened after catching coronavirus himself, The current 58th in the world is going through another traumatic event that is not allowing him to compete: a hip injury. Delbonis (30), likewise, enjoy a kind of second youth and advanced to the second round at the Foro Italico.

The bahiense he was in rome to participate in the Masters 1000 that takes place in the traditional Foro Italico, but he got off before appearing on the first wheel against the Hungarian Marton Fucsovic [NdR: en lugar del argentino entró, como Perdedor Afortunado, el japonés Yoshihito Nishioka, que ya cayó por 6-0 y 6-2].

Although it seemed that a right adductor injury was what had forced him Pella to retire in the middle of matches in his last two tournaments (in the first round in Madrid against Italian Jannik Sinner and in the round of 16 in Munich against John Millman), the discomfort is in the right hip.

Pella, trained by José Acasuso and Kevin Konfederak, will continue in Europe and, with different treatments, will try to recover moderately and get to participate in Roland Garros, from May 30. Based on how the discomfort progresses, he will study other alternatives.

Pella’s record in the ATP season is two wins (against Nishioka in the ATP Cup and against Egor Gerasimov in the first round in Munich) and seven losses.

Delbonis present it is totally opposite. Since the beginning of the European tour on brick dust and already accompanied by Mariano Hood as coach, the left-hander maintains a very good level: after falling in the second round of the ATP in Marbella, he passed the qualy at the Masters 1000 in Monte Carlo and reached the second round (he lost to Rafael Nadal), reached the quarterfinals at the ATP 250 in Belgrade, surpassed the classification at the Masters 1000 in Madrid and reached the round of 16, and won again in the qualifying stage in Rome . And this Monday, in his debut in the Roman main draw, he achieved a high-impact triumph: 3-6, 6-4 and 6-0 against Russian Karen Khachanov, current 24th in the ranking.

In two appearances in the main draw in Rome, Delbonis had failed to make it past debut. This Tuesday, for the second round, Belgian David Goffin awaits you, 13th of the tour (it will be in the fifth turn of the Nicola Pietrangeli stadium; the action begins at 5 in the morning of Argentina). The record is 1-0 in favor of the European, after the victory by 7-5, 7-6 (7-5) and 6-3 in the semifinals of the World Group of the Davis Cup 2015, in Brussels (indoors, on fast surface).

Diego Schwartzman, Eighth favorite in the Foro Italico and current 10th in the ranking (Italian Matteo Berrettini moved him from 9th), he will debut this Tuesday directly in the second round against Canadian Felix Auger-Alissime, 21st in the world. The match will be in Pietrangeli’s fourth turn.

Also in Rome, the rosarina Nadia Podoroska (44 ° of the WTA) will be presented this Tuesday: from 5 o’clock in our country, against the German Laura Siegemund (59 °).