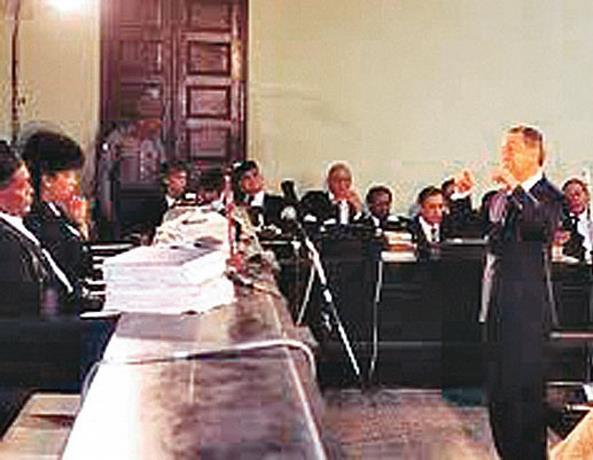 Over time, it is notorious how each incoming government passes the roll to bring to justice the alleged culprits of some acts of corruption committed in the institutions of the State, an action that becomes a scandal that fuels Dominican history.

For four decades the confusions of some illicit actions have haunted Dominican politicians in each administration from 1986 to date.

The government of Luis Abinader is no exception and early Sunday morning the attorney general’s office seized at least 9 former officials from the past administration of former president Danilo Medina through court orders.

The former officials belong to the Office of Supervisory Engineers of State Works (Oisoe), Patrimonial Fund of Reformed Companies (Fonper), Public Health (SP) and the Comptroller’s Office of the Dominican Republic.

The former vice president of Fonper, Carmen Magalys Medina Sánchez, the former director of Fonper, Fernando Rosa and Alexis Medina Sánchez were arrested by the attorney general’s office for allegedly being “privileged suppliers and front men who took advantage of family ties with political power to accumulate fortunes during the past period of government”.

The institution run by the former official Medina and the former director Rosa was created in 2001 in the Hipólito Mejía government with the aim of managing the benefits that the privatized entities shed in order to invest them “in the development of the country.”

However, seven years later, she has been in the public arena for several allegations of corruption, including the “sky-high salaries” that some employers earned during the administration of Danilo Medina’s sister, Carmen Magalys Medina Sánchez, one of the first detainees at dawn. from yesterday.

After Luis Abinader assumed power, he decided to eliminate the entity because he considered that the resources generated by the capitalized companies were used at the discretion of his council and the president generated innumerable cases of corruption.

The former director general of the Office of State Works Supervisory Engineers (Oisoe), Francisco Pagán; the former director of inspection of the same entity, Aquiles Cristopher and the engineer Máximo Suárez who also worked in it, are also among those arrested in raids.

This was created in 1986 with the objective of coordinating and supervising the construction of works carried out by the Dominican government under the immediate instruction of the Presidency of the Republic of turnpo.

However, the series of scandals and corruption cases came to an end on August 16 of this year by orders of the new government of Luis Abinader, which decided to immediately eliminate them.

This institution was in the public eye for several cases linked to corruption and also the prominent suicide of an architect contractor of the institution in 2015, burdened by debt. Some time later, some four people accused of extortion related to the case of the late David Rodríguez were sentenced to six and five years in prison.

Freddy Hidalgo, who was Minister of Public Health in the first term of Danilo Medina’s government, was also arrested.

He was dismissed for the death of eleven children at the Robert Reid Cabral hospital, after the special commission appointed to investigate the deaths of infants determined “deficiency in the quality of medical care” and the “difficulty in the central health care system. oxygen”.

History shows that from the government led by Salvador Jorge Blanco by the Dominican Revolutionary Party (PRD) in the period 1982-1986, through that of Joaquín Balaguer by the Partido Reformista Social Cristiano (PRSC) 1986-1996, Leonel Fernández by the Dominican Liberation Party (PLD) 1996-2000 and 2004-2012, Hipólito Mejía for the PRD 2000-2004, Danilo Medina from 2012-2020 to date, the country has been marked by at least seven major corruption scandals.

The judgment of the century

Jorge Blanco, 62, was sentenced to twenty years in prison for allegedly sponsoring irregular purchases in the Armed Forces.

In addition, he was sentenced to the payment of fines and compensation for more than 172 million pesos in favor of the State.

This case was called “The Trial of the Century” and along with Blanco were convicted of theft and crime: Leonel Almonte, the Secretary of the Armed Forces, Manuel Antonio Cuervo Gómez and Juan Tomás Peña Valentín, a supplier of the Armed Forces.

Also José Michelén, director of Inespre, and Fulgencio Espinal, administrator of the National Lottery. These last two fled the country to avoid subjugation

In the Joaquín Balaguer government, the Customs embezzlement scandal and the contract with the Canadian company Hidro-Quebec broke out.

This received complaints for overvaluation of the project exceeding 25 million dollars.

The company withdrew 20 million dollars that the Government had deposited as collateral in a New York Bank, however, there were no accused in court in the case.

Some time later, in 1995, the Director of Customs, Anisia Rissi, and 21 other people accused of embezzlement were brought to justice.

The case of the Eventual Minimum Employment Program (PEME) involved four PLD leaders and officials in the first government headed by Leonel Fernández (1996-2000).

This irregularity was brought to justice during the government of Hipólito Mejía (2000-2004) and lasted until the PLD returned to power in 2004, where the current president disinterested in the file.

In 2004, other corruption scandals were born during the PLD and the first on the list is Víctor Díaz Rúa, PLD Finance Secretary, former director of INAPA and former Minister of Public Works and currently one of the main defendants in the corruption case. Odebrecht.

This involved a group of 14 politicians who were officials of the government of former President Hipólito Mejía, who were accused of fraud against the State.

Also Blas Peralta, who was later sentenced to 30 years in prison for the murder of the former rector of the Autonomous University of Santo Domingo (UASD), Mateo Aquino Febrillet, as well as Antonio Reynoso (Father Toño), Freddy William, Alfredo Pulinario and Ángel Rondón .

In this they subjected four people, among them Colonel Carlos Piccini, after the Public Ministry of Brazil and the United States Department of State provided the Attorney General with evidence that revealed that senior executives of the Empresa Brasileira de Aeronáutica SA (Embraer) They gave sums of money to officials of the Dominican Republic to secure the contract for the sale of eight aircraft.

This encloses at least 11 Latin American countries including the Dominican Republic where there are 14 politicians who were accused by the Attorney General of different crimes.

In 2019, the Supreme Court of Justice initiated the trial against the six accused of receiving bribes for 92 million dollars from the Brazilian construction company Odebrecht in the country.

While designated legislators Tommy Galán, Julio César Valentín and Alfredo Pacheco, were imposed a bail of 5 million pesos and a ban on leaving the country.

In another accusation in 2014, Víctor Díaz Rúa was brought to justice accused of acts of corruption and money laundering during the exercise of his functions as Minister of Public Works, however, the Fourth Criminal Chamber of the National District ordered the file final of the criminal complaints against him.

Other corruption cases knocked on the doors of the Medical Insurance for Teachers (SEMMA) and the Metropolitan Office of Bus Services (OMSA), the latter uncovered as a result of the murder of the lawyer and university professor, Yúnior Ramírez.