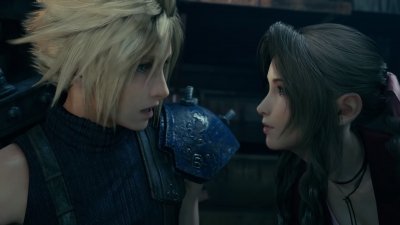 The year 2020 has for many players been marked by Final Fantasy VII Remake, currently released only on PS4 and whose temporary exclusivity will last until April 10. However, this is only the first part of this large-scale project aimed at recounting this great adventure that saw the light of day in 1997. The sequel is already in development, Tetsuya Nomura hoped moreover last summer get it out as quickly as possible. It will undoubtedly be necessary to wait a while before having anything concrete about it, but the CEDEC + Kyushu 2020 Online which is held this weekend gave rise to a speech by Yoshinori Kitase and Naoki Hamaguchi, during which this FFVII Remake Part 2 was mentioned, all with Akihiro Hino from Level-5 as master of ceremonies.

This is through the English translation of @aitaikimochi that we learn without too much surprise that the team wishes achieve the same tour de force as with Midgar, but for the whole original world of FFVII, in terms of experience for players. Once again, the aim is also togo beyond player expectations already knowing the outline of the original plot. We can also expect improved combat system, the team members having particularly liked the orientation towards the action taken by the combat.

Hamaguchi : When creating FFVIIR, we decided that the whole game would take place in Midgar and we created a realistic world within Midgar. For example, in the original game, you didn’t really have an idea of ​​what it would be like to watch the set from a slum perspective, but we were able to visualize that in the remake. In Part 2, we want to take that type of detail and allow users to experience the rest of the world the same way they experienced it with Midgar in the remake.

Hino (MC) : You mean the world outside of Midgar, aren’t you?

Hamaguchi : That’s right. Sadly, that’s all I can reveal about Part 2 at the moment.

Kitase : Those who played the original game probably know what happens in the story, and are curious about what will happen next. However, because they know the story, it gives us the opportunity to deliver something to them that they expect that makes them think “oh so that’s what really happened”, but also Show them something that not only surprises, but also goes beyond their expectations. Because we already have the original game, if we can express these elements well, it can become something that users can certainly look forward to! We did that in Part 1. For those who have played Part 1, they already have an idea of ​​what kind of game we are making. We want to create a game that lives up to their expectations, but also breaks free, in a good way.

Hino : In Final Fantasy XIII much of the map consisted of a defined path, but during the second half of the game it opens up to a large map. I really enjoyed that aspect, and hope something like this happens for Part 2.

Hamaguchi : While I can’t really speak to the details of Part 2, there has been an interesting change internally among the team. When we created Part 1, most of the staff who wanted to join our team were fans of the original game. However, right now the new staff who want to work on the game are the ones who have played the remake and would like to participate specifically in Part 2. It’s cool to see this new wave of staff.

Hino : For those who like the original game, do they have any specific thoughts on development?

Hino : So maybe the ideas of this staff could help evolve the action combat system?

Hamaguchi : They certainly bring different ideas which allow us, hopefully, to also create new surprises for the combat system!

Moreover, during another passage from this discussion, Naoki Hamaguchi mentioned that the original game is very long and thatthey will have to add elements to upcoming events to portray them realistically, like what was done in the first part. We still don’t know how many parts this massive project will have, so anything is possible at this point.

What is certain is that Square Enix has recently registered several brands related to the universe of FFVII, first in Japan then in the rest of the world, whose titles could have a connection with part 2 of the remake.

While waiting for this sequel, this gives you ample time to discover Final Fantasy VII Remake if it is not done yet, Amazon currently selling it € 39.35.