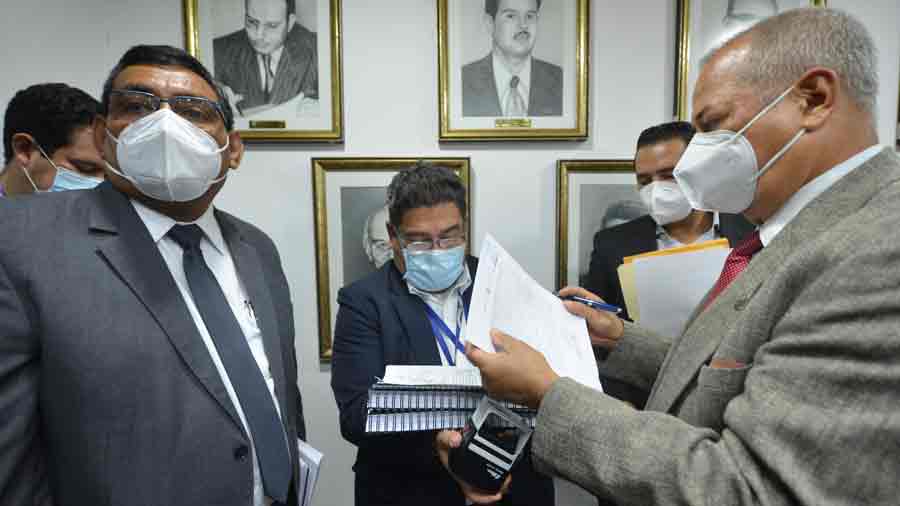 The head of the Treasury, Alejandro Zelaya, announced next year’s budget project to the Legislative Branch, which amounts to $ 7,453 million with a fiscal deficit of $ 1,342 million.

The Government presented yesterday a project of the General Budget of the Nation for fiscal year 2021 for $ 7,453.5 million, with an increase of $ 1,027.4 million compared to the budget approved for 2020.

At a time when the economy has entered a recession due to the economic paralysis in which thousands of companies have closed and there are at least 85,000 layoffs, the project presents optimistic collection figures. It projects tax revenues of $ 5,169.9 million and of them, $ 2,643.4 million only in Value Added Tax (VAT) and $ 2,061.2 in Income Taxes.

We recommend: Government of Bukele presents budget for 2021 with a deficit of $ 2,306 million

According to the minister, the deficit is only $ 1,342.5 million. “For those who are thinking that this budget contains an exorbitant debt or financing gap, they were wrong; We inherited a gap of $ 1.2 billion in the administration of President Bukele for the year 2019, that was the deficit. For this year, the gap has been estimated at $ 1,342.5 million, ”the official reported.

However, economists already warn that they need more information about these data presented by the official since they affirm that the shortage is much greater, even beyond $ 2,000 million.

But there are institutions like the Ministry of Housing that last year had a budget allocation of $ 12.5 million, but now has proposed a budget of $ 60.4 million, with an increase of 383.5%.
For his part, the president of the Assembly, Mario Ponce, pointed out that from the increase proposed by the Treasury, the respective commission will begin the analysis to determine its approval.

“There is a variation between the 2020 budget and the 2021 budget of $ 1,030 million, based on the fact that the previous budget was $ 6,426.1 million. That is the increase that the budget brings. We are going to enter the debate to
reviewing where the efforts of the Executive are directed to be able to energize the different areas of the country’s economy ”, said the president of the Legislative Organ.

When consulting Zelaya where the money from the budget increase will come from, he said that “in every crisis there is a rebound effect.

You could read: Budget 2021 will have a high deficit and high debt to pay, say economists

We are estimating a rebound effect at the VAT level, not with income. We are placing this (economic) recovery of 4.8% of nominal GDP, we believe that the calculations and estimates we have made with parameters
adequate, ”Zelaya said.

More seats
Although the Government had said that no more positions would be opened in the new budget, Zelaya said that they will hire 120 doctors, and 380 emergency medical technicians, more than 380 assistants to complete the equipment
82 ambulance technicians; He also said that they will incorporate 1,209 places of the Plazas para Todos program; He also mentioned 290 new resident positions.

See Also:  Morales Party: The Comeback of the Socialists in Bolivia

As for the National Civil Police, he assured that they included a salary increase for each of the police elements.

Regarding war veterans, he said that $ 92.6 million has been included for 77,203 beneficiaries, in addition to scholarships for their children.

Economists say
After knowing the first data of the spending plan, the economist Carmen Aída Lazo said that the budget immediately reflects an increase of 16%, but for her the most important thing is the financing gap.
“We are talking about a financing gap, as we understand it is about $ 2,140 million, this is 8.5% of GDP. With that forecast, the debt was estimated to be 90% of GDP. Now the debt would come to
be almost 100% ”, highlighted the professional. This means that the State will have to allocate more resources to pay the debt service (annual amortization). “The main question that Salvadorans must ask themselves is: What are the sources of financing that they have identified to close this gap? How much will you play
to the country to get that financing? ”, he pointed out.

He added that “the proposed proposal must be studied in detail, given that we are in a fragile fiscal situation and therefore we must be cautious in being able to evaluate the quality of spending that is contemplated in that preliminary draft budget,” he said. Tie.

For the economist of the National Development Foundation (Funde), Romel Rodríguez, the budget figures and the collection projection do not make sense and require further analysis and study.

“We are talking about the fact that the fiscal deficit would be very high, in fact the budget it presents is higher by about $ 1,000 million (compared to 2020). A plan of income and expenses has been made and it has not been put into
considering the macroeconomic environment that is going to be experienced next year, with a slow recovery, ”said Rodríguez.

He welcomes the improvement of spending for Education and Health, but if it is to maintain fiscal sustainability, it must cut unnecessary spending, he added.

During the visit to the Legislative Assembly, a group of workers from the institution complained to the Minister of Finance for not transferring funds to pay their salaries. Video EDH / Jessica Guzmán.