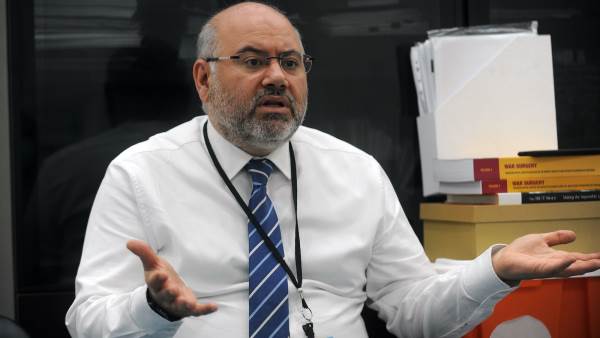 The current crisis is no longer confined to one hospital alone. It is very generic and large. When the support provided by the Banque du Liban was 85 percent, private hospitals raised their prices by the equivalent of 15 percent on the basis of the market exchange rate, and the burdens on the patient increased. But now the companies are demanding to pay the price of the supplies one hundred percent. Therefore, no hospital is able to operate, especially since the tariff is still the same. Of course, some hospitals burden the patient in an illogical and unethical way, and take advantage of the chaos. There are hospitals that are trying to collect the difference they incur so that they do not go bankrupt and close their doors. But the patient cannot bear this burden under difficult conditions.

The hospital sector is in a major crisis. This week will be crucial. If solutions are not developed for medical supplies, we will be facing a major disaster. Hospitals cannot store supplies, and companies will not deliver without subsidies except at the market price. In the event that no solutions are developed for the requirements, hospitals will reach the conclusion that there is no support, and will raise their prices according to market cost. The patient will be faced with one of two solutions, either not being treated or paying all the costs.

With regard to Hariri Hospital, like others, we will work with the current stockpile. Everyone should realize the seriousness of the situation, as no hospital has enough for a month.

Al-Hariri Hospital became famous after the outbreak of the Corona crisis, and received many aid and equipment. How did this hospital develop, where was it and where did it become?

The Corona crisis showed the work that the hospital had started in 2015, when the reform and rehabilitation plan began, not only at the level of equipment, but also administratively and financially to ensure the adequacy of workers and suppliers and to secure income that lifted it from the financial deficit. International institutions supported the hospital with the Syrian displacement crisis with small projects, which began to expand due to the great confidence in work and management. The annual deficit at that time was about $18 million for an institution with an annual budget of about 28 billion pounds. The deficit fell to one million dollars, with the onset of the economic crisis and the outbreak of the October 17 uprising. When the Corona crisis erupted, the hospital showed its readiness, while private hospitals refused for several reasons, considering that confrontation is the responsibility of the state. When the first case was discovered in Lebanon, the hospital received it, and we informed those concerned that the hospital could confront and prepare for three weeks, during which we opened a section to receive patients and rooms for intensive care. For the first two months, we were the only ones receiving patients. Trust and action made the donor institutions raise their support and the Lebanese people as well, through the donations that still come daily… from the poor.

We dealt with Corona with a very high professionalism, so that the first Corona infection among workers occurred about three months later, at a time when injuries were occurring among medical and nursing staff in all hospitals.

And we used international aid to ease the burden on the sick. He challenged any other hospital, even the government, that received less fees from a patient than Hariri. While private hospitals began demanding tens of millions of fees from patients, the rate that a patient in Hariri would bear was about 70,000 Syrian pounds for the entire length of stay.

Practically, there are currently two hospitals in one. Are there intentions to close the Corona department in light of the decline in injuries and the number of patients?
Currently, we have two hospitals in one. An entire building with its own entrance dedicated to Corona, fully equipped with all necessities, a care room, operating rooms, x-rays, dialysis, and a section for children, childbirth and newborns. It is true that we have less than ten corona patients currently, but we have maintained the capacity the same. Corona is not over yet, and we must remain prepared. In Britain, for example, where the rates of vaccination with two doses exceed forty-five percent, infections have risen again. The rate of vaccination in Lebanon with two doses is still five percent, and this calls for expediting the distribution of vaccines, raising their number to centers and benefiting from their ability to avoid the spread of the Indian and other mutant. Therefore, we will keep the Corona department in the hospital as it is, even if it becomes empty of patients in the coming days.

As for the other section of the hospital, it has all the equipment. He assumes great responsibilities in the health care of patients who are unable to bear the burdens of private hospitals. He had asked us to transfer the whole hospital to Corona at the beginning of the crisis, and we refused. Because such a decision will deprive hospital patients of medicine. And we were directly shown the correctness of the decision, because the categories that go to the hospital have expanded greatly, and the ordinary emergency department testifies to this matter, because private hospitals require huge numbers that the citizen cannot bear under difficult economic conditions.

I talked about the reforms that I have undertaken, and the confidence of international institutions in the administration and the hospital. And you have experience with the details of what goes on behind the scenes in hospitals. And put your name to take over the Ministry of Health. Do you have an idea of ​​the nature of the solution to the current health crisis that you warn of?

This is a very big question. No one can solve the current crisis individually. We must place no hope in a person, but rather in reform programs and how realistic they are. The current problem is not with the Ministry of Health, but rather we suffer from a comprehensive national crisis.

The problem of waste and corruption exists in medical supplies, in medicines that are smuggled abroad, and in hospitals that take advantage of circumstances to achieve illegal profits, and at the expense of health security for all citizens. At the level of the Ministry of Health, the current crisis must be approached and reasonable solutions should be found, and hospitals should not be left to manage their affairs on their own or on their own.

At the level of the current health crisis, everyone must work as a team to get out of it, hospitals, suppliers, guarantors, and even patients. And the attempt by any party to exploit the other and gain at its expense leads to the current chaos. In other words, there must be collective responsibility. This applies to the work of state institutions. Citizens must be frank about everything. We suffer from a lack of clarity: the Banque du Liban supports the requirements or does not support them? He must be clear about his intentions to the Lebanese.

The Lebanese should stop thinking that donors are waiting for us to support us. The latter is watching closely and wants to know every detail, and when we work well and we are reliable they support us. This is what I learned in the hospital experience through donor support. Before requesting aid, time, energies and resources must be managed, and in accordance with waste and corruption. As for bringing in more loans and aid to cover waste and corruption, it is no longer valid.