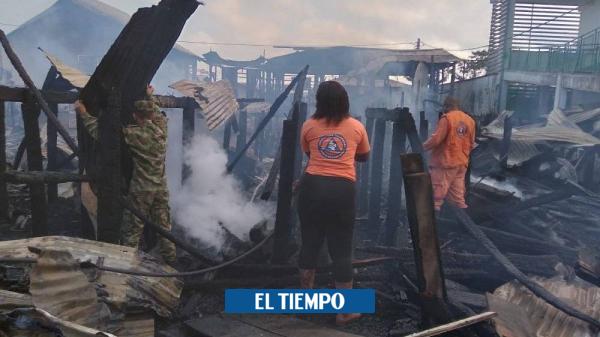 Around 73 homes burned and two dead is the balance that, so far, leaves the strong fire that happened at dawn this Sunday in Riosucio, Chocó.

“At about 3 in the morning we managed to put out the fire, thank God and the community that helped with pumps and buckets. The National Police and the Army also collaborated with us, ”explained Conrad Valoyes Mendoza, mayor of the municipality.

(You may be interested in: The Medellín metro reaches 25 and continues to grow)

Due to the conflagration there are already about 350 people affected. Some of them are looking for a shelter or they are relocating, according to Valoyes.

“We are currently in the process of investigation to determine the causes of this conflagration and presumably it is said that it was a pole, where there was a short circuit ”, explained the president, who is waiting for the arrival of aid from the National Government.

(You can also read: Shocking moment: car ran over 2 cyclists on the Antioquia road)

This is how Riosucio, Chocó, was left after the fire that left 73 houses burned and two dead. Solidarity with the Chocoano people. 📹: Seventh Army Division. pic.twitter.com/G2HDCRGBLW

On the other hand, Major General Juan Carlos Rodríguez, commander of the Army’s Seventh Division, announced that He sent a platoon of engineers to the municipality to begin rebuilding houses. “We also sent a tank car to deliver water to victims,” ​​he said.

(We suggest you read: Life smiles in the United States for the ‘angel child’ of Chapecoense)

For now, work to remove rubble and recover some belongings in the affected homes continues. While the National Unit for Disaster Risk Management announced that a delegation from the National Government, At the head of the deputy director of Disaster Management of the UNGRD, he goes to the municipality to carry out attention tasks.

The mayor of the municipality requested the help of the authorities due to the magnitude of the fire.

The first to alert about the emergency through social networks was Mayor Conrad Valoyes: “I want to call on the National Government to help us, please, my people are ending! Let them help us with helicopters, because we have several pumps working, but they are not enough. Riosucio now requires helicopters to quell this great emergency that exists. “

The intensity of the flames was recorded in several videos that circulated on Twitter and that reflected the moments of anguish of the residents.