If you want to develop an application that will touch both web, mobile and desktop platforms, there are several options available to you. As a first step, you can develop a native application for each platform, which will allow the application to take advantage of the resources specific to each platform, but will have the disadvantage of being more demanding in terms of maintenance for each system. It is also possible to use cross-platform tools to code the application once and deploy it on multiple platforms. The risk in this case is that for the most part, it will not work natively on systems, but will rely on tools to function, which could have an impact on its performance not to mention the fact that it might not even be able to efficiently use all of them. the resources of each system. On the other hand, the advantage with such a step is to be able to maintain it easily. A third option offered is to develop a web application and include an option to install it on mobile and desktop systems as progressive web applications (or Progressive Web App in English abbreviated PWA).

The term progressive web applications is understood to mean web applications that use APIs and browser functionality to provide a native user experience to cross-platform web applications. To make it available to users, the PWA must at least be delivered securely (HTTPS), use one or more service workers, and have a web application manifest. Once the PWA is available, the user can install it on their mobile device or their computer in order to use it in a window without an address bar like a native application. However, designing a PWA does not mean that it will be available for installation in all browsers on all platforms. This is because if a browser does not support PWAs, the installation option will not be available in the browser.

For several years, Chrome has supported PWAs in its browser. Edge does the same. On Android, Firefox also supports PWAs. But for computers, Firefox has implemented a functionality similar to PWAs called site-specific browsers (abbreviated SSB). Once activated and running, SSB allows websites to run in their own windows, like a desktop application without an address bar, navigation buttons, or other clutter. This feature, which never made it past the stable version, has long been hidden in the bowels of the browser. To activate it, you need to do the following: 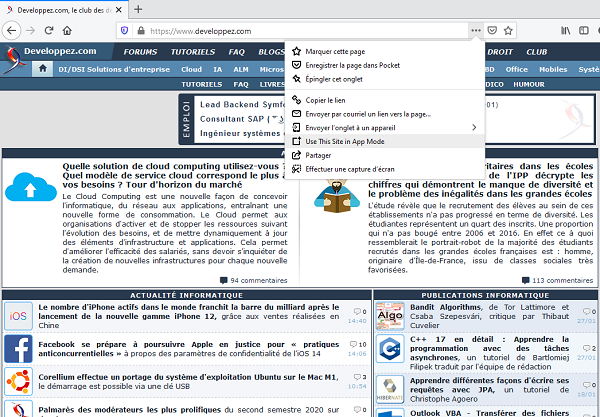 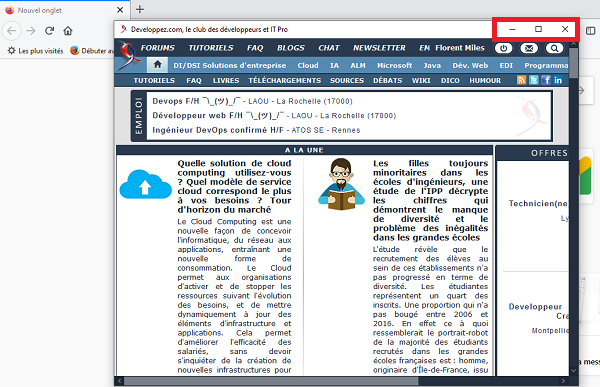 But for the past two months or so, the maintainers of the Firefox browser have announced that they will remove SSB from Firefox 86. For reasons, Mozilla technicians argue that the feature has multiple known bugs and is time consuming in terms of sorting out bugs. They add that this feature has never been available except through a hidden prefix and also argue that user research has revealed little or no perceived benefit for the feature. For all of these reasons, the Firefox development team has decided not to continue developing this feature. As well as the maintainers could have simply made the feature obsolete, they decided to remove it entirely so that it would not send a bad signal that this is a supported feature, if it remained present in Firefox.

If the developers of Firefox seem convinced of the choice of this decision, it is not the same for many users who call the foundation to review this decision. For many users, whatever name you might give it (Fake App, PWA, SSB), the fact that this feature is missing in Firefox could turn off more than one user. Other users question the studies which showed that users did not perceive any advantage over this feature and which led to the adoption of this decision. For still others, it is rather removing this feature that returns the wrong signal. They add that it would be more interesting to spend a little time to perfect the functionality and make it available in a stable version in Firefox than to remove it entirely. Regarding the latter proposal, the Firefox team explained that even if someone were to voluntarily come up with a patch that complements the implementation of SSB functionality, Firefox maintainers would have to devote resources to reviewing it and this would also incur ongoing maintenance costs. Also, with limited resources, the team declares that it cannot afford to spend them on tasks that seem to have less impact on its mission. And to add to the grief of users wanting to use this feature, Dave Townsend, Firefox software engineer, says there are currently no plans for PWA support in Firefox. In view of this decision, many users are considering keeping or switching to Chrome / Edge because of the lack of this feature. Until then, SSB is still supported in Firefox 85.

What do you think about removing SSB from Firefox? Good or bad decision?

Do you think this decision will have a significant impact on Firefox market share?

By refusing to support Progressive Web Apps, Apple would be damaging the future of the Web, according to an engineer

Microsoft is said to have turned Outlook into a progressive web app, allowing Outlook.com to be installed in Windows, macOS, and other platforms as an app

Apple refuses to publish Microsoft’s xCloud gaming app on iOS, citing violations of its policies, Microsoft plans to go online by offering the service on Safari in 2021