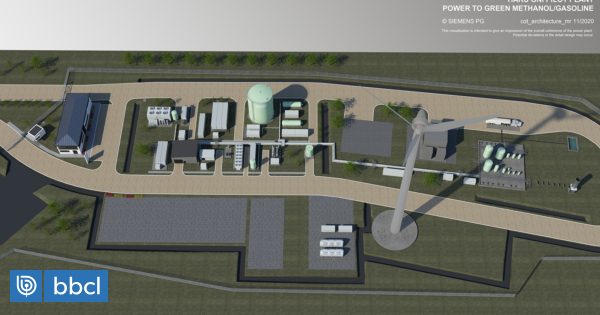 HIF (Highly Innovative Fuels), the first eFuel project to be developed in Chile, continues to advance with its partners in the initiative: AME, Enap, Enel Green Power, Porsche and Siemens Energy announced today the financial support from the German government for the pilot plant, through Siemens Energy.

The project, the largest of its kind in Latin America and one of the first in the world, will use renewable energy and carbon dioxide captured from the atmosphere to produce 350 tons of methanol per year and 130,000 liters of eFuel as of 2022.

The project contemplates an initial investment of US $ 38 million.

In later commercial stages, planned for 2024 and 2026, capacity will be increased to about 55 million liters per year and 550 million liters of eFuels per year, respectively.

“We firmly believe that this project will help change the world by providing a solution to combat climate change in the short term. With the winds blowing in the Magallanes region, combined with cutting edge technologies, HIF is a breakthrough for decarbonize transportation, allowing today’s vehicles to be moved with new and clean fuel, giving Chile the opportunity to export its energy to the world ”, highlighted César Norton, president of AME, the company that owns the project and is in charge of leading its development.

“For this initiative, we have brought together world-class suppliers and partners from around the world who will contribute their expertise,” he added.

HIF will draw on the expertise of leading-edge technology providers and vendors around the world. Global Thermostat will supply the equipment for the extraction of carbon dioxide directly from the air, through its specialized “direct air capture” technology. The methanol production process will be based on a Johnson Matthey design, and will be converted to gasoline using technology licensed from ExxonMobil.

The engineering and construction services for the methanol-to-eFuel plant will be provided by the Chinese company Sinopec Engineering (Group) Ltd. BCI bank will have a financing line with respect to VAT.

The process consists of use renewable energy to obtain green hydrogen from water through a process called electrolysis. Hydrogen then combines with carbon dioxide drawn from the atmosphere to produce methanol and some of it in gasoline.

The use of this gasoline in conventional vehicles is one of several solutions – including electrification – to reduce carbon emissions from the transport sector.