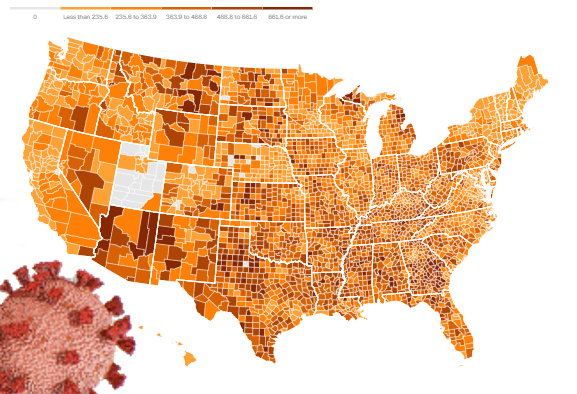 (CNN Spanish) — A million empty chairs around the dining room tables: That image was used by President Joe Biden. when the United States Government confirmed that the country had passed the grim milestone of more than one million deaths from covid-19. Why was this figure reached? And who are the most affected? Here, five keys to understanding the data.

Since the start of the pandemicMore than three out of every 1,000 people in the United States have died from covid-19. However, this statistic does not show a key to understanding the dimensions of the problem: the impact of the deadly virus has been uneven.

The states with the most deaths

California is the state in which the most deaths have been recorded in absolute terms, according to information from Johns Hopkins University updated as of May 18 at 12:00 pm Miami time. The figure rises to 90,887. This list is followed by Texas with 88,236 deaths and Florida with 74,241. Fourth and fifth places are occupied by New York (68,699) and Pennsylvania (44,814).

(California, Texas, Florida and New York are also the four states with the most recorded Covid-19 cases. Fifth on the list in this case is Illinois, while Pennsylvania is sixth.)

At the other end of the table are Vermont, where 654 deaths have been recorded, and Alaska, where deaths have risen to 1,268 since the pandemic began.

On the map below, you can see the counties with the most and least deaths per 100,000 population.

More men than women have died from covid-19: they represent 55.1% of the deceased, against 44.8% of women, according to statistics from the Centers for Disease Control and Prevention (CDC). English).

Among women, deaths have risen to 446,688. Taking into account the age groups, however, the most affected was that of 85 years and older, where the figure rises to more than 143,000 deaths.

The statistic is reversed if the cases are analyzed: in this variable, women represent 53.2% of the total.

More than 1,500 children have died from covid-19 in the country to date, CDC statistics reveal.

That number can be broken down by age: A total of 491 children ages zero to four died from the virus, the most according to the age categories managed by the CDC. Among children aged 5 to 11 years the figure rises to 360, among those aged 12 to 15 they total 381 and, finally, a total of 310 adolescents aged 16 and 17 died from the virus.

Protection measures for children continue to be updated: this week, the US Food and Drug Administration (FDA) granted an authorization of emergency use so that children between 5 and 11 years of age receive a booster of the Pfizer/BioNTech covid-19 vaccine, at least five months after completing the first vaccination schedule.

Pfizer applied for this emergency use authorization in late April, citing company data that showed a third dose of the vaccine increased antibodies against the omicron variant 36-fold in this age group.

Deaths among Hispanics and Latinos

Hispanics were the group with the most deaths after non-Hispanic whites. In this community, the number of deceased amounts to 124,373, according to data from the CDC.

The third most affected group is that of black people, where almost 98,009 deaths have been recorded.

Various studies have confirmed that the pandemic hits minority groups such as Hispanics, blacks and natives more than white people. Research published in October 2021, for example, showed how people in these groups were more likely to die from all causes. (covid-19 and others) than whites and Asians.

Data Johns Hopkins shared with CNN in September 2021 revealed that the black and Hispanic population tended to undergo less testing and vaccination.

4 great reasons that explain the figures

Mortality rates are influenced by multiple variables that may be associated with the lethality of the virus, the characteristics of the population, and the capabilities of the health system.

In a recent analysisDr. Elmer Huerta, Public Health specialist and contributor to CNN en Español, mentioned four main reasons that may explain why the United States has reached this grim milestone: the high rates of obesity and chronic diseases in the US population, the collapse of the health system, a high proportion of the population of older adults (about three-quarters of all deaths from covid-19 have occurred in this age group and, overall, about 12 out of every 1,000 older people in the United States have died from the virus) and the rejection of vaccination by citizens.

In this regard, a recent analysis by the Kaiser Foundation calculates that at least 234,000 deaths from covid-19 between June 2021 and March 2022 throughout the country could have been prevented with vaccines.

With information from Amanda Sealy, Nikki Carvajal, and Elmer Huerta.