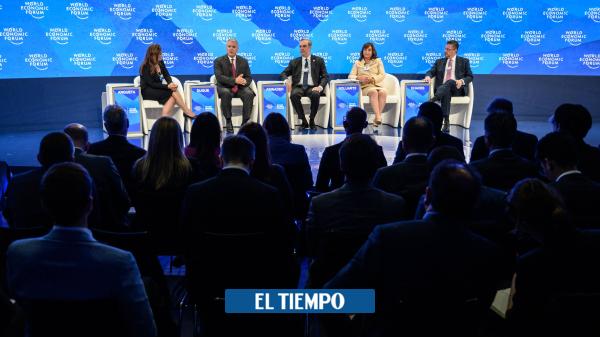 The program announced that the farewell lunch would begin at one in the afternoon on Thursday the 26th. However, defying Swiss punctuality, from 12 o’clock the guests began to arrive at the Schatzalp, the hotel that dominates the landscape of Davos on top of a mountain and to which it is necessary to arrive by cable car.

(You can also read: Economic Forum in Davos: more questions than answers)

“We all have an urge to de-stress a bit,” said a Norwegian executive living in Zurich, while waiting for the doors to open, something that ended up happening twenty minutes earlier than expected. For the good of the attendees, the sun that had been absent all week shone brightly and the cool breeze of spring gave a celebratory character to the end of an event whose tone was mostly somber.

And it is that throughout the week the 2,500 attendees at the World Economic Forum heard talk of upward risks, increased by the war in Ukraine. The festive mood associated with the reunion of old acquaintances and new contacts, after two and a half years of pause imposed by the pandemic, would end up cooling due to circumstances.

But beyond the mood at that point in the Alps, it is worth reviewing the main messages that emerged from the meeting of an important part of the global elite. These are the ones that transcend, once the barricades that protected the safety of fifty heads of state and government, as well as the leaders of multinational companies, were dismantled on Friday, already back at their respective headquarters.

1. The world is and will be different

It sounds like a catchphrase, but this time it’s true. Although international tensions have always been present, the order given by Vladimir Putin to invade Ukrainian territory on February 24 changes the course of the planet, as its effects will be felt for decades.

Although it is still too early to venture conclusions as the harsh military confrontation continues, everything points to a deep rift between Moscow and Western capitals. As a consequence, the largest nation on the planet will see limited access to foreign exchange, technology and trade, among others.

Obviously Russia and China will further strengthen their ties. Given the tensions that already existed between Washington and Beijing, everything points to the formation of two antagonistic blocs, which will remind more than one of them of the Cold War era. However, now the ideological differences will weigh less and the geostrategy to add followers to one field or another will weigh more.

The first victim of this new reality is the globalization that emerged after the fall of the Berlin Wall, the same one that served to reach the most diverse markets and build global value chains based on efficiency. Although trade will continue to record good figures, over time numerous factories with their suppliers will be located near the main consumption centers, since the criterion of certainty in dispatch will weigh more than cost.

Of course, in terms of communications or entertainment, the world will remain almost as globalized as ever. But in other fields, such as industry, regionalization will be more noticeable.

At the same time, security concerns are on the rise. In Europe, a true military career has already begun between the members of the North Atlantic Alliance, aimed at dissuading Russia from any other armed adventure, while the United States does the same.

A lot of water will pass under the bridges before trust can be rebuilt. Although there is no evil that lasts a hundred years, in the best of cases it will take a few decades, with which the global divisions will be more noticeable and the conflicts with the participation of one and the other possibly more common.

Since the collapse of the Soviet Union 30 years ago, the private sector had taken the lead in running the planet. ‘Make money not war’ had become the informal motto of those attending the Economic Forum. Now that the war is back, power returns to politicians and generals, while uncertainty is once again the norm.

2. The economy is in trouble

When Kristalina Georgieva was asked by a talk moderator last Monday in the plenary hall of the Davos convention center if the world was close to a recession, the International Monetary Fund’s managing director’s response was a resounding “no.” ”. The Bulgarian economist recalled that, although growth in 2022 will be one percentage point lower than the entity in charge thought in January, the expansion of global gross domestic product will still be around 3.6 percent.

However, during the course of the conversation, the warning signs became evident. To begin with, 143 of the 190 countries that make up the IMF have slowed down, and some face very serious challenges that would make a contraction inevitable.

The combination of high prices of primary goods, high inflation and rising interest rates makes up a cocktail that for dozens of nations may be impossible to digest. Anyone who has to import hydrocarbons or food and has taken on more debt to mitigate the impact of the pandemic faces a reserved prognosis.

There is always the possibility that the right mix of policies will lead to what specialists know as a soft landing. In that scenario, the increase in the cost of money would moderate demand, with which things would stop rising so fast and everything would gradually return to normal.

Unfortunately, in reality things are not so simple. Although initially slow to react by the US Federal Reserve Bank and Europeans are likely to bring the famine under control, the tail end could be devastating for places in the southern hemisphere that are not net commodity exporters.

And such a prospect could not only fuel a vicious cycle of low growth, but would cause enormous social and political turbulence, as well as new migration pressures. To make matters worse, a further deterioration caused by the war in Ukraine or a possible encounter with China would worsen the balance. For this reason, although it is not possible to speak of a world recession, the probability that it appears is on the rise.

To receive the accreditation that allowed entry to certain strictly guarded hotels and the congress area, each registered person had to previously present a PCR or antigen test, with a negative result for covid-19. Immediately afterwards, with the credential in hand, a second test was essential, which, if positive, invalidated access.

The strict measures adopted were a reminder that the pandemic is still around. And that was what the heads of companies such as Pfizer and Moderna underlined when they stated that the mutations of the virus continue and with these the eventual appearance of a strain resistant to vaccines that will once again trigger the numbers of infections and deaths.

Consequently, there is no other option but to correct the imbalance that persists. While in Europe or Latin America, the coverage of inoculations is high, in Africa or parts of Asia it is still very low, with places where it still does not reach 20 percent of the respective population.

Hence, the commitments in the sense of granting patents at zero cost and developing production facilities have deserved applause. But from saying to doing there is a long way.

No less urgent is the hunger crisis. According to the United Nations, at the end of 2021 there were already 273 million people at serious risk of starvation and the war in Ukraine – which limits the supply of cereals – increases that number by at least 50 million more, according to David Beasley , director of the World Food Program.

As if that were not enough, the shortage of fertilizers will affect crop yields. In this way, what today is a problem of access to food, determined by the increase in prices, can become a problem of availability, which consists in the fact that there would not be enough to feed all the inhabitants of the planet.

For this reason, the alarms are at their peak. There are experts who predict that this circumstance will cause more deaths than those left by the war in Ukraine. Russian bombs kill many innocents, but starvation is even more deadly.

The invitation was open to anyone who wanted to put the virtual reality device on their heads. Once placed, the user could attend a fictional Davos in the metaverse, complete with alpine scenery. In this way, in a few years whoever wants to stay in his house, but participate in the Economic Forum, could be present while being physically absent.

This experience is just one example that the advancement of technology continues its march, hand in hand with cloud computing, the Internet of things, algorithms, robotization, 3D printing or data analysis. The so-called fourth industrial revolution does not stop, beyond the fact that it has unleashed evils such as cybercrime, which does not stop growing either.

Even though its implications are broad and touch almost all aspects of daily life, the debates in Davos revolved above all around the labor market, beginning with the professions and trades that will increasingly fall into disuse. Contrary to popular belief, the net balance in employment should be positive, but that requires training a huge proportion of the labor force to fill the vacancies that will open up.

For this reason, there is talk of training a billion people, a huge figure that requires the design of adequate programs in all countries. For the youngest, the challenge is great, but for middle-aged or older individuals it is enormous, because in more than one case it will require starting from scratch.

5. And global warming, there

In mid-May, a new report indicated that the last seven years have been the period with the highest temperatures on the planet, since when there are statistics. The alert call confirms that climate change continues its march, becoming the great threat for billions of people, whether they live in coastal areas or not.

Talking about a remedy is easy. Scientists have pointed out that it is essential to limit the discharge of greenhouse gases into the atmosphere, so that eventually what enters is equal to what leaves and achieve the desired neutrality.

But the difficult part is that this forces us to change the power generation matrix, based on fossil fuels. The war in Ukraine makes the required transformation process even more complex, as more than one country is determined to seek alternative sources to replace Russian oil and gas.

In the meantime, initiatives such as those to protect – for a fee – the carbon-absorbing forests in the Amazon are only in an embryonic stage. Put another way, citizens want a green and sustainable future, but it is not what, but how that is to be seen.

This being the case, it is easy to understand why the atmosphere in Davos was impregnated with concerns. Seven months from now, when the Economic Forum returns to its usual schedule in the dead of winter, the above issues and many more will be revisited, but few expect significant progress.

As the question marks mount, it is valid to ask if Colombia is paying attention to what is happening beyond its borders. Clearly now there are more risks, as well as more opportunities. In the midst of the race for the Presidency of the Republic, the question is whether voters will know how to choose the most suitable person to face a global scenario that is even more challenging than that of the recent past.

Sad details.. The secrets and mysteries of what Hassan Al-Raddad did… by vanquishing his wife Amy Samir Ghanem… and exposing her sister Donia in front of the artist Mervat Amin made her very sad.! !