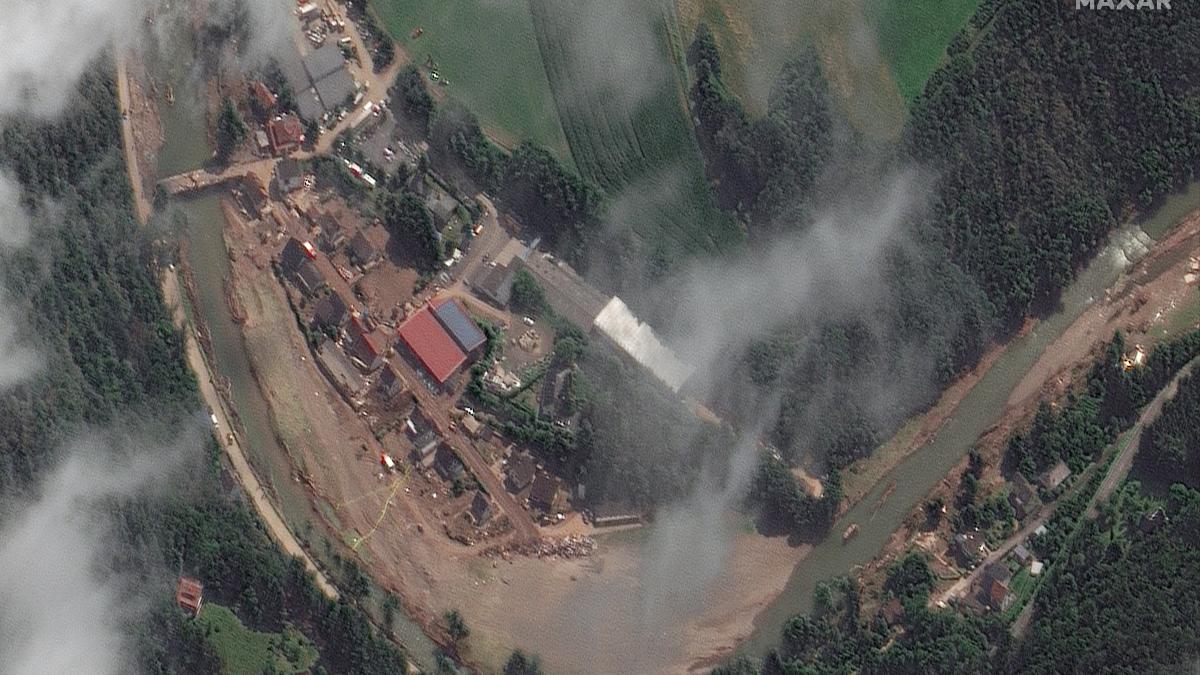 Das water the Erft last week rushed through the streets of the historic old town of Bad Münstereifel, tore the asphalt away with it, undermined the building foundations of the monuments and penetrated every shop, every restaurant, everywhere. What remained was devastation. The town center has been completely destroyed – and with it a large part of the local economy.

Bad Münstereifel was a lighthouse project for the structurally weak Eifel region. The city on the Erft had only reinvented itself in 2014. Investors had expanded the city center as a “City Outlet” with over 30 brand stores and made it known nationwide. Where a week ago branded goods from Bugatti Until Wellensteyn was out, the residents shovel mud and rubble. It is unclear whether the stores can be rebuilt at all. Where foundations have been undermined, drywall renovation is by no means sufficient.

“Closed indefinitely,” says the website the City Outlet Bad Münstereifel GmbH. Reconstruction will take months, and the loss of sales is often not insured. Many industrial plants in the industrial area directly on the Erft have also been destroyed. Like Bad Münstereifel it is also in other places in North Rhine-Westphalia and Rhineland-Palatinate. They are threatened with an economic catastrophe, the financial impact of which goes far beyond the actual damage to property caused by the flood. The economic consequences will continue to have an effect for years.

Because not only the operations directly on the rivers are damaged, but also the infrastructure, which is so important for the regional economy: motorways, electricity, gas and communication networks, railways and federal highways are all damaged for months. The damage to the transport infrastructure has a negative impact on tourism; an insufficiently efficient energy supply also hampers businesses that are not directly affected by water damage – and that have no more reserves anyway due to the pandemic. A wave of bankruptcies threatens.

The first priority of the local suppliers is to restore the basic supply: “We are currently checking every local network station and every transformer station for damage. Even if the voltage is already back on, we can only operate it when we can be sure that it has not been damaged, ”explains Sarah Schaffers from the network operator Westenergie. “Cleaning and repairing with mud is not enough, careful tests are necessary.”

“Much is completely destroyed”

So far, the technicians have not even reached all the stations due to the road damage, which is why the company is now flying them in by helicopter. “The supply situation varies from region to region. Much has been completely destroyed, we are still checking whether there is enough replacement material available. ”In the meantime, the company relies on emergency power generators in order to at least supply the local residents with household electricity. But that’s not enough for industrial companies – if the substation should fail for a longer period because no spare parts are available, this will result in production losses.

Not only the electricity but also the communication networks are damaged. Telekom reports that a good half of all mobile radio transmitters are now working again in its mobile network, with more to follow. Vodafone reports 80 percent availability. But where the fiber optic cables connecting the towers are broken, there is a lack of bandwidth. That is why the providers are now relying on microwave links to enable at least basic communication.

As with the power grid, however, this is not enough for companies that rely on broadband connections. It is unclear when exactly they can be reconnected. “In the landline the situation cannot yet be precisely quantified. The masses of water and debris caused great damage to the fiber optic and copper cables, ”writes a telecom spokesperson. “In some regions, the restoration of the infrastructure will take several weeks.” On the Ahr, Telekom is currently pulling above-ground fiber optic cables for emergency operation, building a parallel network.

The tasks in road construction and civil engineering are also enormous. The pictures from the disaster areas show huge demolition edges in the middle of well-developed country roads. In some places paved paths have completely disappeared. Sewers were washed away, huge concrete elements are exposed.

Important lifelines in the region are separated

Motorways 1 and 61 are expected to remain closed for months, the federal motorway company announced on Monday. Currently, the motorway has to be checked for undermining for kilometers, only after that the repairs could even begin, said a spokesman for the motorway company. This means that two important lifelines in the region, the connection to the city of Cologne, have been suspended for an indefinite period. This has consequences not only for medium-sized companies that rely on transport, but also for tourism. That should be significantly limited, at least for the current summer season, because also many regional railway lines are not passable for the time being, reports Deutsche Bahn.

It seems hard to imagine that the chaos of destroyed asphalt surfaces, concrete parts and bank reinforcements can be eliminated in the foreseeable future. Nevertheless, people in the construction industry are optimistic. First of all, it is a matter of tidying up and setting up temporary arrangements, according to the central association of the German building trade ZDB. “It goes without saying that the construction companies provide equipment and machines as well as building materials so that help can be provided quickly,” said the industry association.

Limited capacities in the otherwise busy construction industry are not a hindrance, says ZDB spokeswoman Ilona Klein: “In some areas of the infrastructure, for example in road construction, there is still capacity in the building trade,” says Klein. In this respect there is a difference to the housing, where building permits pile up in some regions. “In Baden-Wuerttemberg For example, there was a decline in public sector contracts in road construction, ”said the spokeswoman.

In general, the federal, state and local governments have become more cautious when placing orders in the wake of falling trade tax revenues during the Corona crisis. “On the other hand, companies have built up capacities. Today has the construction industry around 200,000 more employees than ten years ago. “

Companies are being sought nationwide

However, some companies could step in and put other orders on hold for the time being. “We assume that companies can be found within a short time for the most important work, such as restoring network infrastructure – channels, power lines – who can take on orders at short notice. There will probably also be individual companies that do their current clients will talk about it temporarily in the crisis areas to be able to take over an assignment, ”says ZDB spokeswoman Klein.

However, it is unlikely that everything will turn out the way it once was within a few months. “The first step will be to restore the basic supply. Roads have to be made usable. ”The construction tasks could then“ drag on for months, possibly even years ”.

“Everything on stocks” is the daily stock market shot from the WELT business editorial team. Every morning from 7 a.m. with the financial journalists from WELT. For stock market experts and beginners. Subscribe to the podcast at Spotify, Apple Podcast, Amazon Music and Deezer. Or directly via RSS-Feed.