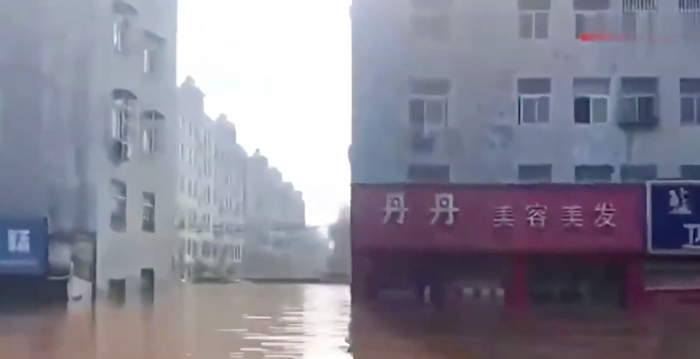 [Epoch Times News on July 28, 2021](Interviews by Epoch Times reporters Yi Ru and Lin Cenxin) Heavy rains in Henan and flood discharge from reservoirs, an image project with an investment of more than 100 million yuanCommunist channel“The water overflows,WeiheThe bank broke, for five consecutive days from the 23rd to the 27th, located in the northeast of Xinxiang CityWeihui, Online help messages continue. The Epoch Times contacted civilian rescuers, volunteers, and local villagers on the 27th. They disclosed that “the 13 towns and villages have too many flooded places, 600,000 people.” “All of them are voluntary private organizations doing it spontaneously. “Send supplies spontaneously, but there is no government to match them.”

Break the flood control standard once in 20 years?

On June 16, 2021, Hebi City Water Resources Bureau issued a press release stating, “Communist channel“The construction of the Hebi section has been completed, with a total investment of 116 million yuan. After the completion of the project,WeiheThe standard for flood control and waterlogging removal in the Hebi section of the “Communist Canal” has been raised to once in 20 years, and the joint flood detention area has been used to reach once in 50 years.

However, the so-called “once in 20 years” and “once in 50 years” flood control standards met with this year’s extremely heavy rain in Henan, which immediately caused disasters.

At 22:00 on July 22, the embankment of Peng Village, Xin Town, Jun County, Hebi City, collapsed and broke on the east bank of the breach.WeihuiFlood storage and detention areas such as Liuweipo and Changhong Canal were flooded.

On the morning of July 23, the “Communist Canal” flooded into the Weihe River, and Weihe River has already seen multiple bankruptcies.

Weihui, a city along the Weihe River, is a city with a history of thousands of years. It was a pastoral land in Gyeonggi during the Shang Dynasty and Jiyi during the Warring States Period. “The Paper” reported that on July 21, four reservoirs in Weihui City had overflowed. The staff of the Weihui Flood Control Center said, “It was flooded too badly,” and the Emergency Bureau was soaked in the water to work.

On the morning of the 27th, the reporter contacted Ms. Li in the former Liliangtun Village of Shangweihui City. She said that they had been trapped for five or six days and had just been transferred to the resettlement site. All the furniture in the house has been soaked. The water in the house is as shallow as knees, and it may be one or two meters deep.” “Now the water level has not dropped. It’s just rising.”

The citizens are angry: Did the Weihui City Government save us?

There was a lot of scolding on the Internet. Some citizens said, “We Wei Hui is a victim. When Zhengzhou just started flooding, we initiated a first-level response. After Wei Hui was completely flooded, the municipal party committee secretary also sent a video to advise Wei Hui people not to be nervous.”

A netizen said, “The result of the overnight meeting was that the whole city was evacuated. I dare not say it bluntly. How did we escape? Watching the group and watching friends forwarding. We are all helping ourselves. Has the Weihui City Government rescued us? “

Some citizens said, “July 26 is the day for the whole city to flee.” “The flood flooded Weihui for 60 hours. The government did not warn or notify, and the people were not allowed to make preparations in advance. They left it to the last moment. The common people fled in a hurry.”

On the 27th, the reporter called the emergency number of the Weihui City Government several times, but no one answered it.

After the military took over the rescue, the non-governmental rescue team entered the disaster area for the second time

Mr. Yang, the leader of the civilian rescue team, told The Epoch Times, “(The disaster) is very serious, very serious! I don’t know the specific number of people (transferred). The masses have been moving, and they haven’t stopped until now!”

Captain Yang said, “The entire Weihui City has been flooded. Now the entire rescue scene is chaotic. There is no one to command and no one to respond. It is all non-governmental voluntary organizations doing (rescue) this thing spontaneously.”

Captain Yang also revealed that the government is not doing anything. When the military comes, the people will withdraw, but they have not really responded to the people. When it was almost done, the military came to take over. After the takeover, there was still no one to answer (response), and we all evacuated. There were so many calls for help this morning, and we entered the disaster area for the second time.”

“The highest (water level) has reached people’s necks, and the two-story houses are gone. They are all submerged.” The leader of the civilian rescue volunteer team, Ms. Wang, told The Epoch Times that in such a difficult situation in Weihui City, it still Some people took the opportunity to make money from disasters. There were vehicles from other provinces with disaster relief banners hanging on them. When they arrived, they tore off the banners and dragged a car for 2,000 yuan. They could make 50,000 to 60,000 yuan every day. Take the opportunity to make money here.

Ms. Wang said that she received phone calls from some trapped villagers yesterday, saying, “Help us! Many of us can’t get out of it. You see, they are so black-hearted, they make so much money a day, and there are many people in it. If we are trapped, we can’t save it.” “It’s not that we volunteers don’t save, but that we don’t have the ability and the government has no connection. The villagers have always been saving themselves.”

A business owner told her, “Some donated materials cannot reach the people. Some village heads and party secretary who have not suffered from the disaster took these relief supplies and diverted them privately, and took them to their own homes. , Just take these things and sell them.”

“If you are at the scene, it is really chilling to hear this. Now many people can’t eat, but they take these things to their homes and sell them.” Ms. Wang said.

Three questions from volunteers who have transferred a large number of people who lack supplies: Is there no government connection?

Ms. Wang said, “The patients in the hospital in Weihui are all pulled out and they have been scattered to the hospital in Xinxiang City.” “The water in the city is still rising. Now most of the residents have been rescued. All settled.”

“What we urgently need are tents, vegetables, meat, etc., because the kindergarten (relocation site) has placed 200 people, and the weather forecast is rainy today and tomorrow.”

“All the materials and all the things are prepared by myself and bought at my own expense. However, until now, the government has not connected with this kindergarten (relocation site). Therefore, the principal of the kindergarten is also crying, really. It makes people very, very uncomfortable, and no one has met up until now,” Ms. Wang said.

Captain Yang also said, “How can there be no shortage of food for hundreds of thousands of people who have been transferred? However, after the supplies are now shipped, they can’t be received, and they can only contact the pick-up and drop-off through private channels.”

Ms. Wang said that she was just a volunteer who spontaneously went to the frontline gang, but she was very sad to see the tragic situation of the villagers. “For so many days, when I was on the front line, I saw so many people in the water. This is so uncomfortable in my heart that I want to cry!”

“In the face of a catastrophe, you know humanity! Don’t look at Douyin or anything (propaganda). Only when you get to the front line will you know that the victims have been helping themselves.” Ms. Wang said.