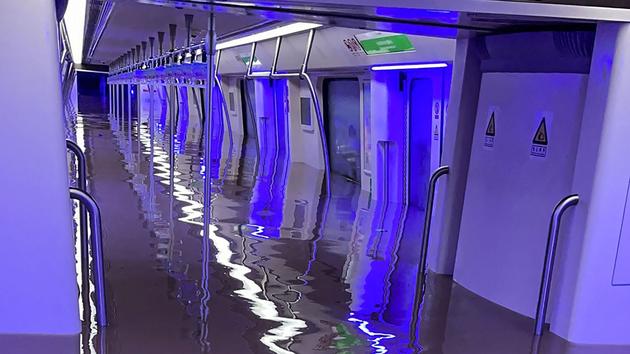 In Zhengzhou, capital of Henan province, it fell in 3 days the equivalent of a year of rain. A phenomenon linked to climate change.

A torrent of muddy water rushes into the metro station. In an oar, passengers are trapped, water up to their torso. Others advance in a flooded tunnel, clinging to a railing. Images filmed Tuesday evening in the subway of Zhengzhou, capital of Henan province, in central China.

“We had water up to our shoulderssurvivor Mr. Zhang told state broadcaster CCTV. The current was so strong that some of us were swept away. ” At least 12 passengers were killed, city officials said.

Earlier in the day, the city of 12.6 million people suffered record showers, dropping 209 millimeters of rain in the space of an hour. For comparison, the city of Cologne, Germany, also hit hard by flooding last week, recorded 154mm in 24 hours.

Images released by local media show piles of cars washed away, a