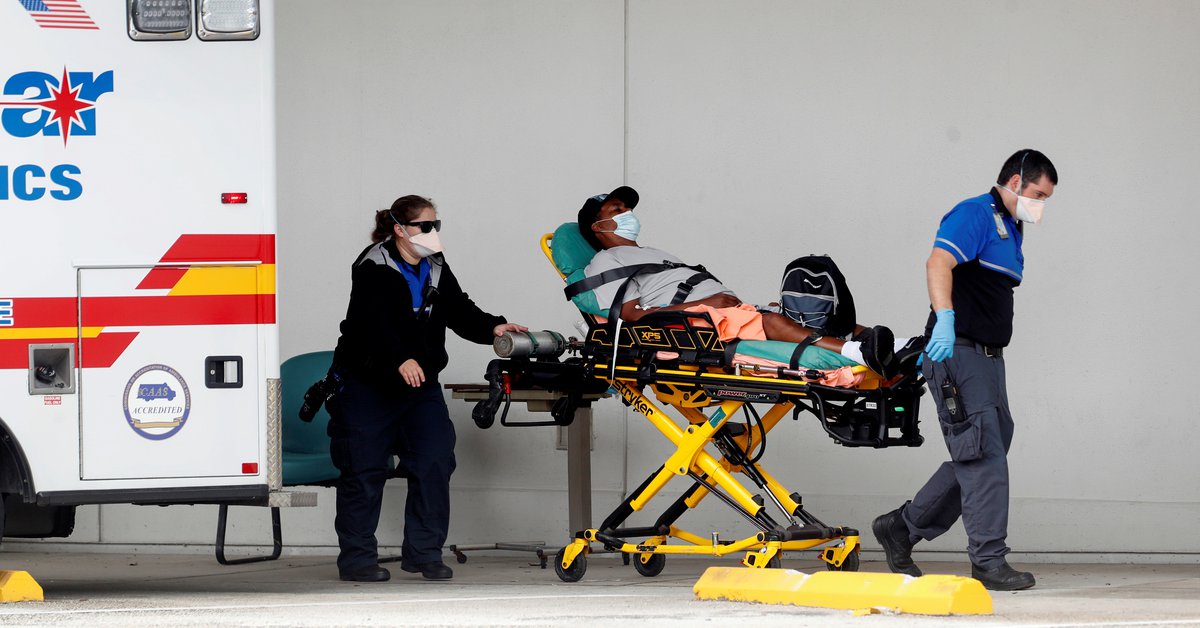 A man is taken to a hospital in Clearwater, Florida. REUTERS / Octavio Jones

Of the more than 11 thousand hospitalized, 2,406 are in intensive care. Currently 40 percent of intensive care beds in the state are occupied, so there is no concern regarding the ability to care for new patients.

What worries at this moment is the speed with which cases are increasing.

“Last year, in 2020, it took us 60 days to go from 2,000 cases to 10,000. In 2021, in just 27 days we surpassed the peak of last year, the increase is dramatic ”, he indicated Mary Mayhew, president of the Florida Hospital Association, in dialogue with the national press of the United States. Mayhew confirmed what has been said from the beginning: those hospitalized are younger than those who ended up hospitalized last year, and the vast majority are not vaccinated.

In Miami-Dade County, the situation has not yet reached the extremes that were seen in 2020, but the situation is getting complicated every day. According to the latest report delivered to the county by 25 of the 29 hospitals in the area, there are 1,421 people hospitalized with COVID 19, 249 of whom are in intensive care.

87 percent of COVID patients in Miami-Dade hospitals are not vaccinated. According to medical experts, in the few serious cases of vaccinated people, there are usually underlying diseases that further complicate the cases.

In Florida, more than 10.4 million people have already received the two doses of the vaccine (or the Johnson & Johnson mono dose), this implies that 49.1 percent of the total population is fully vaccinated.

In Miami-Dade the figures are better. In the most densely populated county in the state, 75.6 percent of the total population has received at least one dose of the vaccine. The figure rises to 87.3 percent if only those over 12 years of age are considered, who are the ones who can be vaccinated. 100 percent of those 65 and older in Miami-Dade have received at least one dose of the vaccine. When considering the number of those who received the two doses, it is 61.6 percent of the general population that is fully vaccinated. This probably explains why the county with the largest number of cases in Florida in the past is now better off than elsewhere in the region.

But beyond those who end up hospitalized, there are many new infected. Vaccinated people can be infected again, but it is difficult to develop severe cases. In Florida, which represents 6.5 percent of the country’s population, 21.6 percent of cases were registered this week nationwide, followed by California and Texas, according to data from the CDC (Centers for Disease Control, according to its acronym in English).

The state average of new cases per day, for seven days, amounts to 17,628 new infections every 24 hours in the last week. If compared to data from a month ago, the increase is 800 percent.

The predominant variant is Delta, which is considered more severe and contagious than previous variants.

The new record of COVID-19 infections in Florida increased hospitalizations: most are young and are not vaccinated
Why it is essential that society be vaccinated with two doses to face the Delta variant of the coronavirus
China once again confined millions of people due to the advance of the delta variant of COVID-19