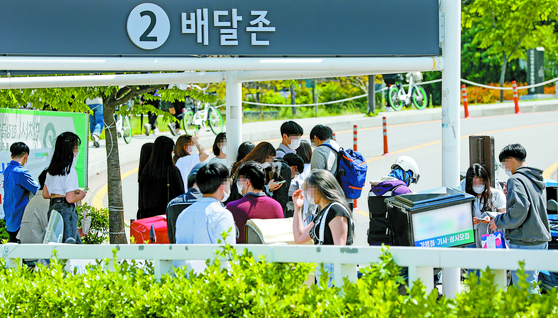 Concerns are raised that similar things could happen to the AstraZeneca (AZ) vaccine after the government’s goal of “three million people inoculated in April” for a novel coronavirus infection (Corona 19) vaccine was stopped. .

Only 180,000 AZ episodes, shortage following Pfizer
The second dose of AZ vaccine begins on the 14th.
Uncertain when and how much additional supplies will come
“I have a problem with overwriting to increase the vaccination rate”

Regarding the cessation of Pfizer’s primary vaccination, Kim Woo-joo, a professor of infectious medicine at Korea University’s Guro Hospital, said, “It happened when the government pulled out the second dose to increase the primary vaccination rate. I’m giving it.” he pointed out. In this regard, the government explained, “This is a phenomenon that occurs when the period of concentration on the first vaccination and the period of increasing the number of second vaccinations repeatedly appear, and the claim that the Pfizer vaccine is running out is not true.”

According to the Corona 19 Vaccination Response Promotion Team on the 2nd, the cumulative primary vaccination at 0 o’clock on this day is 3.35,104 people. Earlier, the government announced that it would complete the first vaccination to 3 million people by the end of April, and achieved the goal in 62 days after the vaccination started on the 29th of last month. It took a week from 2 million to 3 million. Some local governments have made reservations and inoculated at 140,000 people a day. Experts believe that putting irrational numbers like this started to get sick.

In the case of Pfizer vaccine, a total of 2117,000 doses were introduced, and 1.8 million, 1867 doses were used as of 0 o’clock on the 2nd, and 3,15,133 doses remained. Pfizer hits the first hit and three weeks later hits the second. Due to the short cycle, it was burned out due to lack of stock. By the 2nd day, 1,56,865 people received the first vaccination, and 236,02 people received the second vaccination. 1.32 million people need a second dose. It cannot be covered by the current inventory. This is the reason why the first new vaccination was stopped. More than 2 million elderly people over 75 years of age have not yet been given the primary vaccination.

From this month, 1.75 million batches are scheduled to be distributed over four weeks, and an additional 3547,000 batches are planned to be introduced in June. If you follow the schedule, you can write about 5.56 million times by June. However, the specific introduction schedule has not been confirmed. The government explains that “we will arrive on schedule this week.”

The AZ vaccine is also fairly straightforward. Two million episodes have been entered so far. As of 0 o’clock on the 2nd day, 18,29239 people had the first vaccination, and 17,6761 doses remained. Even assuming a 20% more hit with a minimal residual syringe (LDS), there were about 200,000 cycles left. With this, you can barely receive the primary vaccination for residents and workers in nursing hospitals and facilities, workers in medical institutions, and essential human resources in society.

On the 2nd, a holiday, citizens are receiving delivery food ordered at Hangang Park in Yeouido, Seoul. [뉴스1]

However, the government is in a position that there is a little more room for supplies. The team explained that if the least residual type of syringe (LDS) is used to the maximum, it has the capacity to inoculate 381,000 people. The promotion team said, “By the 1st to 2nd week of May, the remaining 230,000 people will be vaccinated among those who consented to vaccination and who made reservations.”

However, the AZ vaccine is also starting the second dose on the 14th of this month. After the start of vaccination on February 26, the second cycle (11-12 weeks) returns. By the end of next month, about 1 million people should have a second dose. In addition, starting this month with the AZ vaccine ▶4943,000 elderly people aged 65~75 ▶491,000 teachers in kindergartens, day care centers, and 1st and 2nd grades ▶It is supposed to start a new vaccination to 12,000 people with chronic severe respiratory disease I was under pressure from one to another.

However, the supply of AZ vaccine is quite jagged. From mid-May to June, it was decided to receive an additional supply of about 8.67 million batches, including 7 million batches directly contracted with AZ and 1668,000 batches through Cobax Facility, but we do not know the specific schedule. For this reason, it is unlikely that new vaccinations will be temporarily suspended. Previously, the government announced that it would use 640,000 AZ vaccines, which were not used for under 30 years of age, for vaccination of the elderly, but the schedule has not been confirmed. 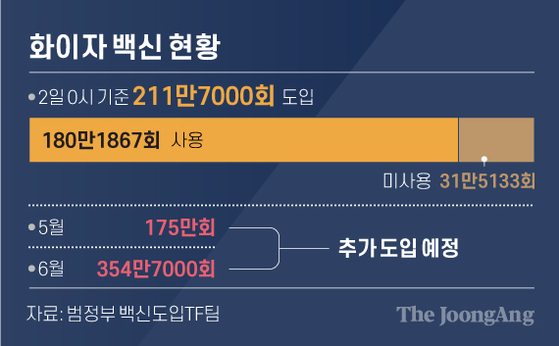 At a briefing on the 2nd, Sohn Young-rae, head of the Central Accident Control Headquarters, said, “In order to enjoy the preventive effect even a little faster in the world, more and more elderly people are using the second dose of vaccination. In this direction, the supply and inoculation plans are detailed so that the 1st inoculation of 12 million people in the first half is completed.” Sohn said, “Pfizer comes in regularly, but AZ vaccine comes in a lot and comes in after a while, so there is no choice but to have some deviations.” The government plans to intensively resume the Pfizer primary vaccination later this month.

Choi Won-seok, a professor of infectious medicine at Korea University Ansan Hospital, said, “In the case of AZ, the preventive effect falls after 3 months after the first vaccination, so it is necessary to establish a supply and demand plan so that the second vaccination can be administered in a timely manner.” Jeong Ki-seok, a professor of respiratory medicine at Hallym University Sacred Heart Hospital, said, “There are two months left until the end of June. For the schedule of at least one month in May, it is necessary to disclose what will be disclosed, and the government should present a bill for the target of 12 million people in the first half.” Professor Kim Woo-joo said, “Don’t be too concerned with the vaccination of 12 million people, you should change your strategy even now, and plan again with the goal of completing the first and second vaccinations only for the elderly over 65 years old depending on the supply and demand of the vaccine.” 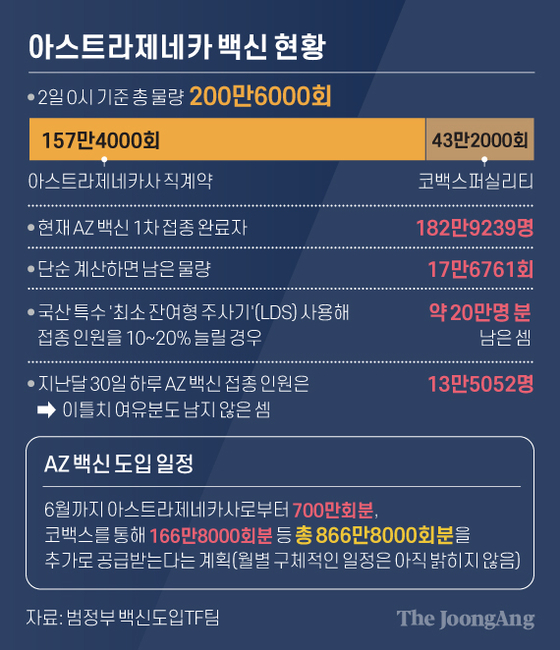 Among these, as of 0 o’clock on the 2nd, the number of new corona19 patients increased by 606, reaching 600 for four consecutive days. Although the number of tests dropped to less than half compared to weekdays (80,000 to 90,000 times), the number of confirmed cases remains in the 600 range. In particular, in May, there are public holidays such as Children’s Day (5th) and Buddha’s Birthday (19th), and family gatherings such as Mother’s Day (8th) can gather, so the quarantine authorities are tense.

Meanwhile, the USFK command said on the 1st that a KATUSA Soldier serving at the US military base in Dongducheon, Gyeonggi-do, was confirmed positive in the inspection before returning to vacation on the 29th of last month. It is reported that the confirmed person received the Janssen vaccine at a hospital in the US military base earlier last month.

See Also:  Burkina Faso is said to arm civilians in the fight against extremists