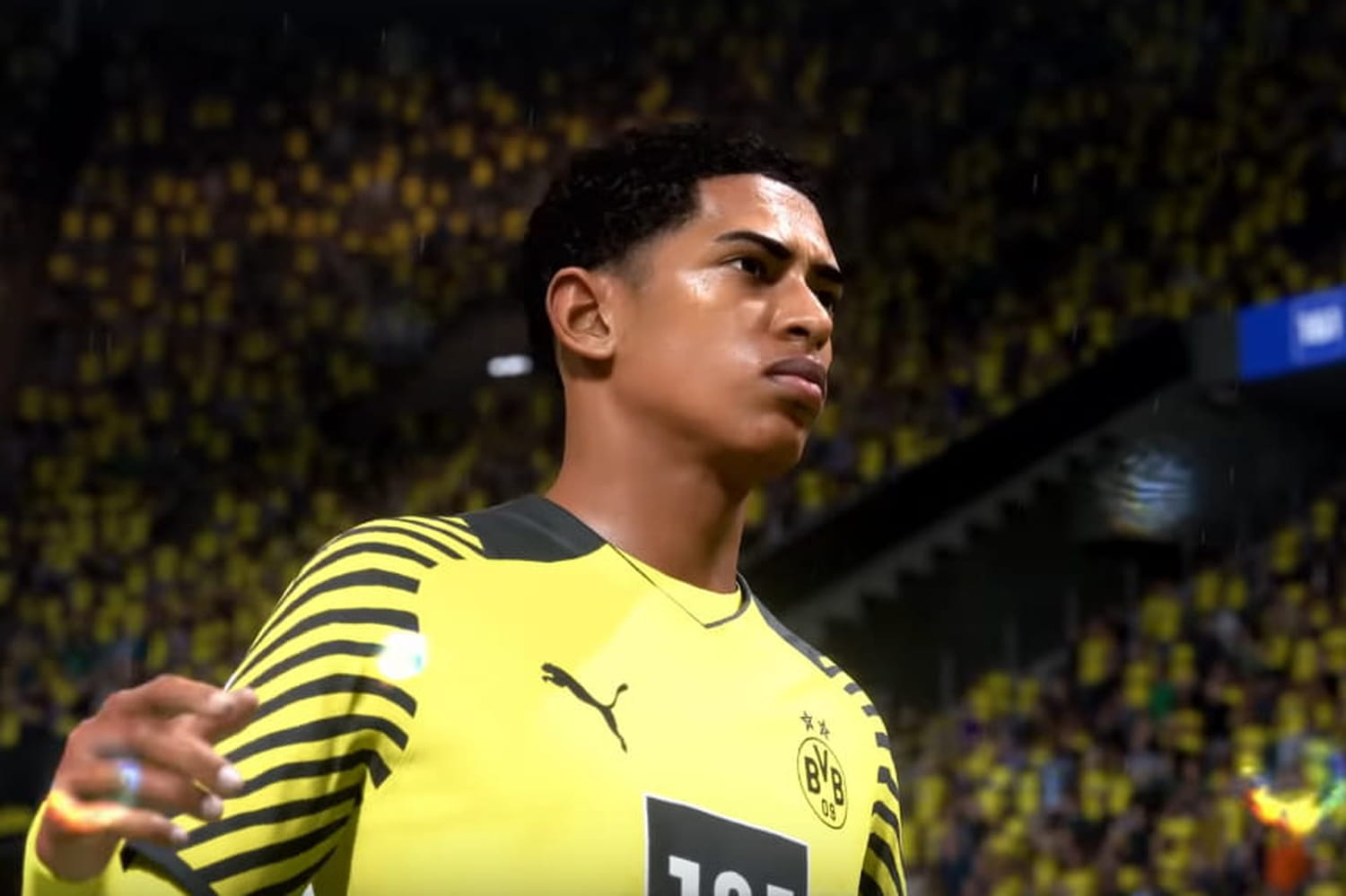 After showing us the first images of FIFA 22 in early July, EA gives us a layer by presenting all the technical innovations of its new opus in a three-minute video. And what we can say is that this simulation has never been so realistic, on new generation consoles.

[Mis à jour le 29 juillet 2021 à 15h41] The past two months have been busy for football fans. La Nazionale has managed to bring the Euro back to Italy, and EA has chosen not to wait for its EA Play before unveiling its next FIFA 22. News, innovations, platforms … We know a little more about this future component who will once again have Kylian Mbappé as ambassador. As a reminder, FIFA 20 was the best-selling game in France in 2020, with nearly 1.3 million copies purchased. To put this a little more in context, one in sixty French people owns a copy of the game. A staggering number which gives our favorite football game the status of a monument in the middle. So what is FIFA 22 and when is it coming?

At a time when a wind of change is blowing on PES, which has decided to rethink its license with a new format embodied by Efootball, FIFA must impress an increasingly skeptical fan base in front of the relatively weak technical and technological progress FIFA titles from year to year. This is why, on July 29, the famous football game license developed by EA decided to give us three minutes of gameplay and explanations in a short video published on Youtube. And it is true that there is something to chat about. FIFA 22 prides itself on the inclusion of many innovations on its “next-gen” versions. And yes, because we must remember, the PC, Xbox One and PS4 versions will not include absolutely any of these great novelties on which EA bases all its marketing. What leave a bitter taste to the many players who have not had the chance to get the very latest Sony and Microsoft consoles.

Electronic Arts has therefore lifted the veil on a few minutes of unprecedented FIFA 22 gameplay, which informed us a little more about the future game and its innovations. Faced with this new information, it is clear that the ultimate FIFA 22 experience will be on the “next-gen” consoles and EA is assuming it. The PS5 and Xbox Series X | S versions will benefit from many innovations that its Canadian developer has decided to present to us in more detail during these three minutes. In the midst of all this information, we can retain some essential points. This version on “next-gen” consoles (we remind you) will benefit from all the advantages of Hypermotion technology. Among other things, it allows more reliable animations, smoother interactions between players, and more realistic offensive and defensive block movements, and a smarter goalkeeper thanks to improved AI. Seen from afar, the difference with FIFA 21 is not necessarily striking. So yes, up close, the animations are beautiful, the controls and the aerial game more faithful to reality, but from a distance, the gameplay is not necessarily changed. We will still note the revival of pre-match tactical options which seem more effective than they were before.

Ultimately, players are waiting for EA at the turn for this umpteenth part of the franchise. This gameplay presentation provided some answers to fans’ questions but was ultimately very light when it comes to raw content, the different game modes for example. Hypermotion, improved AI and physics are effective marketing arguments and could really contribute to the renewal of increasingly repetitive gameplay. We will have to wait to have a controller in hand to get a final opinion, and not just any controller, since the PC, PS4 and Xbox One versions will not benefit from all these technological innovations.

FIFA is a relatively unchanged recipe, and extremely effective. FIFA 22 is no exception to the rule although it has undergone many technical improvements opening the door to a fifth generation of FIFA games. There will be 30 championships, 90 official stadiums and nearly 700 teams. The game innovates technologically, since it was based on technology Hypermotion from EA. As you can see in this trailer, 22 players were fitted with Xsens suits, which were able to accurately capture and transcribe their movements and movements during a match. Nearly 8.7 million images were then analyzed and transformed into high fidelity animations. FIFA 2022 prides itself on unprecedented realism since the Hypermotion could allow the player to make up to 6 decisions per second, and we have to believe it. As for the animations, FIFA 22 should include nearly 4000 more than its predecessor, including interactions between players which should greatly enhance the immersion in the game. Unfortunately for owners of “last-gen” consoles, this technology will not be available. only applied to Playstation 5, Xbox Series X | S editions. The PS4 and Xbox One versions will remain on the previous generation FIFA game, with a title technically closer to FIFA 21.

An important fact to note, the PC version of FIFA 22 will not include the many technical improvements touted by EA in this new ad campaign. Where the Xbox Series and PS5 versions will benefit from an improved graphics engine, with Hypermotion, deformation of the ball and players’ muscles in real time, the PC version remains at the level of the Playstation 4 and Xbox One versions. If we are to believe Aaron McHardy, this choice was made in order to offer a larger number of players the opportunity to access this new title, making it possible to lower the minimum configuration required to enjoy the game. which is not unanimous among PC gamers, who are more used to placing themselves alongside next-gen consoles on multigenerational titles.

Another novelty in this next FIFA, a revisited artificial intelligence which allows to give a little more depth to the defensive game. The offensive and defensive blocks move more logically, allowing more realistic phases of play. EA has also added a tactical sprint in this next installment, which will fundamentally change the one-on-one situations. The goalie’s AI has also been revisited, and new animations will humanize players regardless of their position on the pitch. In short, FIFA has never been so realistic, and it’s a shame that these innovations only concern the “next-gen” versions.

Usually EA releases its annual FIFA around the start of the September school year. This year FIFA 22 will be released on October 1st, while players who have ordered the Ultimate Edition will be able to play it from September 27. In addition, FIFA 22 will be part of the EA Play offer, a monthly subscription similar to an Xbox Game Pass, offering many games and benefits, including access to new releases 10 hours before non-subscribed players. . It will therefore be necessary to wait until the start of the school year before being able to set foot on the lawn of the largest stadiums in Europe. Regarding platforms, no change, since the game will be released on PC, Xbox One and Playstation 4 in its normal version, and on Playstation 5, Stadia and Xbox Series X | S in its version benefiting from Hypermotion technology.

You can already pre-order FIFA 22 on your platform, in version Standard or in version Ultimate. The Ultimate version includes, among other things: access to the game in preview, a FUT hero, 4,600 FIFA points, Kylian Mbappé on loan and the choice of a FUT ambassador player in Career mode. The prices are quite variable, but count 79.99 € on next-gen for the Standard edition against 99.99 euros for the Ultimate edition, while on PS4 and Xbox One it will take 69.99 euros for the edition Standard. On PC, the Standard edition is at 59.99 euros while the Ultimate edition is at 79.99 euros.

FIFA 22 is still expected on “old gen” consoles like the Playstation 4. The content remains basically the same, but some graphics assets may be less attractive to the eye than on the PS5. The game is already available for pre-order on PS4 at a suggested retail price of $ 69.99.

The most famous football simulation game is also coming to the new consoles! If the PS5 is still difficult to obtain, the happy owners of the console will still be able to enjoy an improved version of FIFA 22. The latter will have the best graphics planned for the game, as well as all the content planned for the game. its release next October. The game on new generation consoles is expected at 79.99 euros.

Xbox One owners will be happy to hear that FIFA 22 is also coming to their favorite console. The title, sold at 69.99 euros (recommended retail price) at the majority of specialist dealers, will have nice graphics and all up-to-date staff. You will also find all the game modes and content to come when it is released on October 1, 2021.

As previously stated, the new consoles will also have their own version of the FIFA 22 game, with improved graphics. The Xbox Series X will be able to count on the new iteration of the famous football game in physical and dematerialized format. It is also the latter that will only be available to owners of the Xbox Series S, the 100% digital console from Microsoft.

For Nintendo Switch owners, a new version of FIFA 22 is planned. However, the latter includes the mention “essential edition” already present on the old iterations of the title. You will only have an update of the jerseys, squads and stadiums available. Concretely, this version is only interesting if it is your first FIFA on the Nintendo console, or if you want to have the last game in your machine.

PC players are not left out and will obviously have a version dedicated to them. The PC version is however completely digital, and will therefore only contain a download code for the game. You will therefore need a sufficiently stable internet connection to be able to activate your product and download it.

The content of the game on PC is however complete, and you will be able to enjoy great graphics on your machine. The prices displayed are those of the pre-orders at the time of writing this article. It is quite possible that these prices will change depending on any future offers, as is sometimes the case with certain specialist resellers. Do not hesitate to inquire about the subject, or to cancel and re-order your order to benefit from the best available price.