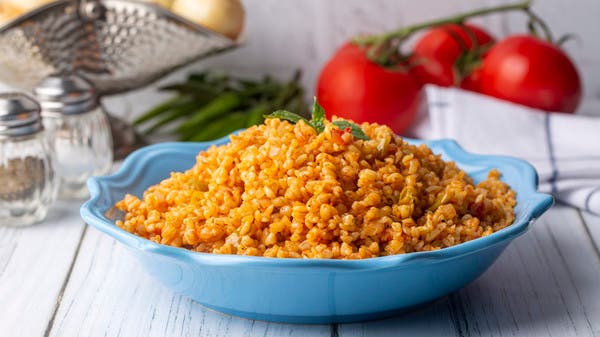 Bulgur or wheat groats, which are boiled and crushed wheat grains, is considered the main food as an alternative to rice for the people of the Levant and before them in the ancient Egyptians.

Bulgur grains are used, especially in the famous tabbouleh salad. And in other traditional dishesIt can also be a delicious addition to several dishes. Bulgur is an important part of the Mediterranean diet, which is often described as a healthy diet.

The tabbouleh salad, of which bulgur is one of the most important ingredients

According to Mind your Body Green, nutritionist Andrea Matisse, compared to other nutritional products, bulgur has a significant amount of health benefits while being relatively inexpensive.

As for nutritionist Amy Guerin, she said: You can get 6 grams of protein And 8 grams of fiber and a variety of minerals, including iron and manganese, in just one cup of cooked bulgur.

For her part, Mattis explained that bulgur is a whole grain, noting that “a diet rich in whole grains can help promote heart health.” Digestion support and balancing blood sugar levels.

A plate of bulgur cooked with chicken and mushrooms

And she continued, “If there is a trade-off between bulgur and rice, bulgur is more nutritionally dense, because it contains a greater amount of nutrients such as fiber and protein, in addition to being a great source of vitamins and minerals necessary for general health.” But she cautioned, “This does not mean that rice should be completely excluded from the diet, but it should be recognized that bulgur has better nutritional value than rice.”

Since bulgur is partially cooked, preparing it to add to any meal is easy. can Bulgur is the main ingredient of the dishesIt can also be added to salads, pasta and soups.

Bulgur is a delicious addition to salads

The bulgur can simply be soaked instead of boiled. “To make bulgur, add hot water to the bulgur and leave it for 7 to 10 minutes. When the bulgur grains absorb the water, they are ready to be eaten,” Matisse advised.

Matisse described other ways to prepare bulgur where “the water can be replaced with chicken or vegetable broth,” adding that “in both cases, a healthy meal is ready in less than 15 minutes.”

As for Goren, she pointed out, “It should be noted that bulgur grains are not gluten-free, so those who suffer from any gluten sensitivity should not eat them.”