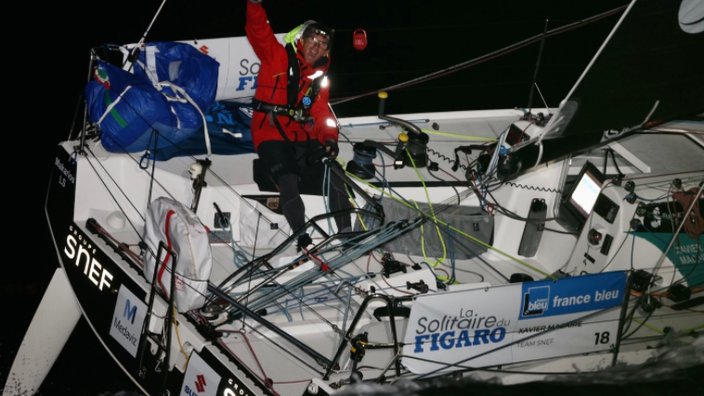 Find the reactions of Xavier Macaire and Tom Laperche, 2nd and 3rd in the Solitaire du Figaro.

Xavier Macaire (SNEF Group ), second 48 minutes behind the winner Pierre Quiroga (Skipper Macif 2019 ) : “The blow did not go far. I said I wouldn’t leave Pierre alone, and I did. It could have passed but no. My goal at the start of Roscoff was to stay on the podium by keeping me on the second step. I am very happy with my stage, with lots of beautiful things. I dared to do my navigation, with my convictions. It is also a good second place on this final stage. It was played out with Pierre Leboucher (Guyot Environment-Pink Ribbon). But he gave me a good smoking blow by standing in front of me.

Things are fine the way they are. No worries. Overall I’m happy with my Solitaire because it’s nice to get a second place, it’s nice to win a stage. To experience emotions with doubts but also joy. By doing things that I am very satisfied with because it was the result of all the work done this season. I also made mistakes but we learn from them. I knew how to analyze them, so it makes me stronger. My program is not defined for the moment but I will come back. ”

Tom Laperche (Bretagne CMB Performance ), third at 2 hours 33 minutes: “It gives me two podiums as I started on Solitaire in 2019. It’s great and I don’t think there have been that many people doing this. Now, of course, I would like to get a better place and win the Solitaire du Figaro remains a dream. It wasn’t this year but I had a lot of fun on the water, I took it a step further in terms of strategy and self-confidence. It’s really amazing as a race and I think there is a small step to be taken. In fact, I have made good progress in my head, I have been able to manage the boat since almost the beginning, on the other hand, it is in the head that there is a lot to learn.

There is not only the Solitaire in this profession.

I’m happy to have been ahead on several stages, to have done a lot of great things. But there were more complicated moments and it must be said that the general classification is clean. It looks like the race. With those who led each round. Pierre and Xavier have more Solitaires than me, so they have more experience. I don’t know if my time will come, I hope maybe someday. The road is long, I am young and there are other opportunities for me because there is not only Solitaire in this profession. This race is super rich, ruthless and hard, where we live incredible moments. This year it was very long, with a large number of days at sea and we made the most of our boats and the atmosphere. It is a huge chance to experience this. All in a good spirit. I am delighted that Pierre wins. We had a great time together last winter, preparing things together. And then, there is the victory of Gaston Morvan (Bretagne CMB Espoir) in the rookie classification. He deserved it because he was clearly above the level. He had the technique and got it right. We will form a good pair next year. ”